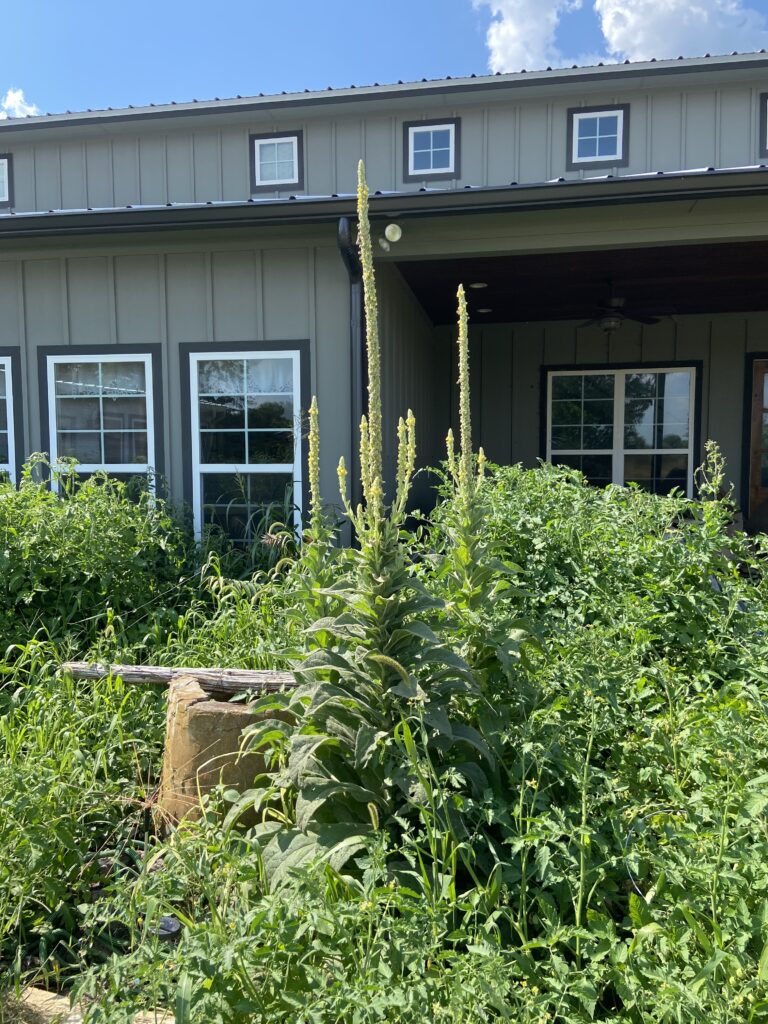 Beauty and Usefulness: Magnificent Mullein Plant is Both

I love learning about how things were done in the past.  The building techniques used on our 1846 Homestead were fascinating.  I learned how to milk goats so I could authentically make cheese.  Winemaking is also on the list of things I have mastered in the name of learning the “old ways”. Now we can add cultivating magnificent mullein plants to the list because of its usefulness and general coolness.

Medicinal herbs and such are fascinating, but I am very much a novice.  As we continue to put in our flower beds and our garden beds, herbs that we can cook with will be featured, of course.  But what about the herbs, plants, wild flowers that would have been grown at the homestead in the 1850s and beyond?  Much of that knowledge has been lost, unfortunately, as we run to the store for a jar of something instead of heading into our garden.  That is okay.  My cabinets are filled with store bought herbs and spices.  It is a luxury.

But sometimes, I see something and I wonder.  This spring was a wet one and that means we had an abundance of wildflowers.  I was thrilled to see these wild masses of color consume the fields around us.  This!  This must have been what James and Isabella saw when they had a moment to enjoy their surroundings.  Of course, the color was beautiful to look at but the 1850s living on the frontier wasn’t the place for mere aesthetics.  Things needed to be useful.

Our sweet cousins were selling their homestead just south of ours last fall.  It was sad and more than a bit nostalgic to wander in the house, the pastures and woods.  It is as close as I will ever get to knowing what our own place looked like before everything was turned into an agricultural area with acres of plowed fields.  So yeah, I wandered and I daydreamed and I did my best to time travel a bit.  I also dragged my children along so they could see it.

On one of these wanderings, we encountered a huge beefy-looking plant that shot up into a spike of yellow flowers.  I had no idea what it was but I did have the weird revelation that this was something I should take notice of.  It was unusual.  I had never seen one before. And, there was only one of them standing alone.  Odd.

I mentioned this to my cousin Connie and she quickly smiled and said that it must be a mullein plant.  At this point, my love of the Outlander book series took over and I vividly remembered reading Claire discussing the usefulness of the mullein leaves…as toilet paper.  Could this beautiful plant’s only use be for wiping?

An Investigation Is Conducted: what is mullein and is it really magnificent? (YES!)

Mullein is actually great used as toilet paper.  According to The Survivalist Blog, people used about 20,805 sheets of toilet paper a year.  (FYI, there are about 1,000 sheets on a roll of single-ply.)  The pandemic shortage of TP saw us hoarding the stuff while preppers were most likely looking at other options.  That was the purpose of the blog article mentioned above.

Mullein is a biennial plant that thrives in partial shade and full sun.  It goes by the names “Cowboy Toilet Paper” and “Indian Toilet Paper” which gives a great clue as to what it has been used for in the past.  It grows over six feet tall and doesn’t have any dangerous plants that look like it.  This means that when I say I found mullein, the odds are that I really have.

IMPORTANT: I am not recommending mullein be used medicinally (or as toilet paper) in any way, shape or form!

Mullein can be used as medicine as well.  A very quick search on the Internet returned that mullein is used by some folks as a topical treatment for some types of rashes and internally for some other issues.  WedMD, which isn’t super keen on herbal remedies, says that mullein is used by some people (not recommended, mind you) for breathing issues like asthma, colds, and even sore throats.  Scientists speculate that mullein may have antibacterial properties that cause it to be effective.

If you don’t have mullein growing in your yard, you can purchase seeds, extracts, teas, and herbal supplements online.  I, of course, wanted to do things the old fashioned way and I went on a search expedition to see if I might have a few mullein growing somewhere on our property.

There were four mullein plants in our yard that had blown in on the four winds.  Most of the yard was being farmed a few years ago, growing wheat, corn, cotton and so on.  Crops don’t like weeds, hence the use of chemical herbicides.  Mullein, you see, is often sprayed in order to kill it.  People are dumb.  The mullein plant is magnificent.  I digress.

Anyway, we transplanted the mullein around the old well.  This seemed like a great idea.  In practice, maybe not so much as the mullein are now huge and the well is completely obstructed from view.  We will have to transplant any baby mullein and give them more space.

The mullein survived the big arctic blast Texas had in February.  We suffered through two very uncharacteristic weeks of below freezing temperatures.  The mullein, without any straw or mulch, sweetly remained green and lovely throughout the yucky weather.  It seems to be impervious.  Lucky me!  Mullein is also not very picky about soil type.  It does well in drought conditions.  Mullein grows quickly.  It really is the perfect plant.

I don’t know what is going to happen next with the mullein.  I love it and so we purchased seeds so we could grow more.  Unfortunately, all the baby mullein died.  They sprouted and got secondary leaves on them and then they keeled over…magnificently.  UGH.  We still have many seeds left and will probably try again.  I am also hoping that the plants do the natural thing and drop all of these tiny seeds and we get plants that way.

Regardless, I am committed to growing magnificent mullein in my garden from here on.  It is beautiful and just so, well, magnificent.  What other flowering plant grows so quickly, so tall, with little to no care or water?  It is the best addition to our garden!