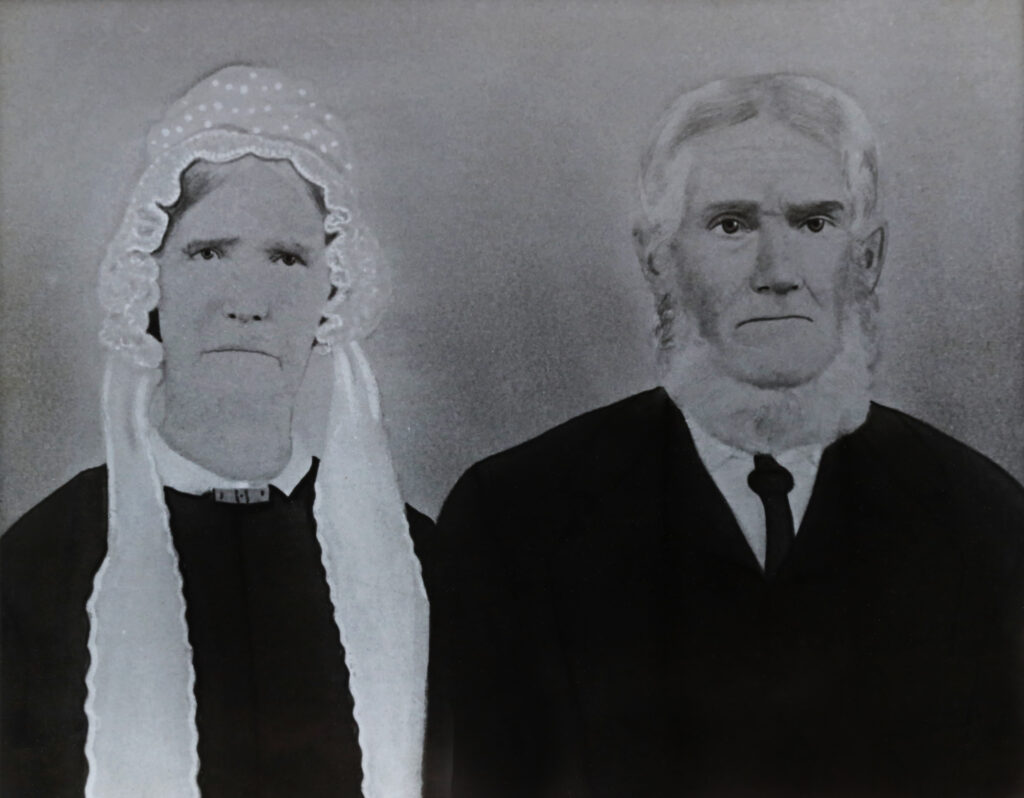 Scottish immigrants, James and Isabella Wood, arrived in Texas in 1851.  They, and their children, contributed to the success of Hill County and are an important part of Texas frontier history.

In 1850, James and Isabella made the decision to sell their dairy farm in Scotland and purchase land in Texas, near present day Lake Whitney.  The new city was to be called Kent and the first settlers arrived there in the fall of 1850.  James, Isabella, their children and the thirty-some-odd people traveling with them were set to arrive in the late spring/early summer of 1851.  The Universal Emigration and Colonization Company was combing the British Isles in search of emigrants.  Scotland was a likely place to find them.  Scotland’s economy was not doing well.  Farms were failing.  Impoverished Irish were flooding into the cities of Scotland and England looking for work.  Highlanders were being transported to Australia.  It was a desperate time.

James and Isabella realized, I believe, that life wasn’t going to get any easier for them and certainly not for their children.  There three sons would need a way to make a living.  The dairy farm would support one large family, but what would happen to the children who didn’t inherit it?  James’s brother, Hugh, was a surgeon in Sheffield, England and so we know that education and a non-farming career were options for this family.

However, the decision may have been as simple as they wanted adventure.   Land agents were extolling the virtues of Texas.  Rich land, plenty of it, and cheap.  Maybe that was all it took to get them to decide on making the move.  James sold the farm in Scotland for $485 an acre and bought land in Texas for ten cents an acre.  That must have seemed quite the bargain.

The Journey to Texas 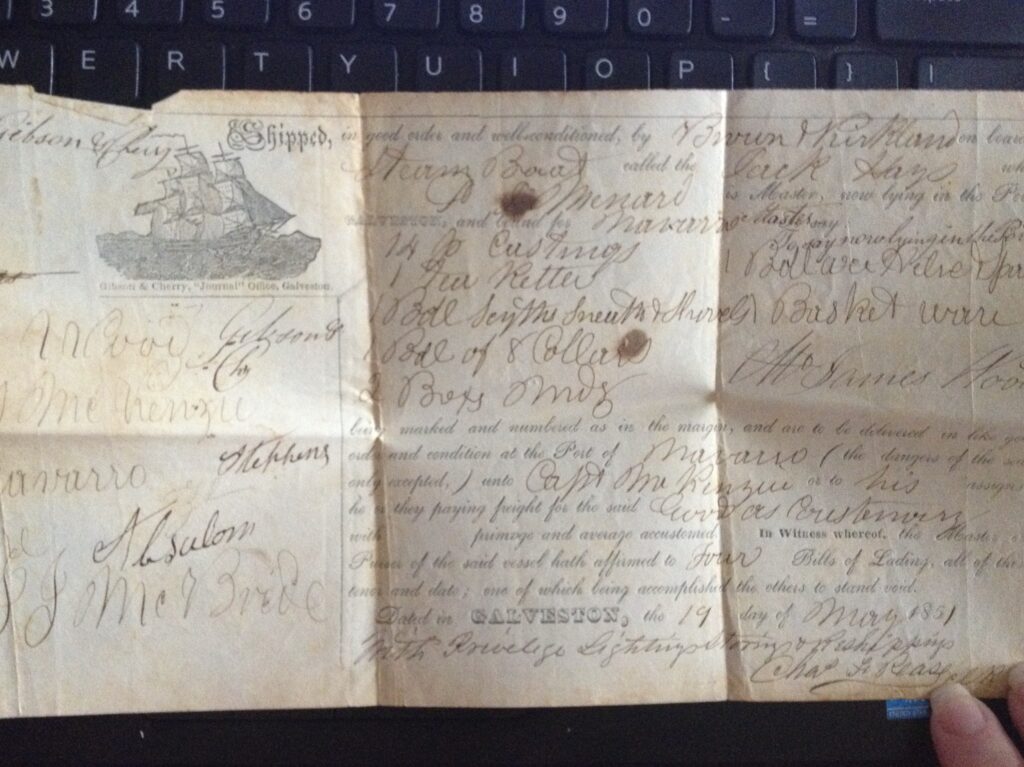 Either way, the preparations for the journey were extensive.  Decisions about what was necessary, and what would be a luxury, were made.  What did you need to start a life on the Texas prairie?  The shipping invoice from Galveston showed that there were shovels, scythes, and other tools.  Basket ware, books, clothing, cooking items and small furniture.

The Woods and the people traveling with them arrived first in New Orleans, Louisiana and then traveled by paddle wheel boat to Galveston, Texas.  In Galveston, they were to travel up the Trinity River to the Port of Navarro.  Unfortunately,  the river was too low to be navigated and the company was landed near Moore’s Bluff in present day Leon County.  The leader of their expedition, Capt. Charles MacKenzie, left the travelers here for about two weeks and went to hire wagons and oxen to complete their voyage to Fort Graham.

Tragically, the settlers drank the only water available to them.  The water was stagnant and they soon fell ill, and many died.  One family, the Park family, lost both parents, orphaning four children.  Isabella Ferguson penned a letter to the parents of Mrs. William (Frances) Park following the latter’s death.  In this letter, we get a clear understanding of what transpired on their voyage from Scotland beginning with their arrival in New Orleans and ending with a brief description of the conditions at Ft. Graham.  An original image of this letter can be found at the Heart of Texas Tales website.   Here is a typed transcription of the letter that is easier to read.

The letter details their travels, the illnesses encountered and when the sick succumbed.  The point of the letter was to ask Mrs. Smith, the grandmother of the orphaned Park children, what she would like for the Woods to do with the children.  Send them back or adopt them.  I can’t imagine receiving that letter and I wish I had a copy of the response.

A New Plan, A New Start

James and Isabella and their family remained at Fort Graham for a year.  The Colony of Kent, a new settlement lead by Capt. MacKenzie and the Universal Emigration and Colonization Company, had already failed prior to their arrival.  The terms of the contract between the land owner and the organizers provided for the land to revert back if the colony failed.  So, when the Woods arrived, they found that the land they had purchased had already reverted back and they had to determine their next move.

James’ brother, Hugh, wrote and encouraged them to find a place where they could be safe and prosperous.  In his letter, he listed the options of returning to Scotland, relocating to another (Hugh said “older”) state, or to find something suitable in the local area.  Hugh mentions “Wyman’s cream-pot” and tells James that, if it proves to be the ideal situation for the family, they would do what was needed to ensure the purchase.  James and Isabella purchased the Elisha Smith Wyman homestead a few months later.

Three of the Woods’ children died en route to Fort Graham.  Little James was buried in a small grave in a grove of trees.  His two sisters, Janet and Martha, were too ill to go to his graveside.  Sister Christina had already passed away.  Upon arriving at Fort Graham, the Woods were relieved to find a capable physician, Dr. Josephus Steiner,  in residence, but he was unable to save Martha who died less than 24 hours after arriving there.

Son Hugh went to make his fortune.  He found work as a teamster for the U.S. Army.  Hugh sent letters home to his mother and sisters telling about his plans and what he was doing.  He wrote to his sister Isabella about his sweetheart and how much he loved her and wanted to marry her.  Huge found himself caught up in the Mormon Wars and, while he continued to write home, he told his mother that he feared he would not see her again in this world and that he would come home as soon as “Brigham Young will let me.”  Sadly, he did not leave Utah alive.

The younger son, John, followed many of the young men (to include the husbands of his sisters) into service in the Civil War.  He became ill and died in Cloutierville, Louisiana.  His saddle and horse were returned to his family.

That left four daughters.  Margaret Wood married James Ransom Davis.  Janet Wood (also known as Jeanette and Jeanetta) married Benjamin Ward.  Jane Wood married Monroe Fraser.  Mr. Fraser left for the Civil War, but became ill and returned home two months after he left.  He died from his illness.  He was 28 years old.  Jane gave birth to their last child five months after his death.  She then married John Patterson who had immigrated from Scotland with them in 1851.  Isabella Wood (the daughter) married Robert Andrew Ferguson.  These four daughters are buried in the local cemetery which can be seen from the home they occupied with their parents.

The Wood family adopted two of the Park children after their parents died.  Archibald (Archie) went off to war with the other boys from the county.  He was captured in Louisiana, marched to Mississippi and transported to the Union Army’s prison camp in Elmira, NY.  Archie became ill there and was exchanged.  He arrived by boat in Richmond, Virginia and died the following day in the General Hospital No. 9.  Archie Park is buried in the mass Confederate grave in Hollywood Cemetery in Richmond.

His sister, Lillias Park, married the nephew of Robert Andrew Ferguson.  She and her husband John Ferguson had three children.  Lillias and her daughter became ill and died within a few days of one another.  They are buried in the Milford Cemetery alongside James and Isabella Wood, John Patterson, and two of James and Isabella’s grandchildren.