Once Upon a Time…

Once upon a time, our home was a simple four room dog trot house.  It had one door in the front and one in the back.  Those who lived here before us eventually needed to center, open hallway space and they enclosed it, leaving the front porch open.  It was easy for people to see how to get into the house.  See the gate above?  Go through it.  Walk carefully on the (mostly) flat rocks that lead to the front of the house.  There is one door.  Knock on it.  While there wasn’t a real side walk and no need for front steps, it was welcoming.

And then, the Burch Family purchased the home and added on a bit.  Now, the home boasts five exits.  The old house didn’t have front steps or a sidewalk and so people were naturally confused.  “Do we walk through the grass and climb up?”  or “Do we park near the cars and hope there is a door somewhere?” (The entry to the house nearest the garage is on the side of the house and people can’t see it…this leads to a bit of a leap of faith.)

The Time Has Come…

Like everyone else in the world, we are busy.  We want our home to be welcoming and no, we don’t want people to have to wade through mud or weeds and then climb on up.  We knew we needed to install a sidewalk and front steps and that until those items appeared, the house wouldn’t be as welcoming as we wanted it to be.

The building process took 15 months.  After that, we needed a break and we needed to focus on our real jobs (you know…the ones that pay the bills?)  And, unfortunately, we lost the bubble.  There was always something else that took priority.  Almost two and a half years after moving in, the front steps and sidewalk became realities and the house was ready to safely and conveniently welcome guests through the front door.

The front steps were a bit of a family affair driven by a scheduled event the first week of December.  Timing is everything and so, Thanksgiving weekend, we had John, Beth, Jillian, Jacob, and the grandchildren here to help pour the foundation for the steps.  Jillian was here to help her dad get the steps started and Jerry, bless his heart, had them all finished prior to the December event.

The steps are made of Austin stone that was left over from the construction of the chimney on the addition (the interior stone the original material from the 1846 Homestead fireplaces.  They are not super smooth and that is fine by us because they look like they could have been here forever.  They aren’t perfect, but they are functional just like the builders would have made them. 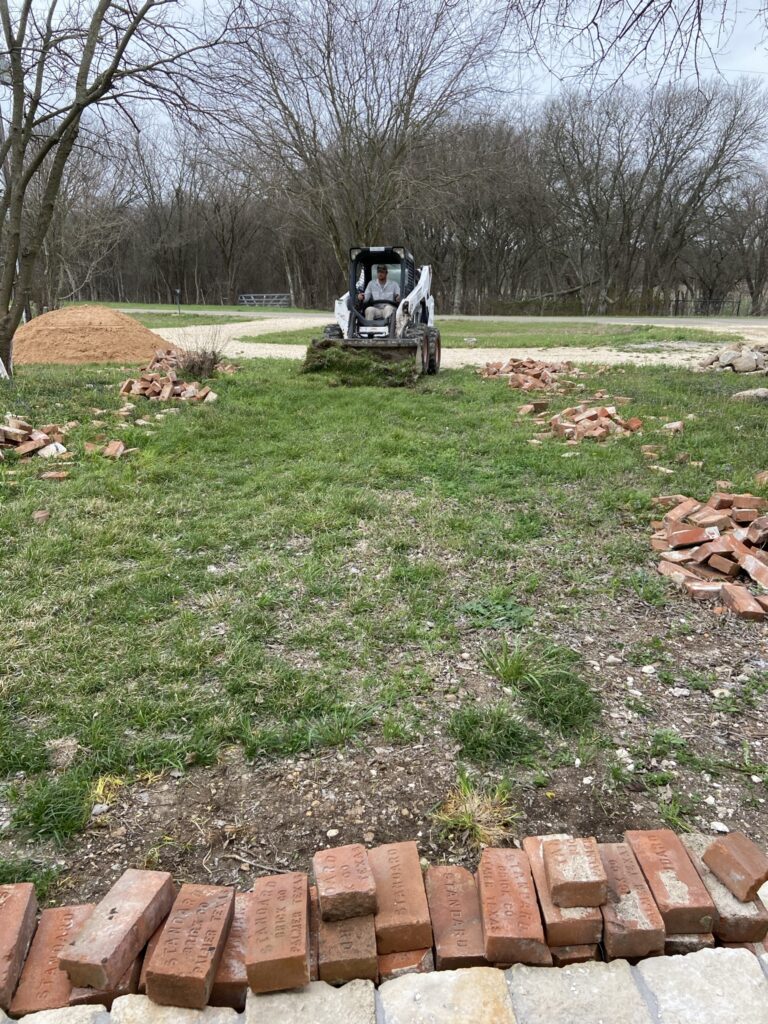 Can We Work Smarter Instead of Harder?

We got soft during our hiatus and I confess that I wasn’t excited about our upcoming project.  While scrolling through Facebook, I saw an advertisement for a backhoe and driver.  $400 for a half day of work.  I wondered if we couldn’t hire the young man to come and do all the stuff we were going to have to do with a shovel and wheelbarrow.  After an initial negative response, Jerry agreed to hire the help.  Boy, am I ever glad we did!

There were several related projects that needed to be tackled at the same (sort of) time.  When Wesley arrived with his backhoe, he used the road base to repair the driveway.  He scraped the pathway for the sidewalk.  Jerry and I loaded old stones from the chimneys and Wesley moved them into place for the next project.  It was a tremendous amount of work and really set the stage for Jerry and I to be able to finish several projects in record time. 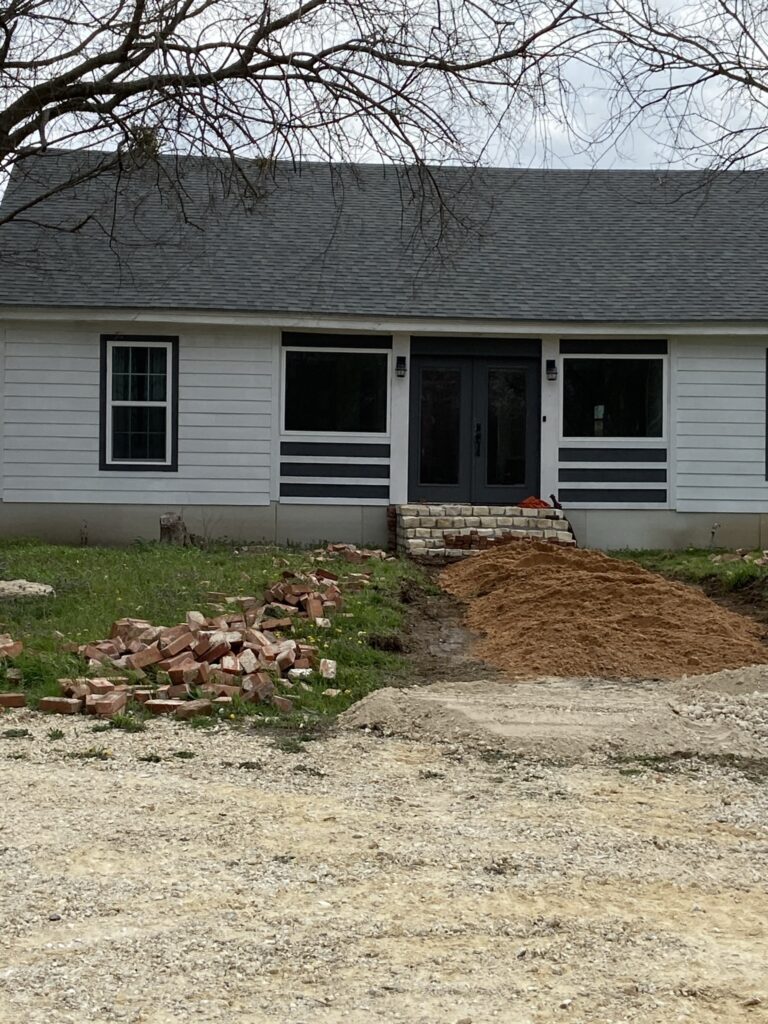 Our cousin, Connie, had a pile of antique bricks left from when they had their chimneys taken down.  We bought the bricks from Connie and braved the possibility of snakes.  Jerry’s new truck (the one we purchased to replace the one we trashed hauling stuff while building the house) was unfortunately the only thing we had to haul the bricks and so we very carefully loaded them (repeatedly) into the bed of his truck and brought them home.

I don’t mind working, but laying brick is hard.  Jerry knocked the mortar from the bricks and I sat in the sand trying my best to keep things level.  Of course, I wanted a fancy pattern, not that what we did was fancy.   And, if you know me, you know that I have a bit of perfectionism and a few OCD tendencies.  That means that I worried about which bricks I was using.  There couldn’t be too many dark ones together or too many ones with “standard” written on them.  While I pondered this, Jerry steadfastly chipped mortar.

Without a doubt, we are very pleased with the finished product.  I am finding that my perfectionism and OCD tendencies are helpful.  Both keep me honest and doing the best I can with my limited skills.  However, I am also learning that the imperfections are what make the house charming and help the changes we make blend with the house.  That is a philosophical discovery I am learning to live with (and even embrace).  It is okay if everything isn’t perfect.  Find a way to love it anyway and move on to the next adventure.