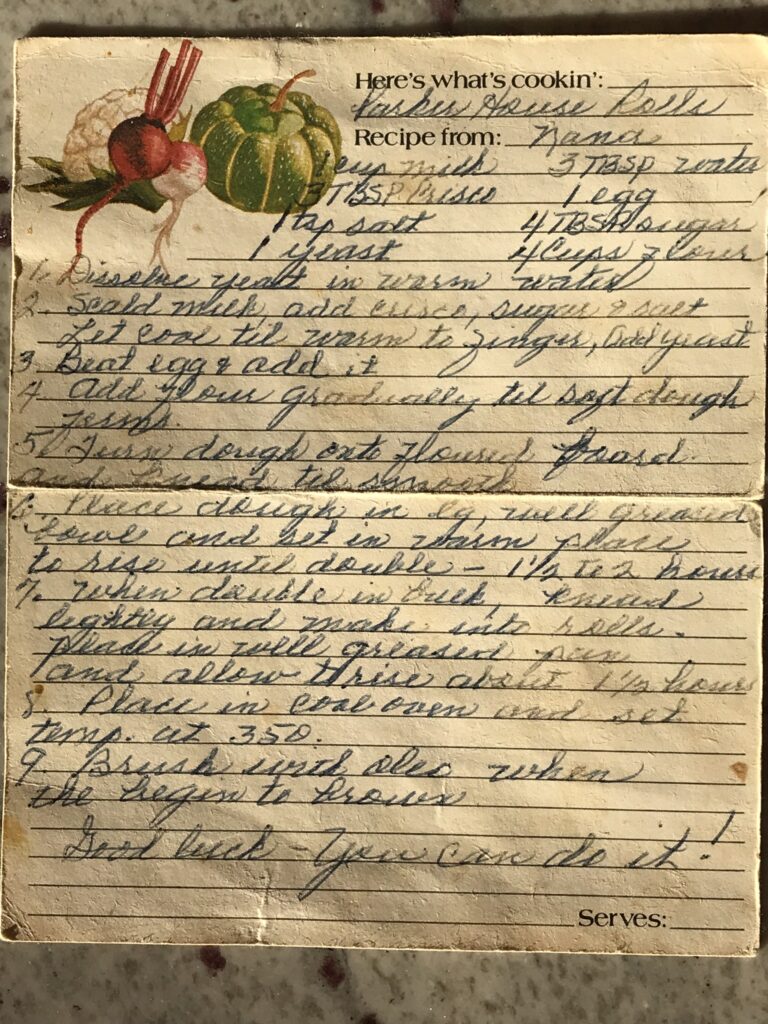 Nana made yeast bread most Sundays and every holiday meal.  Her Parker House Roll recipe (pictured above) was especially delicious.  Buttery brown tops that were just the right mixture of soft and chewy.  So good in fact, that my mother would grab another roll with honey instead of dessert.  I took it for granted that, like other things she made, that I would be genetically blessed with her ability.  Nope.

Suddenly, I was grown, and living far away from home for my first Thanksgiving as a married woman.  To make things more interesting, my in-laws came to celebrate that holiday with us in our one-bedroom apartment.  The kitchen was what my Nana would have described as a “one butt” kitchen, meaning that there was barely room for one person to turn around in it.

I called and asked Nana and my mom for the requisite holiday recipes.  Parker House Rolls were number one on the list because, if you were going to do a Nana holiday meal, you needed to get the rolls rising early in the morning.  Nana sent the recipe (again, pictured above)…a painfully detailed recipe, with a “Good Luck!  You can do it!” message at the bottom.

She was right.  I could do it and I did do it.  Whether it was nostalgia or her superior experience, my rolls never turned out as good as hers.  They would rise sometimes, sometimes not.  They were tough (too much flour?), sometimes not.  I gave up making the dough by hand and made it in a bread machine.  Then I would remove the dough and form the rolls.  Still…it was hit or miss. And I did try.  Look at the worn condition of the recipe card!!!

The frustrating thing about bread making to me was that it made a huge mess in the kitchen and that wasn’t a problem if you were getting great results.  When the results are not guaranteed, it makes it not as much fun.  When there is failure, the disappointment is just terrible.

All in all, I don’t have to have bread.  I am not a huge bread eater like my mom.  Passing up a hot buttered roll is no problem for me, but it was really annoying that I couldn’t figure out how to consistently do something, especially with what I knew to be a great recipe.  When Nana went into the nursing home, I made sure to ask for her roll pans.  That didn’t help and so it was time to figure something else out.

Where There Is a Will, There is a Way

The love of bread wasn’t what was motivating me.  I do hate failure, though and wasn’t ready to give up on bread making.  Mainly because making bread is something that was commonplace for our ancestors.  In every culture, people make some kind of bread.  It was a staple.  I didn’t want to contribute to a generation of failures by not figuring this out.  Skill is a great thing and my Nana had it in spades.  What I needed was to find MY bread method and recipe.  Turns out, I got lucky…finally.

Tried and true methods are worth their weight in gold.  There is nothing worse than spending time on something that disappoints.  I needed a new plan for bread making.  The answer was found in The New Artisan Bread in Five Minutes a Day: The Discovery That Revolutionizes Home Baking

by Jeff Hertzberg and Zoe Francois.  I found the book on Amazon and I did purchase the plastic tubs suggested with the book.  Worth every penny.

It Really Is a Miracle Recipe

Yes, five minutes a day.  That is for the preparing of the bread for baking.  We actually timed it once and I can get a batch of dough mixed up in about seven minutes if I hurry.  The time commitment is perfect for me especially since their basic recipe has never failed me.  Always rises.  Always beautiful. 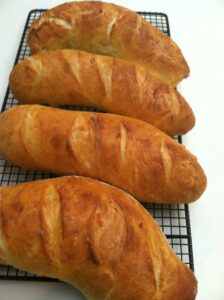 But still, there was a fly in the ointment (or dough) and that was when I made the dough, I just made the loaves.  Four of them at a time.  We never ate them all and there were eight of us dining nightly.  Now the issue was that I am making bread and it is going to waste.  The recipe says that you can refrigerate the dough and bake over several days.  However, Jerry said that the texture of the bread changes if you don’t bake the day you first make the dough.  He was right.  It wasn’t as good.

A Discovery Is Made

During the several months we spent working on our 1846 Texas Homestead Renovation, I hadn’t done much beyond get food on the table.  This week, I wanted to make bread.  I thought that, if I was going to start making cheeses again, I needed to brush up on that dough recipe and I also wanted to see how our new ovens performed.  This time, instead of making the four loaves from one batch of dough, I looked a bit further into the cookbook and was somewhat ashamed of what I found.  Yeah, other recipes for other breads made from the basic dough recipe.  Total. Embarrassment.

Yesterday afternoon, I made a batch of the dough.  Just before dinner, I went in and made three naan loaves, one huge artisan loaf, and a rosemary focaccia.   We whipped together a Chicken Tikka Masala recipe for the Instant Pot that only cooks for 10 minutes and devoured it with all of the Naan.  This morning, I sliced some of the loaf and made buttered toast. 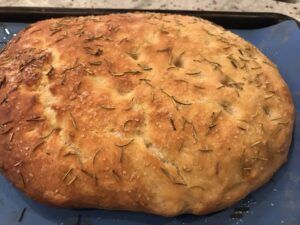 We ate most of the focaccia for lunch with a White Bean, Tuna, and Pickled Red Onion Salad.  It sounds crazy, but what eight people couldn’t manage, the three of us have almost taken care of in three meals.

Now, that brings about another problem.  I will be as big as a house if we continue to consume this much bread on a regular basis, but, because we live in a very rural area, shopping options are sometimes a bit thin.  Being able to plan an Indian meal with authentic, fresh Naan is a real treat and so is the focaccia pared with something Italian.

We will just need to pace ourselves on bread consumption.  I hope that we are able because there are a lot of dough recipes in this book and a lot of really fantastic variations for each.  I’ll let you know what we discover!