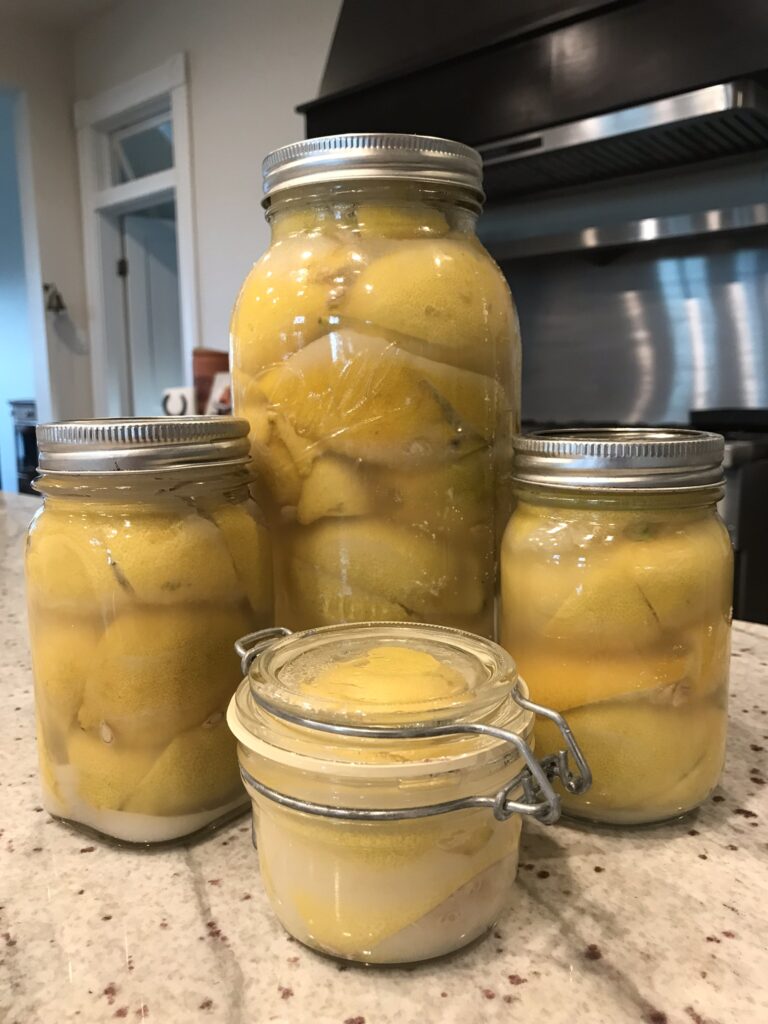 I had never heard of preserved lemons until I wanted to make a Moroccan chicken recipe.  Of course, the recipe called for preserved lemons and the cookbook helpfully included the recipe for the lemons.  Some would say that I am a planner.  I make lists and I use sticky notes, but doesn’t everyone?  I do not however, plan my meals three weeks out.  And that is how long it takes to preserve lemons.  The recipe called to me though and I had continued to put off making it because of those danged lemons.  There was only one thing to do.  Make the lemons and have them ready and waiting the next time I got a hankering for Moroccan chicken. 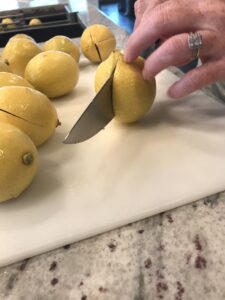 After a scrubbing to remove any wax on the lemons, the lemons had to be cut into fourths.  However, you don’t cut them all the way on one end so that they fan out.  This seemed pretty important in the instructions I was following and so I carefully made my cuts.

The lemons were then gently packed with salt…lots of salt and then were forced into a sterilize glass jar.  The trick was that you were supposed to pack the lemons in so tightly that you extracted enough juice to fill the jar and cover the lemons.  This proved to be difficult as I couldn’t get my hand into the jar easily and that made packing/squeezing the lemons nearly impossible.

I also made the mistake of using the little flip top jar.  There was salt on the rubber seal and it wouldn’t stop leaking (a problem since you are supposed to turn the jars over every three days to keep bathing the lemons in salt and juice).  I cleaned the seal, but it never did work for me.  I used these lemons first and will not use this jar again for this purpose.

Exactly three weeks after I made the lemons (the minimum time for them to cure), I made the Moroccan chicken recipe.  Well…that presented another problem.  The recipe called for fancy olives.  There are no fancy violet olives in Hillsboro, Texas at the Walmart.  Scratch the olives.  The recipe calls for the chicken to be cooked for something crazy like 2.5 hours…in Texas…in August.  That is just not happening here and so I did what any self respecting cook who has already (officially) been working on this meal for three weeks – I pulled out my Instant Pot and modified the heck out of the recipe.  Here is what I came up with and y’all, it was delicious.

Moroccan Chicken without Olives but with Preserved Lemons

Squeeze the fresh lemon onto the chicken and season with the sea salt.  Lightly grill (don’t cook all the way…just for color).  In your Instant pot, saute the preserved lemon and onion in the olive oil.  Add all spices to include the cilantro.  Saute until butter is melted.  Add the water to the sauce.  Place chicken breast halves into the sauce and coat each piece.  Cook on high for 12 minutes.  Serve over couscous and with warm naan.

(*see the blog post about making bread for a short cut to delicious homemade naan!)