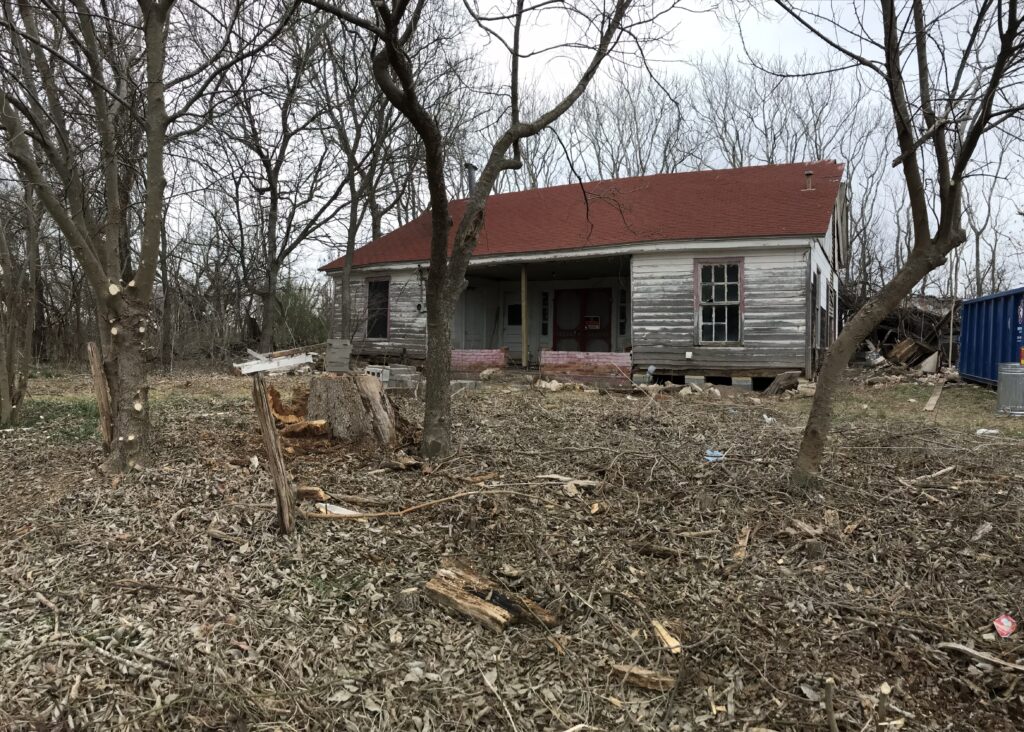 You Don’t Always Get What You Pay For…

After we emptied the house, we turned our attention toward foundation and structural issues.  Raising and leveling the house prior to starting the renovation process was very important.  Once these were accomplished, we would be able to repair or replace any problematic floor joists and run the minimal plumbing we wanted to install.  Getting the right also meant that the house would be more square, facilitating window and door installation, siding installation and a myriad of other tasks ahead.

There were two outfits that did house leveling in our area.  One group did enough jobs to live for a few months and would drink beer until they needed more money.  At that point, they would reenter the workforce.  We needed them during their hiatus and so that left us with the other group.

The boss showed up to look at the job and give us an estimate.  I don’t think he ever grasped the fact that this house was fragile.  They treated it rather carelessly, I thought. His estimate was way off and the project dragged on and on, increasing cost and frustration levels.

Our house leveling work would cost us $800 a day for a three-man crew.  The boss man had hurt his back.  While he counted as one of the crew, he couldn’t do anything except sit in his truck and talk on his phone.  A presumed bonus to him was the opportunity to consume what we believe to be adult beverages all afternoon.  We suffered though his increased level of cognitive dysfunction on display as the afternoon progressed.  We just needed someone to focus on raising and leveling the house, not sit around all day.

Why Did It Have to Be Snakes? 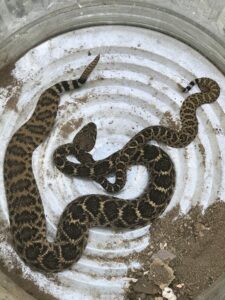 His crew was an interesting bunch.  The hardest worker and the one who seemed to know what he was doing, had been in jail the month before.  Lucky for us, he got out in time to come work on our house.    He was polite and easy to work with.  He seemed to know a lot about raising and leveling an old house.

His sidekick was late for work most days.  Some days, he had to be called and reminded that he had a job to come to.  When rattlesnakes were found under the house, he captured them and took them home with him.  His plan was to keep them in a terrarium in his living room.  This guy spent the bulk of his time rummaging through the shed out back instead of working on raising and leveling the house.  Winner. 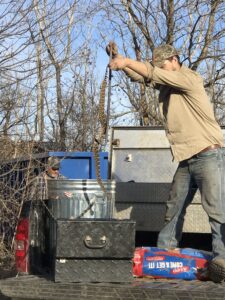 We found the first rattlesnake in January under the fireplace on the north side of the house.  The leveling crew found three more snakes and captured the ones in the photo.  One of the guys (the one who actually worked) saw one under the house.  He saw it and screamed and then got stuck trying to get out from under the house.

He said that the snake (a rattlesnake, of course) was as big around as an orange and at least six feet long.  Oh, and it slithered under the concrete slab that had been poured as a front porch during one of the few renovations to the house.  Evidently, the dirt under this huge slab of concrete had eroded and was now serving as a snake den.

This bit of information prompted Jerry and to make plans to divest ourselves of said concrete pad in the very near future.  We live in Texas and I am on Facebook.  At certain times of the year (read spring), my feed is filled with snake identification guides, pictures of friends and friends of friends who have encountered snakes, and also with videos of snake hunters cleaning out snake dens.  If you have never seen this, I encourage you to view this video and article.  This is what we thought we were facing and goes a long way to explaining our reaction.  This led to the GREAT RATTLESNAKE ROUNDUP OF 2018.

I was determined that the snakes must go.  A friend of ours a little west of here, had already sent me text messages about the rattlesnake den they removed next to their property.  40 plus snakes of all sizes under a canoe and woodpile.  Another friend, much closer geographically, found a huge den.  They removed one snake, but the rest are all just hanging out and reproducing.

I understand that there are good snakes and dangerous snakes (not bad…I get it), but we had men working in tight places and had children on the property.  The snakes couldn’t remain.

Round and Round We Went 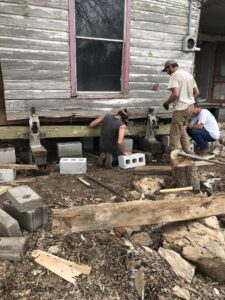 The house raising crew didn’t have sophisticated equipment.  I have seen some outfits that have hydraulic jacks attached to a computer and, after positioning them under the house, push a button and the entire house raises however much was needed.

That was not the plan for our house.  Our crew had a railroad jack that was positioned to hold up the front porch roof and then a couple of small bottle jacks that they used to raise one section of the house a couple of inches.  They would insert wooden boards and shims to support the height gained and then do this again and again, working their way slowly around the house.  Very low tech and, I think, a method that put a lot of strain on the house.

Out of Time and Patience

After a week of raising the house by inches in a circular fashion, Jerry once again asked how much longer this was going to take.  Boss man couldn’t or wouldn’t let us know.  They didn’t have any jobs lined up after ours and so they had decided to milk us for as long as we would pay them.  That didn’t last as long as they had hoped I expect because a series of mistakes soon let us know that we would be better off doing the work ourselves.

The first “holy smokes” moment was when they insisted that we needed to replace a rotten sill log.  I wanted to keep the house as original as possible, but if it was rotten, the beam had to go.  They jacked up the house on that side and dropped the 173-year-old beam out.  It was replaced with a constructed beam only for us to be told that there wasn’t anything wrong with the original beam.  Ugh. 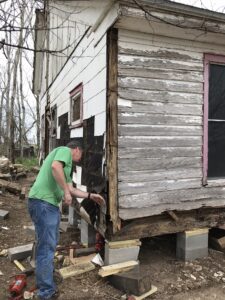 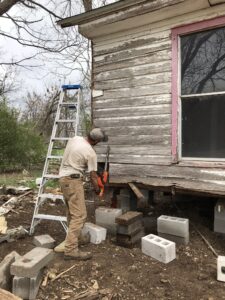 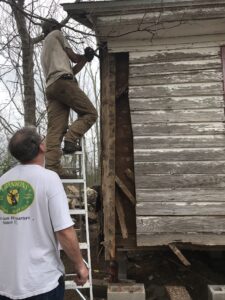 They next decided that the reason a wall wouldn’t raise was because the 4”x 4” corner post was rotten and collapsing under the increased weight.  This was accurate.  Replacing the post needed to happen.  A chainsaw applied carelessly to the front of the house and trashing the original clapboard was not part of any plan I approved.

Jerry and I were afraid every day when we came around the corner that the house would have collapsed overnight.  It was that bad.  Jerry and I soon realized that we needed to just do it ourselves and so we went to Lowe’s and bought two hydraulic bottle jacks, some shims and concrete pads and blocks.  We finished the job ourselves, but it was the first of many projects where I was certain we were in over our heads, but that if it was to get done, we would be the ones doing it.