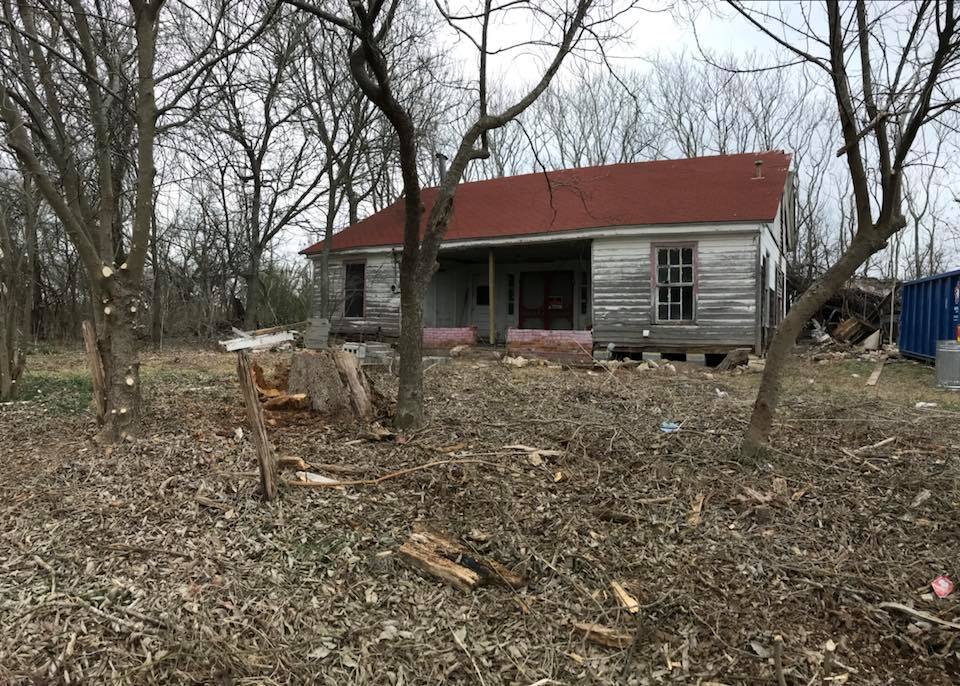 The Art of Addition

Common thought among the experts in home renovation is that if you are putting an addition onto an old house, you need to make the addition appear that it had always been there.  Some old houses are boxy and asymmetrical by nature. An addition didn’t significantly alter the look of the house.  Houses with non-rectangular floor plan have room for an addition to be added without the house being changed into something it wasn’t.  Our plan for an addition need to add space while maintaining the original house.

Ours was a very simple dog trot cabin.  Period.  They only really have one variety.  Pens divided with a center breezeway.  Some have two pens on each side of the breezeway, some have one.  Some have a porch across the entire front and/or back.  Others have a small porch on the front and/or back of the house.  They are all symmetrical and very rectangular.  This is just the way they are and any deviation from this lay-out is noticeable.  I didn’t want noticeable. I wanted a plan for an addition that both added space and enhanced the original homestead.

In addition, I wanted a functioning house.  When we bought the old Texas Homestead, we knew that it was going to need significant renovations as well as an addition. What that addition would look like was a sticking point.  We wanted the old house to be the main focus, but at 1,100 square feet, it was shaping up to be a very small main focus.  Ours was a four-room dog trot cabin with a small, inset porch on the front.  (*see drawing below) 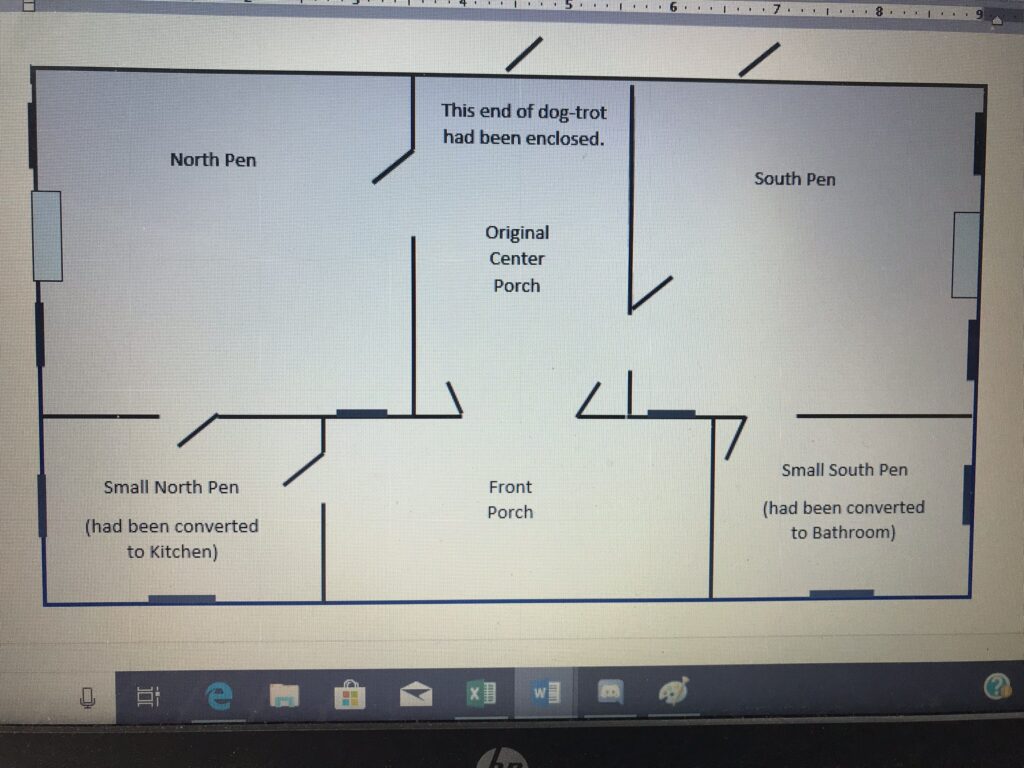 NOTE: Yes, it is a screen shot.  Ugh…  I wanted to show you the layout of the old house and I can’t come up with something better.  This took an hour.  Okay…back to the post.

Originally, the front porch and the center hallway were both open air.  There was no wall on the east (top) of the house.  I don’t know about the double doors between the front porch and the center hallway.  Seems silly to have doors on the breezeway, however these double doors match the other doors in the house, except for the door on the east side of the breezeway.  We think that the additions may have been done at different times.

Jerry and I were in complete agreement.  The house was what we wanted everyone to notice.  When people drove by or pulled up to visit, we wanted them to be able to see the house and easily imagine what it originally looked like.  We didn’t want the addition to look like a weird growth on the house and we didn’t want to have to stand in the yard for 30 minutes explaining what the original house looked like.  The house was important and it just needed to be out in front, in all its original glory. 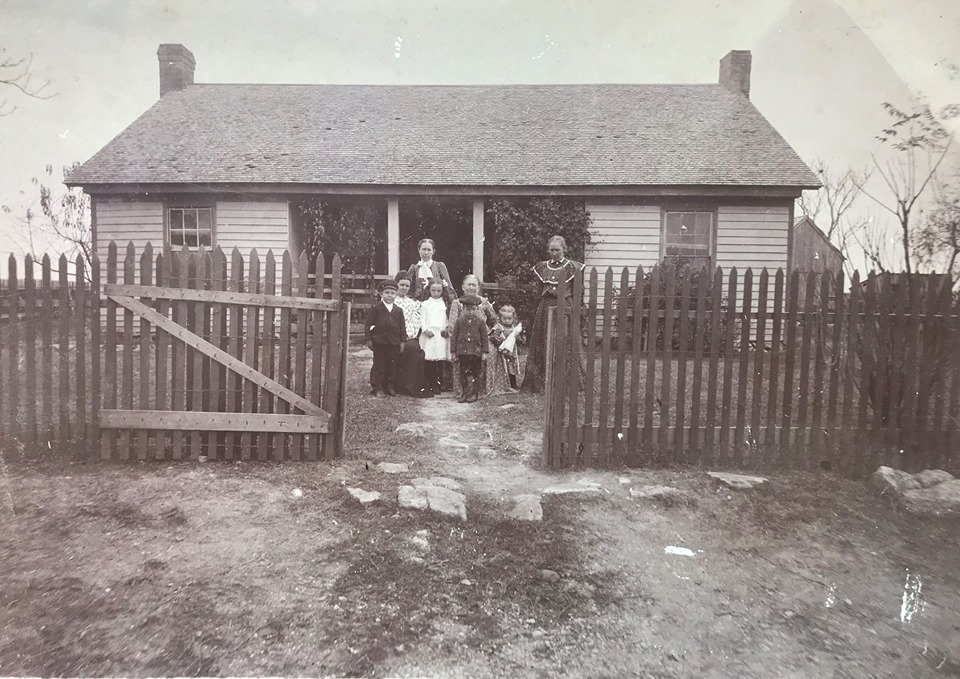 We decided that building an entirely separate house, attached to the old house, was our solution especially if that addition looked like we had replaced the barn in the back yard…you know a structure that had always been there.

We know there were several barn structures behind the house even prior to 1852 when James and Isabella Wood bought it.  (*see photo above.  The barns are on the right hand side of the photo.)  A.Y. Kirkpatrick discusses in his book Early Settlers’ Lives in Texas that E.S Wyman had barns behind his house and that the future first sheriff of Hill County, Charles Smith Davis, resided in one of them since housing was so scarce.  That little tidbit of information became the inspiration for our addition solution.  We would build a structure behind the old house that looked like a barn and would connect via an addition built across the entire length of the old house.

I wanted to have the addition on the north side of the house so that we could be shielded from the north winds in the winter.  We flipped what had originally been to make it convenient for us.  Please forgive me.  This little switch-a-roo resulted in a cute little courtyard backyard area.  (Well…cute to me.  It is an absolute wreck as I type this.) 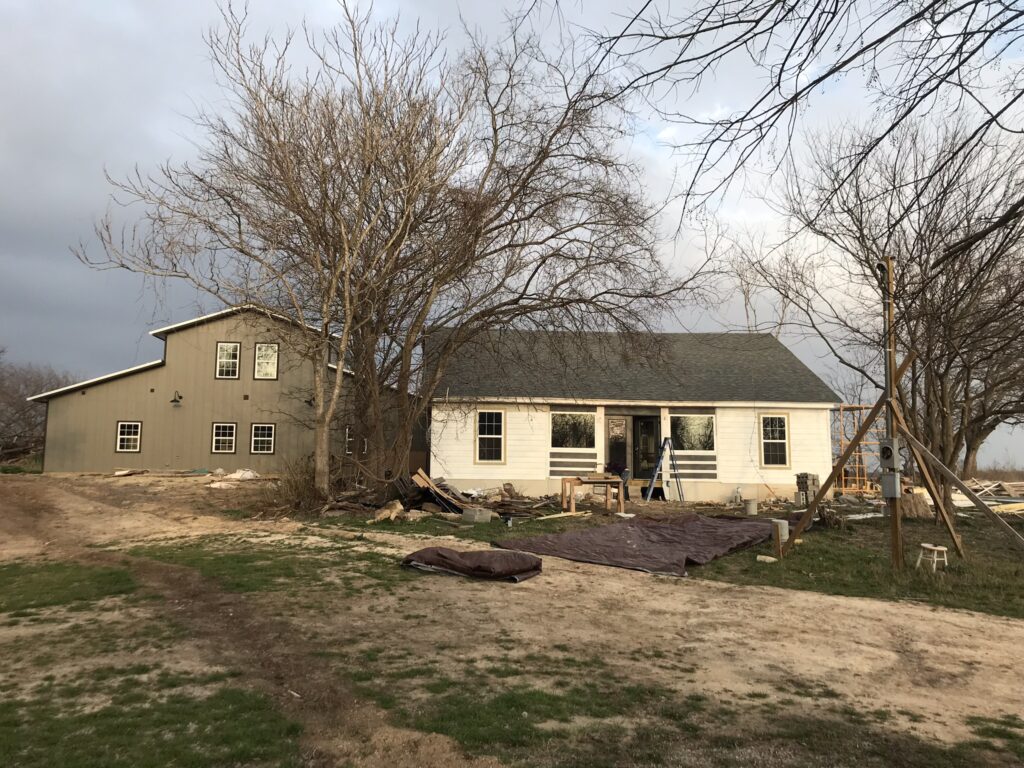 As you can see, the 1846 Texas Homestead glows in front and isn’t overshadowed (much) by the barn-like addition even though the barn is significantly taller.  This plan gave us an addition with more than enough space that also complimented the original structure.  The white paint on the old house helps it to pop and glow out in front.  We selected the gray color on the barn by grabbing a handful of likely shades of gray and comparing them to the old church on FM 308 in Milford, Texas.  Thunderclap is the name of the color if anyone is shopping for it at Lowe’s.