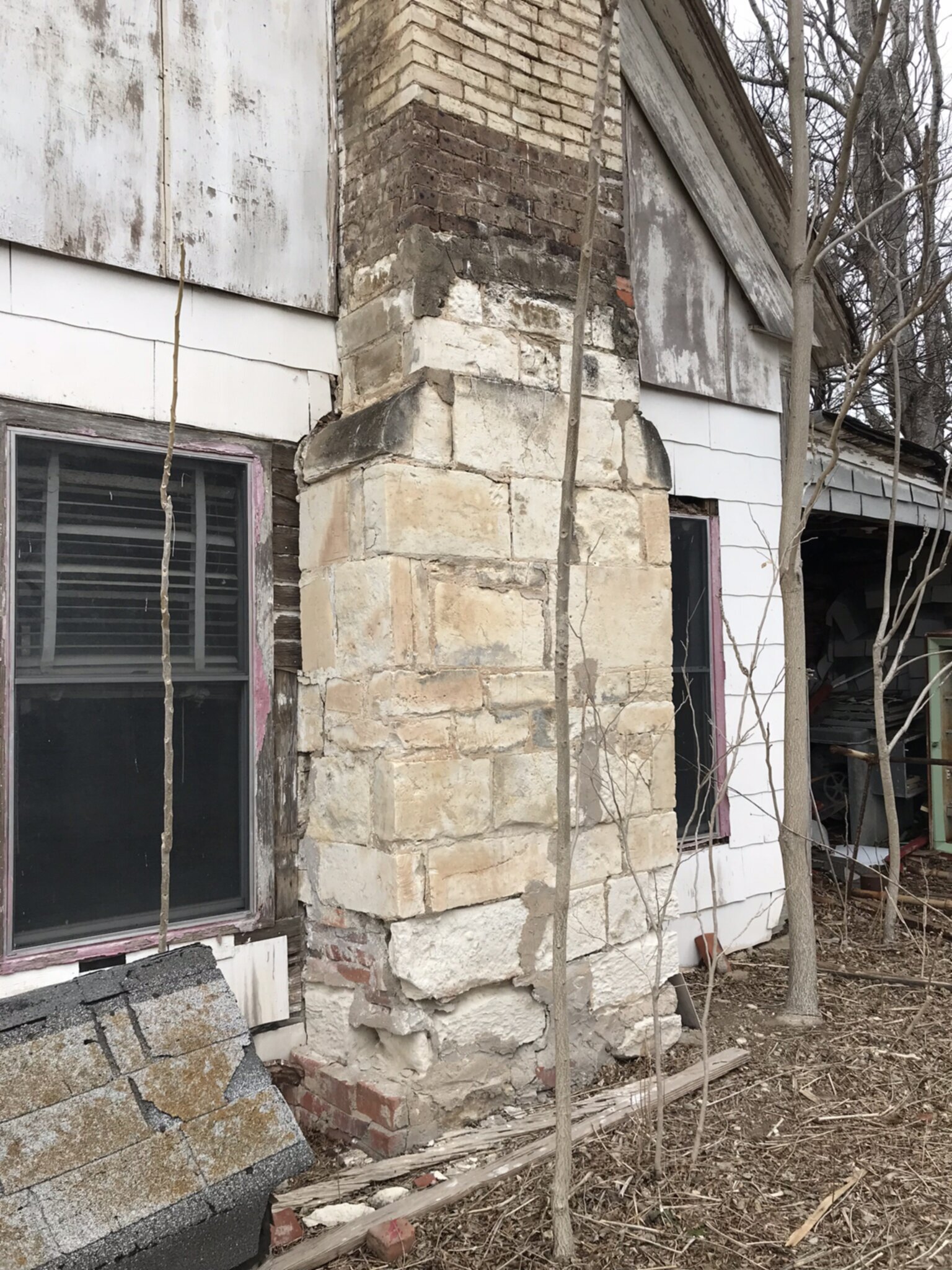 Removing the chimneys was something that I dreaded on a couple of levels.  The thought of dismantling something original to the house made me sad.  The thought of the amount of labor required made me tired.  Jerry and I watch Stone House Revival and those guys have cool power tools and big muscles.  How on earth would we be able to do this?

The house had fireplaces in the two large pens on the north and south sides of the house.  They were in bad shape, but they were the original fireplaces and chimneys and, of course I wanted to keep them.  But, it became very obvious, very quickly, that we would need to remove the chimneys one stone at a time.

Too Late to Save Them 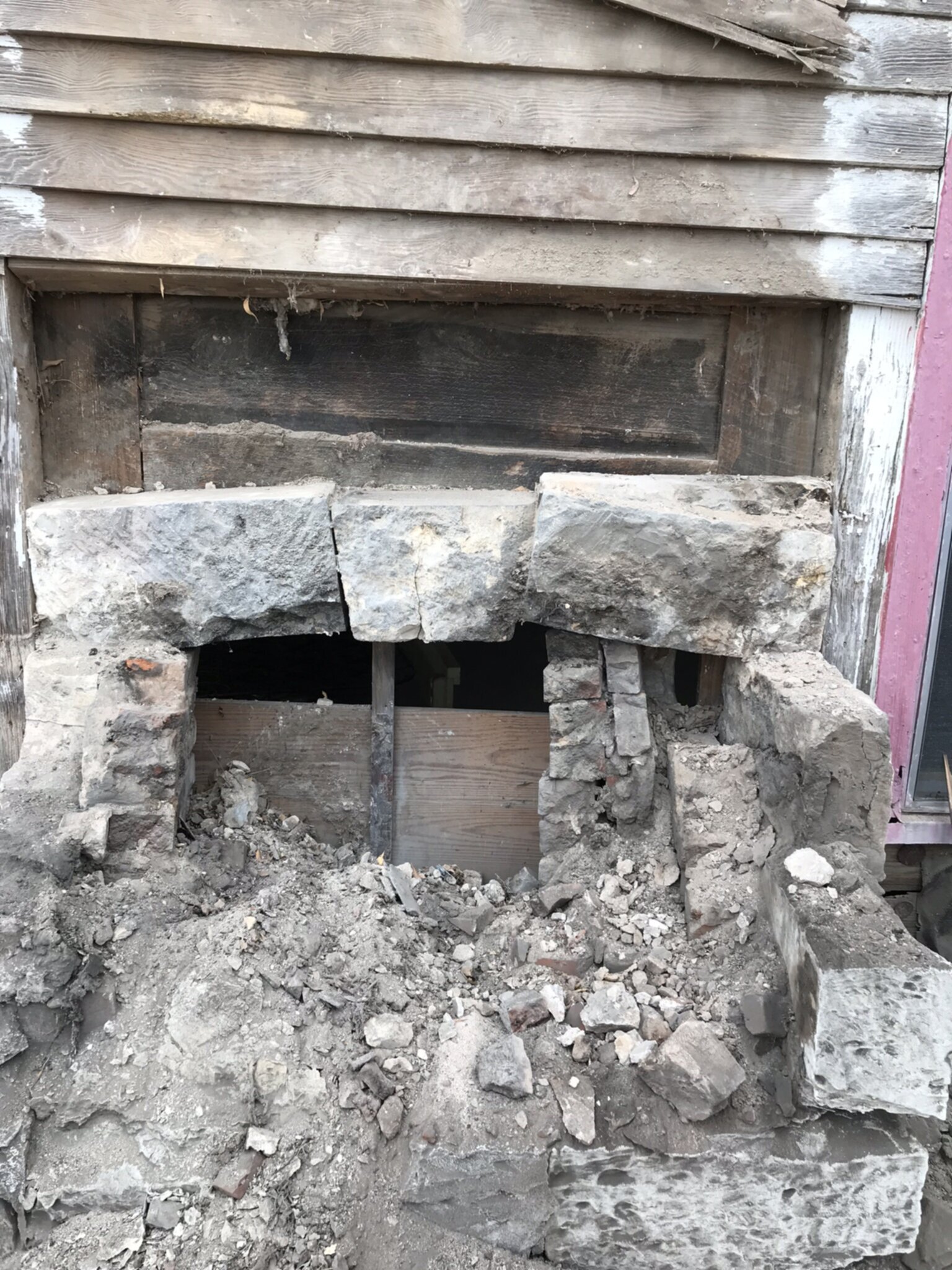 You can see above that the fireplaces had been partially filled in already.  The limestone blocks were crumbling long before we arrived.  If the house was going to be raised and any attempt made to level the house, the chimneys had to come down.  And so we rented scaffolding and got to work. 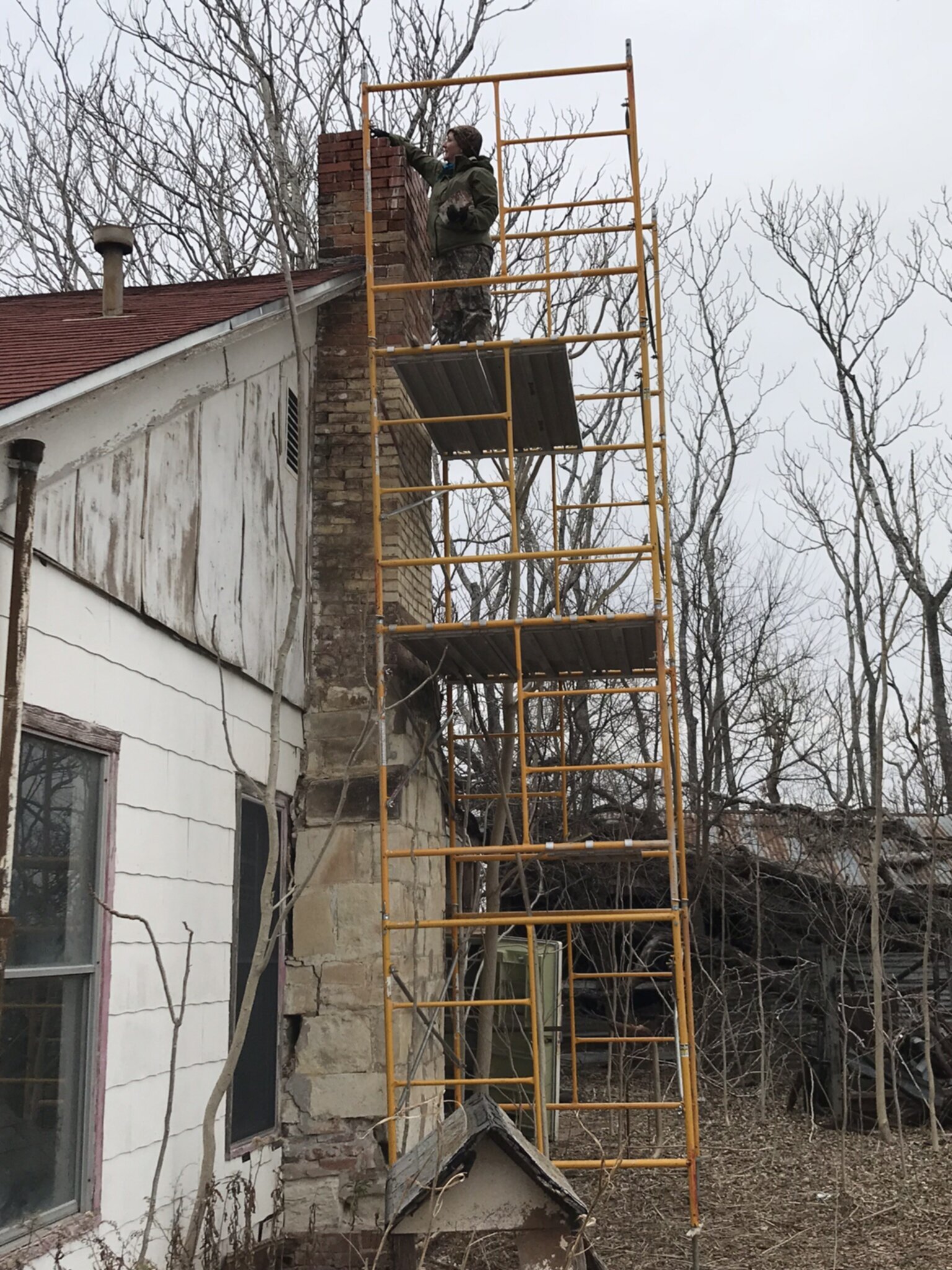 Start At The Top

My sweet friend Margaret called me when she saw pictures of us taking down the chimneys.  She wanted to know how we knew how to do it.  I told her we thought of it as a really big game of Jenga.  You start at the top and work your way down very carefully.  The bricks came free with a couple of taps.  The limestone blocks were a bit trickier.  Still, we knew to focus on removing the chimneys one stone at a time, and just go slowly so we didn’t damage either the stones or ourselves. 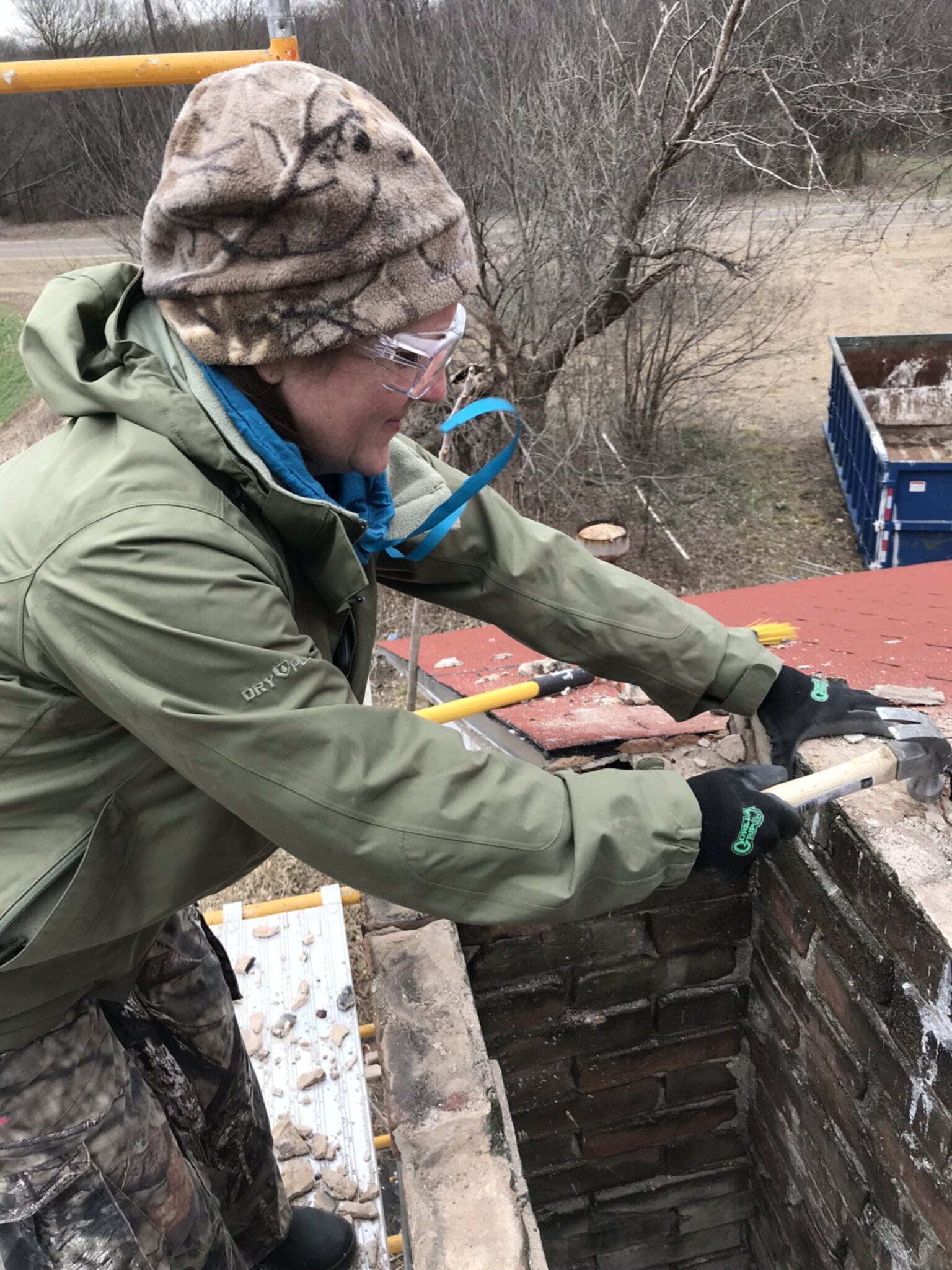 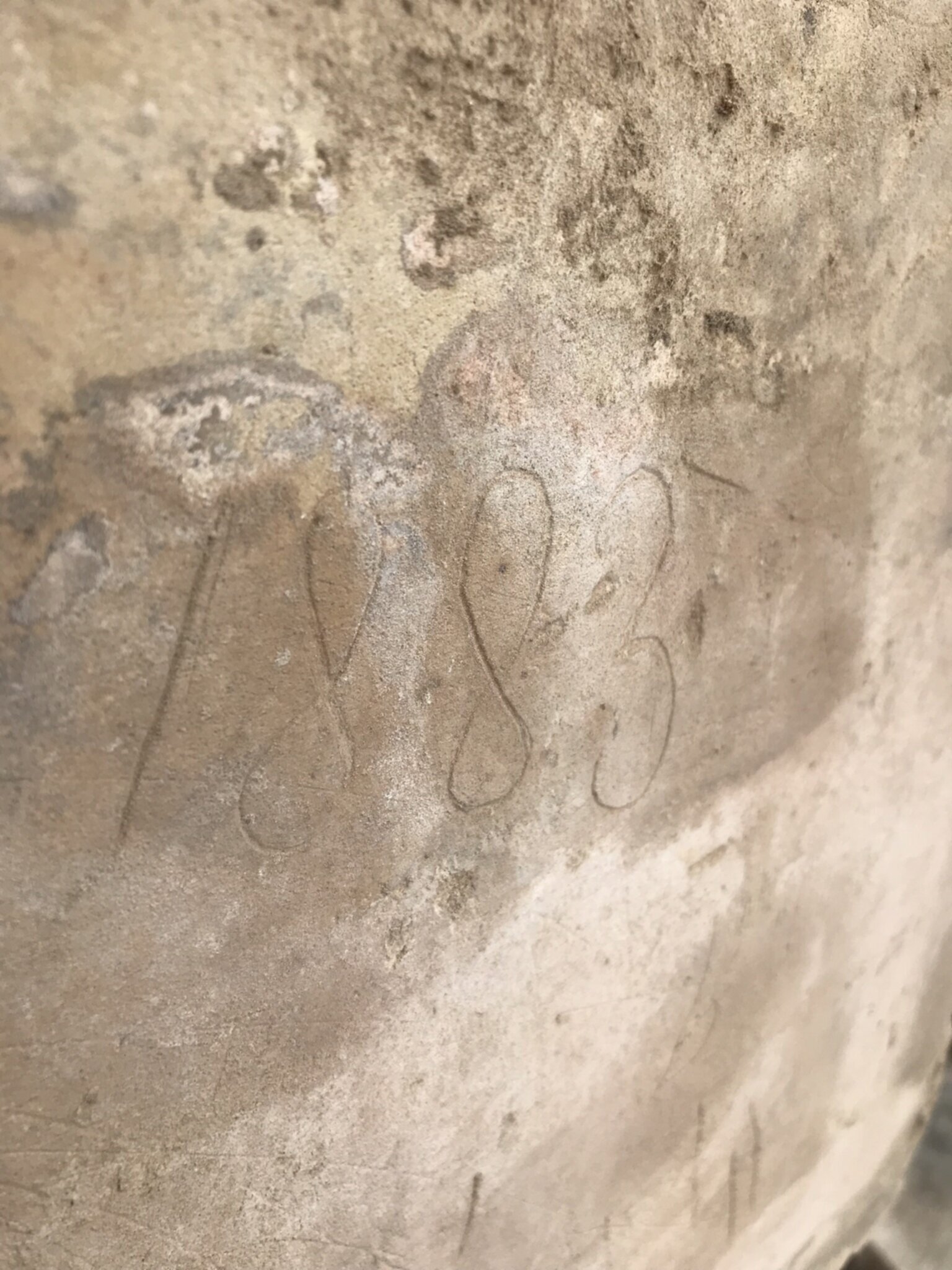 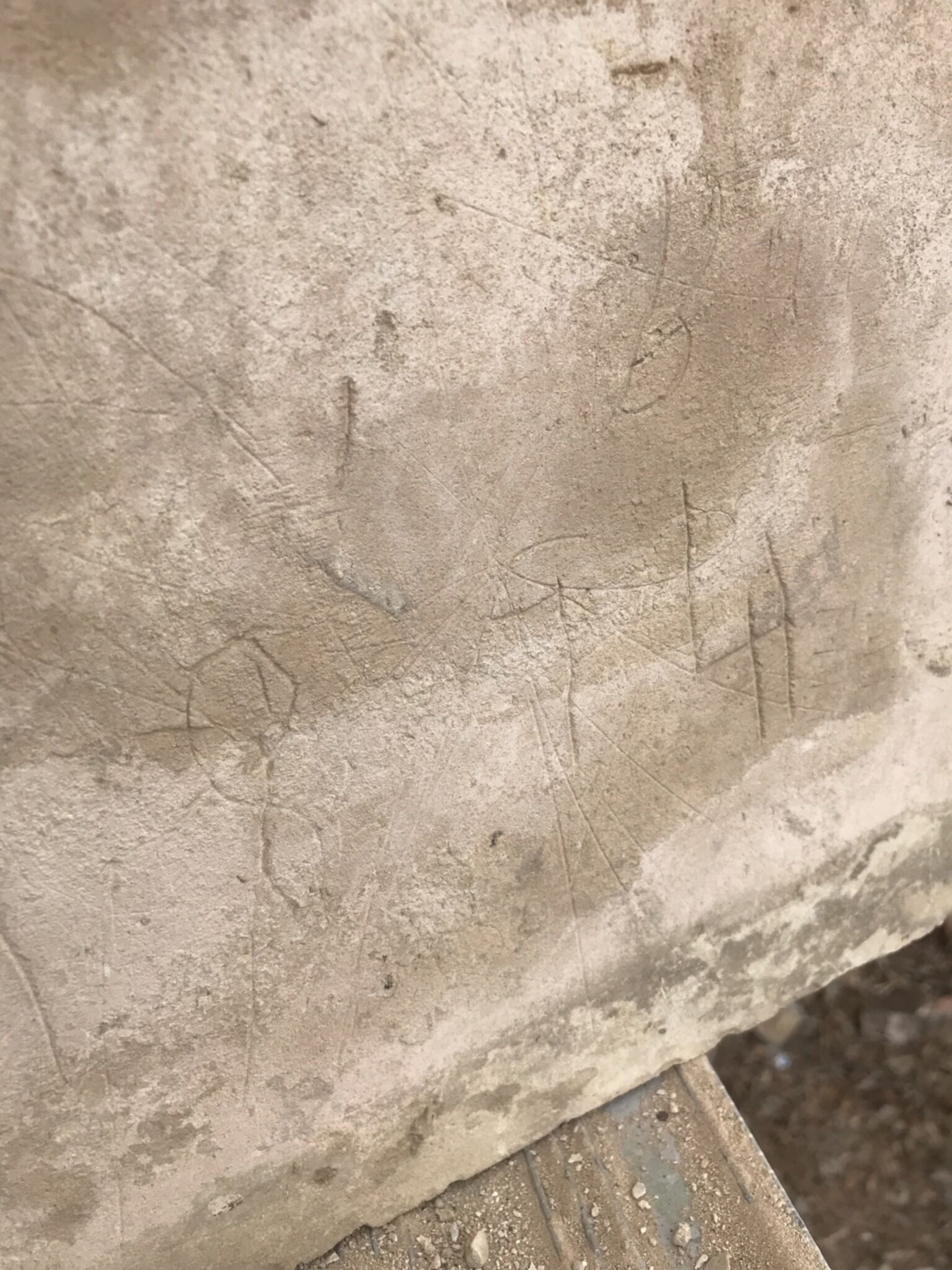 Some stones were small or medium sized and could be handed down.  Others were massive and too much for Jerry and I to manage safely.  Our solution was to use some of the scaffold decking as ramps in order to slide the stones down.  Poor Jerry had to manhandle those once they were on the ground, but he was a great sport. 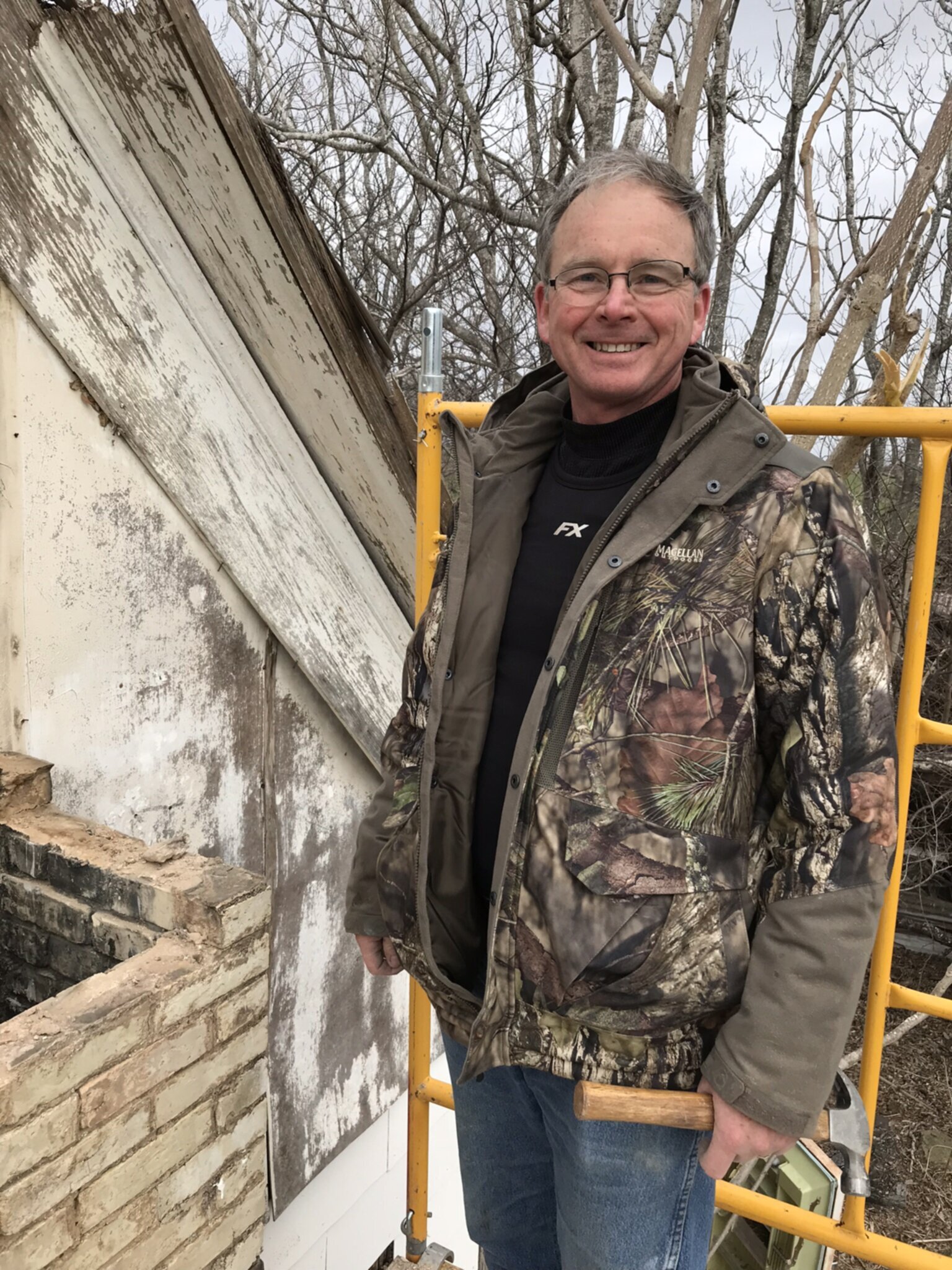 Excitement on the North Side

This was a two day project.  Day one, was the south chimney.  Day two was the north chimney.  You would think that since we were now experts there wouldn’t be any excitement.  That is not how it worked out.

First of all, we found boards behind the north chimney where the squirrels had gnawed themselves an entrance hole.  Then we found a dead squirrel in the wall.  And then it moved.  Yikes.  With all the banging, that squirrel was agitated and I wanted it gone.  I tossed (forcefully, maybe) a stone at the boards hoping that would encourage it to leave.  It worked.  The squirrel launched at my head and before I could process what was happening, my arm flew in front of my face and diverted the flying squirrel to the ground.  Jerry sat beside me dumbfounded at what had just transpired in the span of two seconds.

The next excitement happened when we reached the bottom of the chimney.  Under each chimney were huge flat foundation stones.  Jerry was attempting remove one of them and, sure enough in JANUARY, he found a diamondback rattlesnake under it.  Fortunately, it was cold and not moving nearly as fast as my squirrel.  He bravely took care of it, but it would be the first of many we would find.