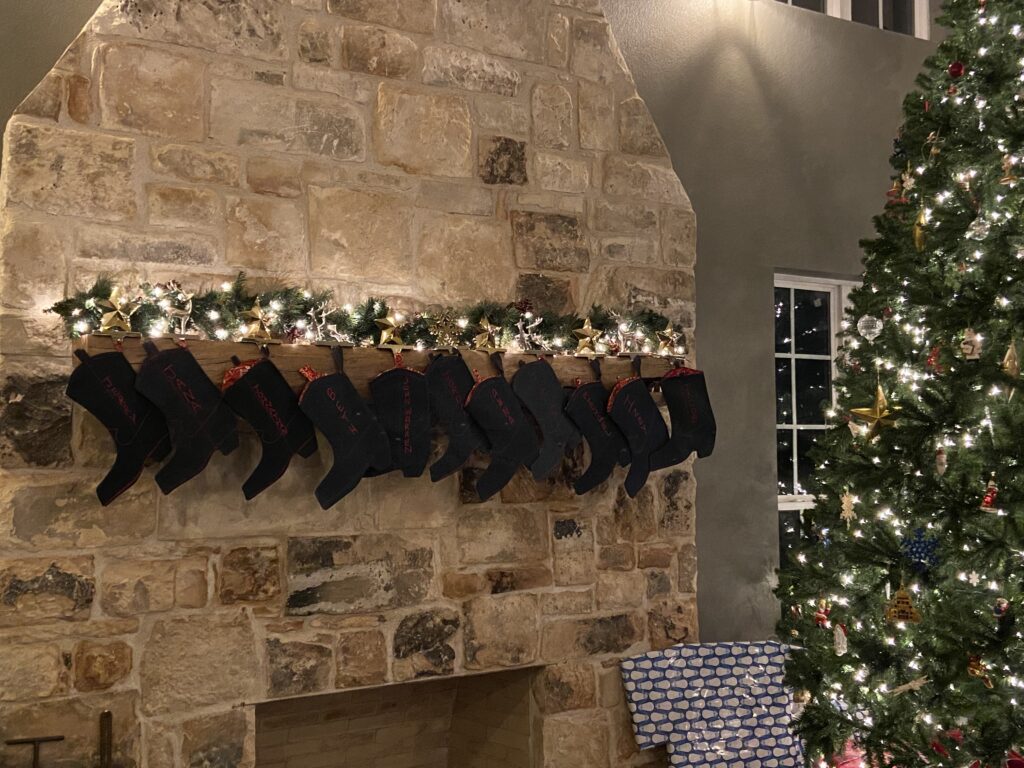 Good Things Come to Those Who Wait (or Procrastinate)

The fireplace in the addition was completed in January of 2019.  We thought that the fireplaces (we have three total) would be finished in late summer/early fall, but that didn’t happen.  The stone mason who we had spoken with had some health issues and some family issues as well (he worked with his brothers).  When it was all said and done, we had to call another stone mason and that pushed back the fireplace in the addition to a January project.  At that point, we were busy finishing up all sort of little tasks and then moving in.  The mantle was not a priority. 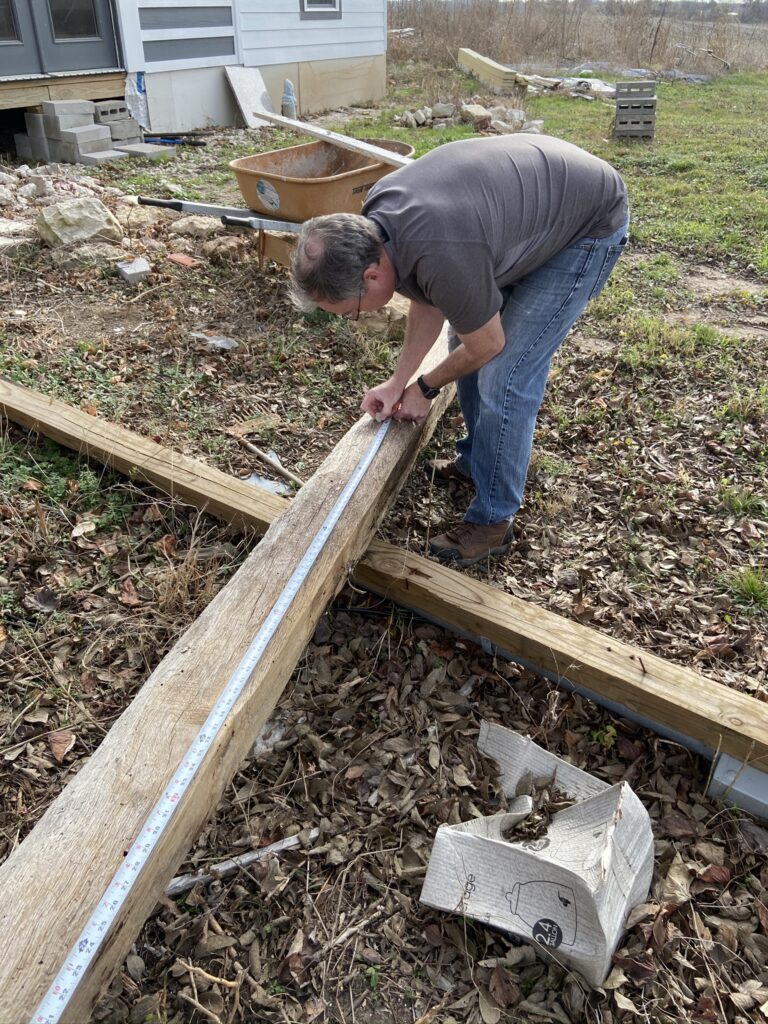 We had an idea, of course.  The incompetent house levelers had determined that a huge sill log was rotten and had removed it from the old house only to tell us after the fact that it was sound and could have remained.  At that point, it was in the front yard where it would remain for over a year.  We pegged it for a possible mantle, but it had mortise and tenon joints on both ends.  One end needed to be cut off, but I was loathe to make that decision.  And so, the sill log weathered and gathered patina in the yard under the huge grape vine.

Waiting was all well and good, but it is December and Santa will soon arrive.  This year, both John Warren and Izzy will be here waiting on Kris Kringle to make his appearance.  I am still really new to this grandma gig, but even I know that Santa means stockings and stockings are hung by the chimney with care.  The mantle had to go up and go up ASAP.

I was ready to cut the sill long down to size.  We had done a survey on Facebook about how to approach it.  Most folks said to not cut it and let it over hang the span of the chimney.  That was my initial thought.  I mean, it kept me from committing to an irreversible decision, right?  In the end, Jerry and I came to a pretty cool compromise.  We trimmed the sill log to an appropriate size for the mantle and will use the remaining piece as the light fixture over our dining table.  It was a win/win.  I love a win/win situation.

Bois d’Arc Isn’t For the Faint of Heart 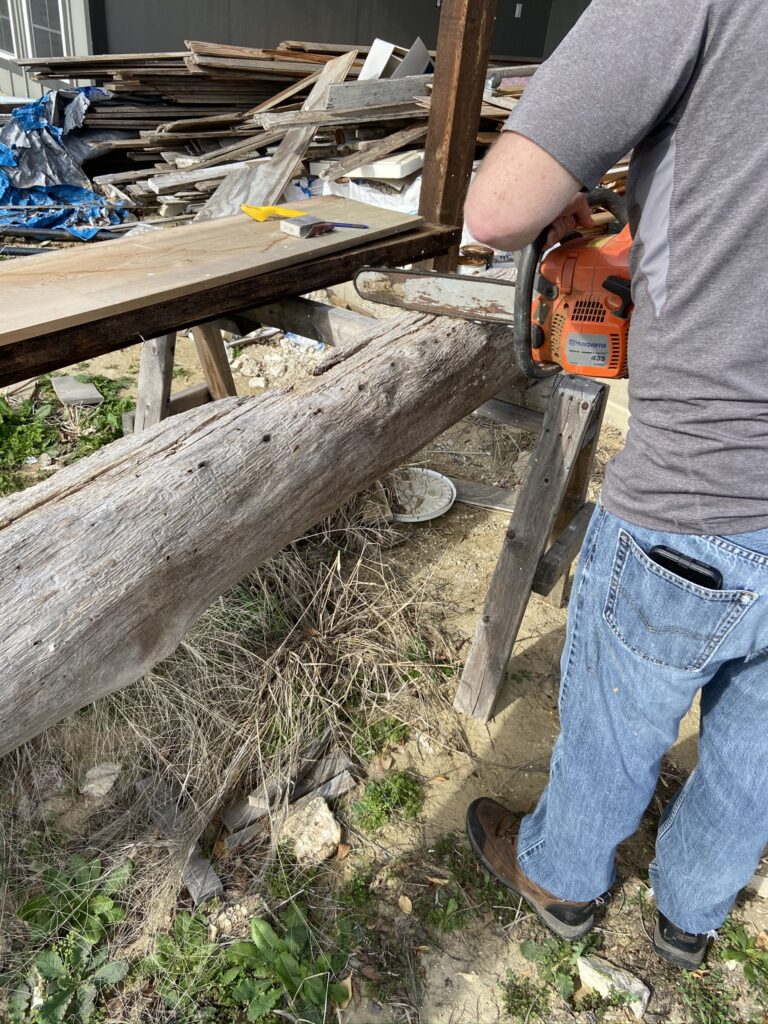 It is funny how things work out.  We have a huge Bois d’Arc tree in the burn pile.  It was dead and was pushed over to make way for the addition.  I suggested that we go and cut a slice out of it for the mantle.  Jerry was super un-enthused about that idea.  We had been told that Bois d’Arc would tear up a chain saw.  It would be impossible to cut.  Basically, it would be more trouble than it was worth.

Turns out, the compromise of making the remaining sill log piece into a light fixture for the dining room put the sill log back into play as the mantle.  Also as it turns out, the sill log is made of Bois d’Arc…like really old Bois d’Arc.  The cool thing about this type of wood is that, once upon a time, houses in Texas couldn’t be insured unless they had a Bois d’Arc foundation.  Bois d’Arc is super dense and hard.  It is also rot resistant as well as resistant to bugs.  It is sort of the perfect wood, but it isn’t easy to work with.

We decided that a 7′ mantle was perfect for the space.  That also left 5′ of sill log for the dining room light fixture.  Jerry cranked up the chain saw and got to work.  He cut the sill log to length.  We carried it into the house and lifted it into place on the corbels.  Problem.  The wires for the electric boxes showed and the mantle was really high.  We decided to notch the sill log so that it dropped about two and a half inches lower to both secure it on the stone corbels and to cover the electrical wires. 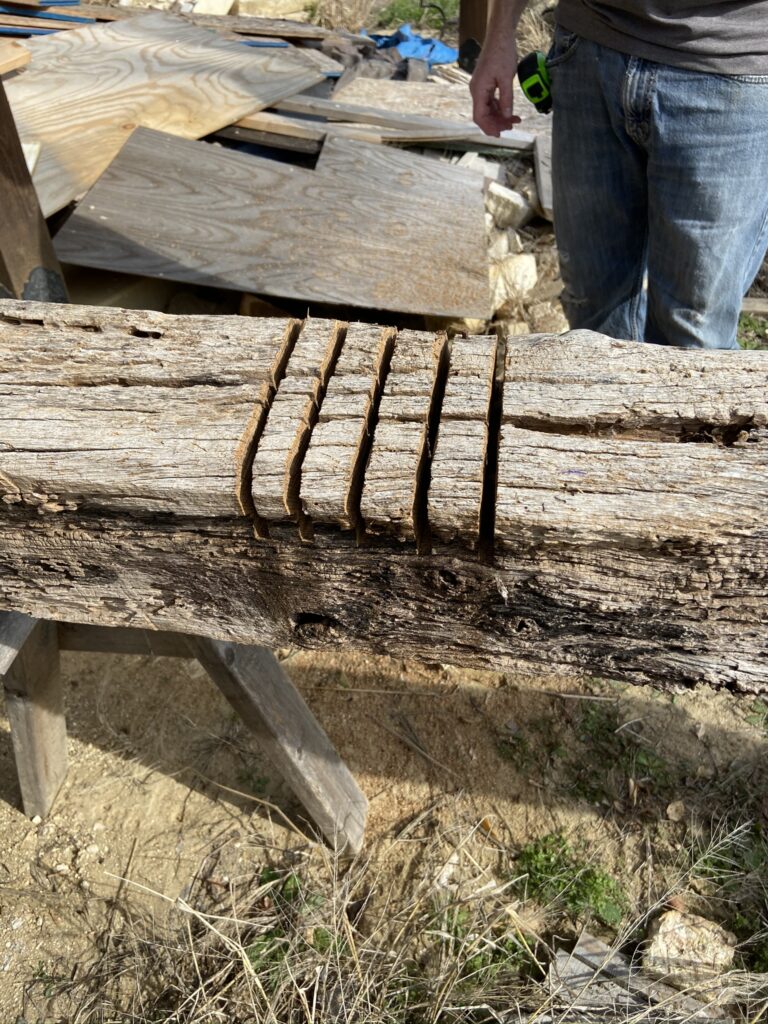 This meant that Jerry had to cut the notches into the sill log using the chain saw.  Once that was accomplished, I used a hammer and chisel to clear out the wood and form the notches.  Jerry cleaned it all up with the chain saw. 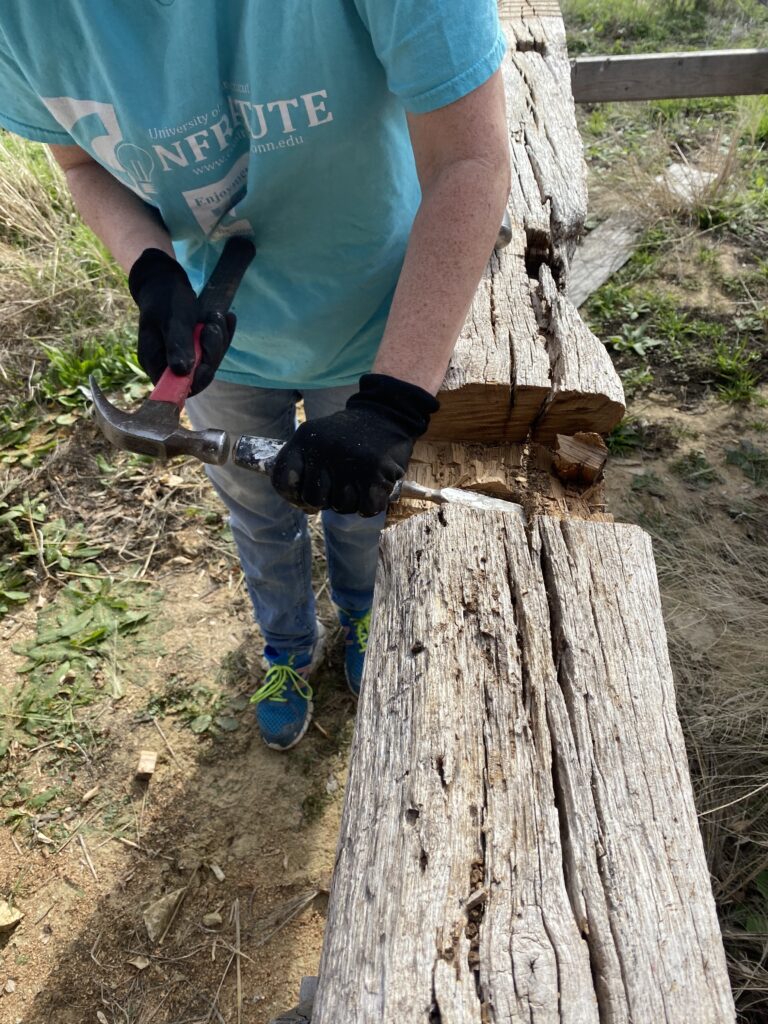 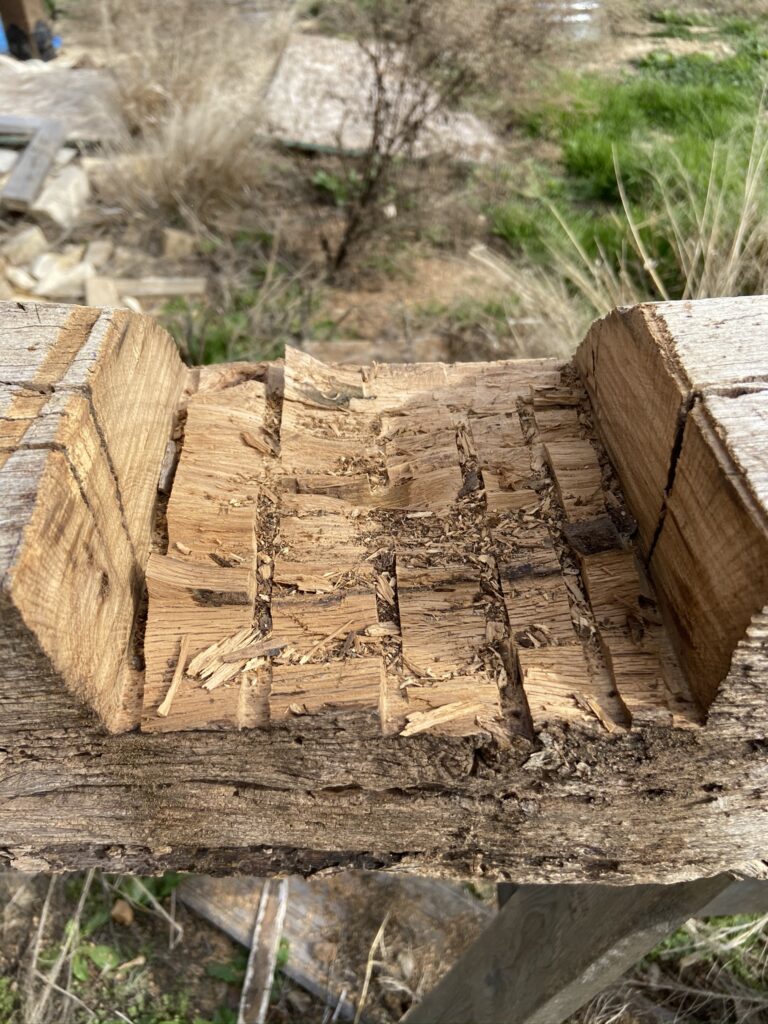 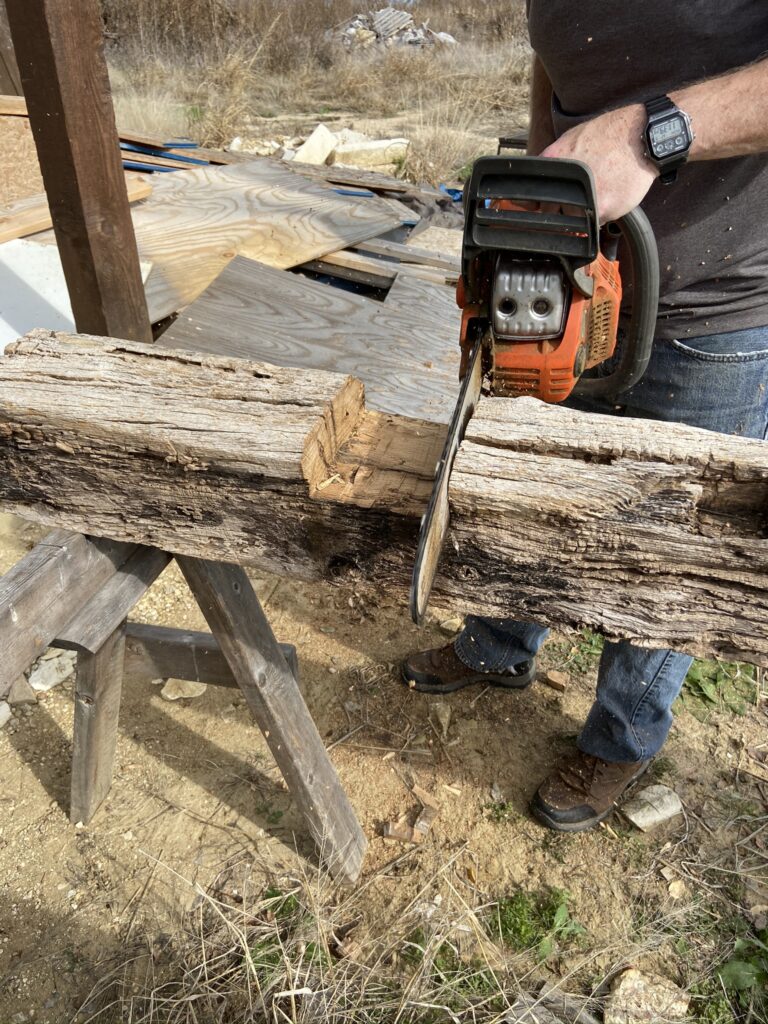 The chain saw was smoking.  No doubt about it, Bois d’Arc is a very hard wood and it is a bear to work with.   I felt like I was chiseling cement.  It was crazy.  I just kept thinking about what it was like to work with this type of wood with hand tools back in 1846 when the house was built. We love our power tools for sure.

I hit the sill log with a power sander to smooth it out a bit.  My sander was smoking as well!  After a couple of passes, we were pleased with how it looked.  We finished it off with a quick, clear coat of polyurethane to seal it up and keep it looking new. 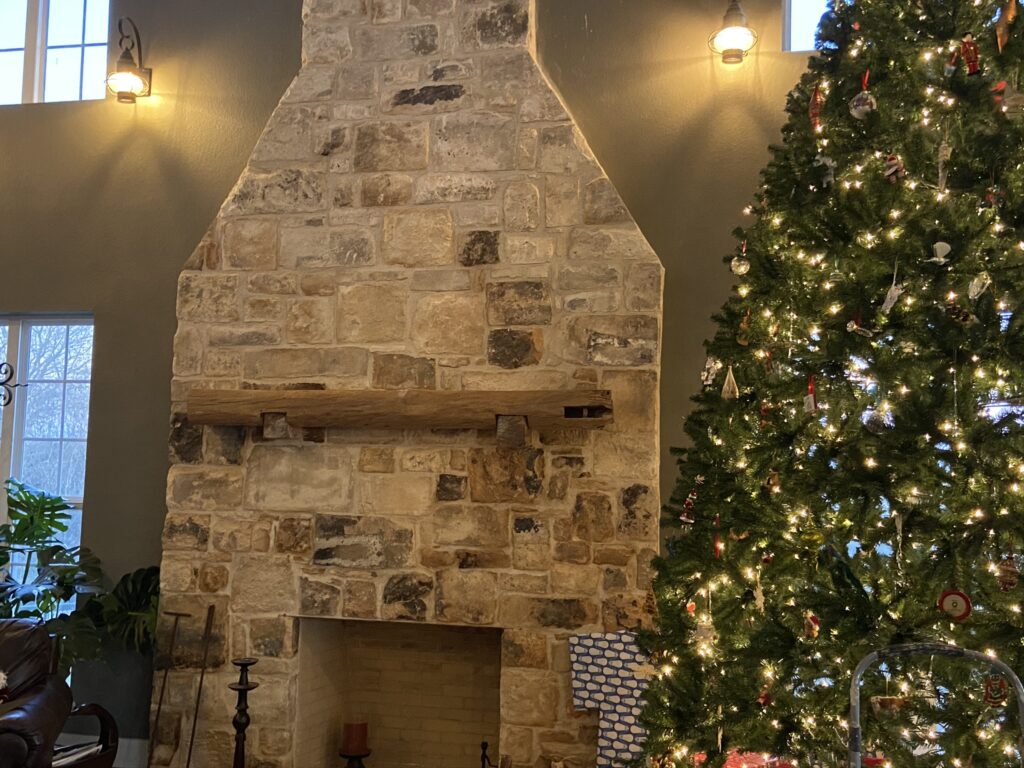 The finished project is a perfect addition to the overall look of the fireplace.  Remember that the stones on this fireplace are the stones from the original fireplaces.  It adds so much character to the room!  Jerry swears that we couldn’t have found a more perfect mantle for our fireplace if we had shopped for months for it.  I think it is funny that it was laying in our front yard since January of 2018.

I suppose I would also like to add that this is why there are piles of old wood still surrounding our house.  Even though we are living in the house, it is still very much a work in progress.  We had plans for each of those “piles”.  In fact, we are currently in the process of completing three more projects using recycled wood.  I’ll post about those when we finish them!