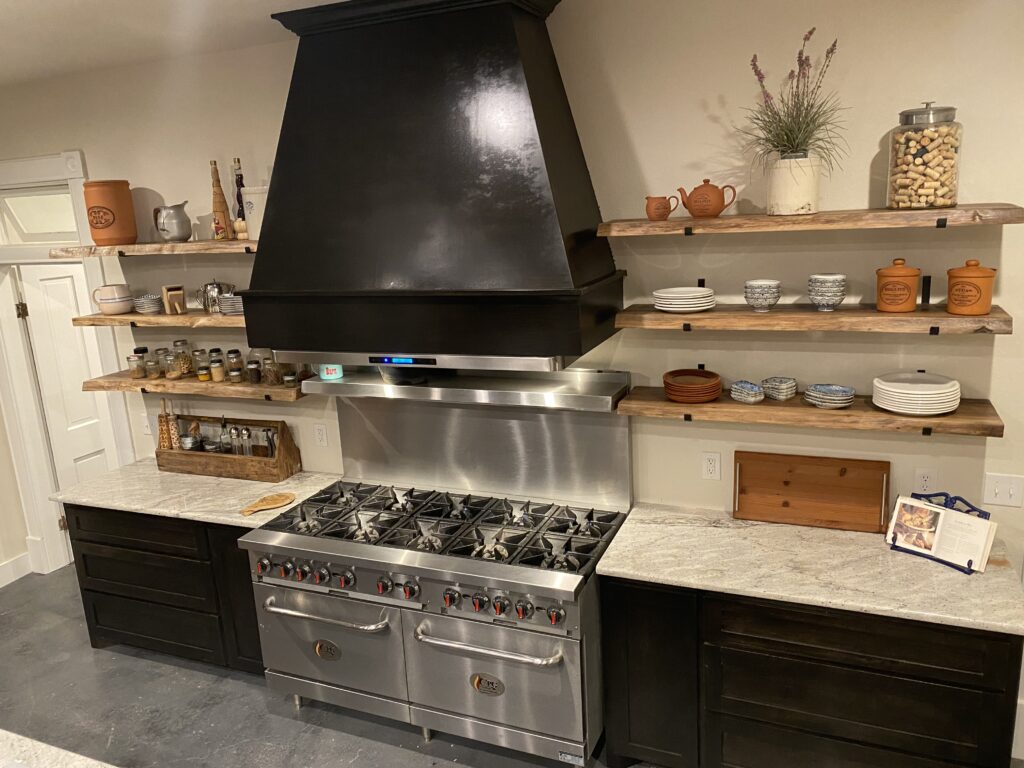 What do weather, history, and being a pack rat have in common?  Evidently, my kitchen.  It didn’t really start out that way.  I mean, when the tornado hit, my first thought wasn’t “kitchen shelves!”.  However, when you get lemons, you do better when you start at least thinking about making lemonade.  This week, we made lemonade from seven year old lemons.  Let me explain.  The lemons are really 2″ thick black walnut planks that we made into kitchen shelves after hauling the wood around for seven years.  Sometimes lemonade takes a while…

We designed the kitchen to have open shelving on either side of the range.  Ronny Smith made our cabinets and they are beautiful.  We stained part of them ebony and part of them golden oak.  We moved in and filled them up.  And then we started working on other things.  The shelves, which have always been part of the plan, were, well…shelved until we had some other projects managed.  The 2″ thick black walnut slabs were always our first choice for these kitchen shelves and when they could have been used for other projects, we firmly resolved to save them for the kitchen.

Back in 2012 (yeah, 2012), we were living in Virginia on a beautiful piece of property.  The property was part of Studley Plantation which was owned by John Henry.  It was here, on his father’s plantation, that Patrick Henry (“Give me liberty or give me death!”) was born in 1736.  In 2012, we had some really wacky weather which resulted in a tornado tearing through our property.  The tornado damaged our goat barn and the attached chicken coop.  It dropped limbs on our vineyard, breaking the guide wires. The tornado knocked out power for almost two weeks (which was a pain since we were on well and septic…bye bye running water and flushing toilets!).  It carried away the roof of our garage.  But the yuckiest part of it all were all of the downed trees and limbs.  They were everywhere.

The insurance adjuster arrived to find Jerry and I in the yard with a chainsaw attempting to deal with the mess.  He sat with us on the porch and told us to knock it off.  We had insurance and the insurance would cover the clean-up.  That was great news!  We were sweaty and hot and had no way to shower or cool off.  Sitting on the porch seemed like a better plan to me.

The Beginnings of Lemonade

We had done business with the folks at Eden Farms.  They have the friendliest chickens on the planet and they also made our enormous dining table.  We called them to see if they would want to do the tree removal.  They agreed and then suggested that they could bring their portable sawmill and fashion the downed timber into boards.  So, in the summer of 2012, we became the proud owners of 2″ thick planks of black walnut and white oak.  We have cherry, river birch and poplar as well, but those are projects for another blog post…

We Are Either Tenacious or Crazy…Maybe Both

We may be crazy.  There was over a ton of boards.  We know, because we loaded them all into a truck when we moved to Texas the following year.  And again when we moved from Stephenville to Midlothian in 2014.  And again when we moved back to Stephenville in 2015.  We loaded them into a UHaul when we moved into the rent house in 2017 while we were building our present house.  In 2018, we moved them to the homestead and placed them in the back yard under a tarp where they have aged for another year.  We kept those boards for a long time, confident that, eventually, we would be working on our forever home and that there would be a perfect place for this beautiful wood.  It took some time, but the time for the boards finally arrived. 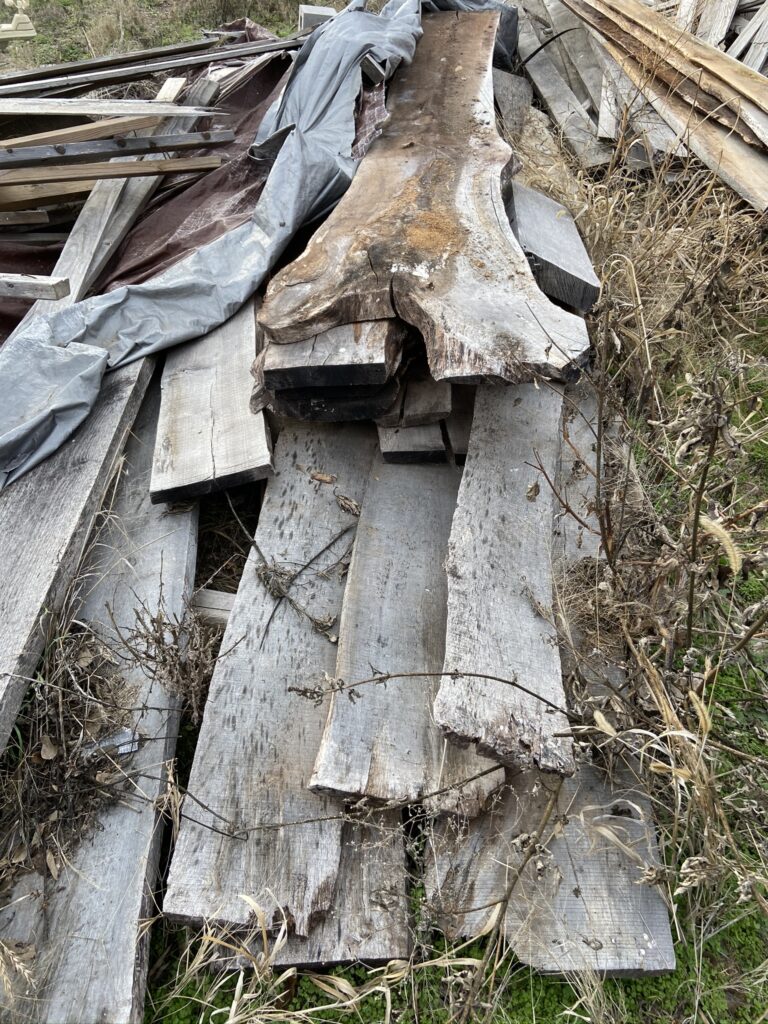 Let me tell you something.  It is a long way from a rough cut board to a shelf.  Miles of sandpaper stood between me and a shelf.  Our sanders have been used pretty hard over the last couple of years and the filter bag is missing from the sander that had the power I needed for the black walnut.  So I squinted a lot and generally just got filthy…again. 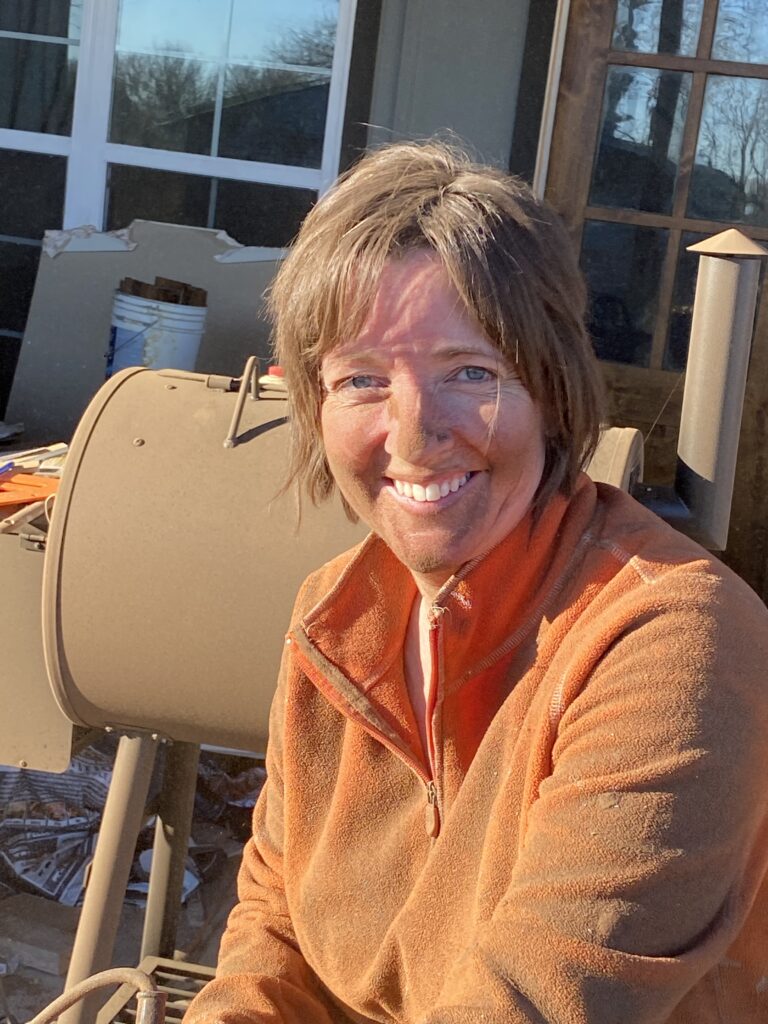 Y’all, renovation/construction/restoration isn’t for the faint of heart.  It is dirty work.  It can be really hard work, too.  But please, please, please know that it is some of the most satisfying and gratifying work I have ever done in my life.  I LOVE this…even when I am this dirty.  This isn’t everyone’s thing, but I hope that you all find your happy place and wallow around in it like a pig in mud.  It is sooooo good for your soul.

Back to the Shelves… 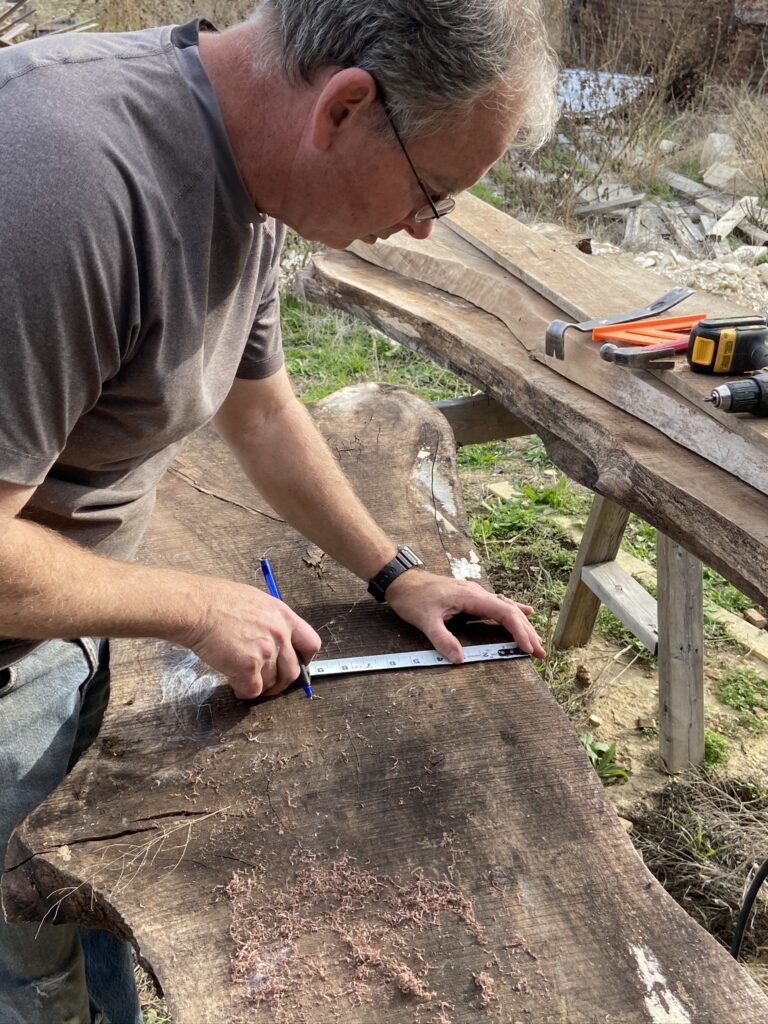 The wood we had was, basically, just slabs of trees with two live edges.  Do you have any idea how much fun it is to get a straight edge on a wonky board?  We marked it as best we could and got a straight edge that would fit against the wall.  The other, we wanted to be a live edge.  So, in addition to having a straight edge, we also needed to ensure that the board was no more than 12″ where the brackets would be.

This forced us inside to find where the studs were so we could determine where to place the brackets on the board.  This lead to another problem (see below).  We kept having to run from our outside project to the inside part so we could get it all correct.  Once the bracket spacing was set, Jerry measured from the live edge back 12″ in the two bracket locations and cut the board there.  This means that the shelves are a little more than, and sometimes a bit less than, 12″ at any given point.  They do, however, all fit flush against the wall and fit into the brackets.  We are very pleased.

Once the sanding was completed, we had to decide on the finish.  The cabinets and range hood in that area are stained ebony and are really dark.  We love contrast and decided that a couple of coats of polyurethane was the ticket for these black walnut kitchen shelves. 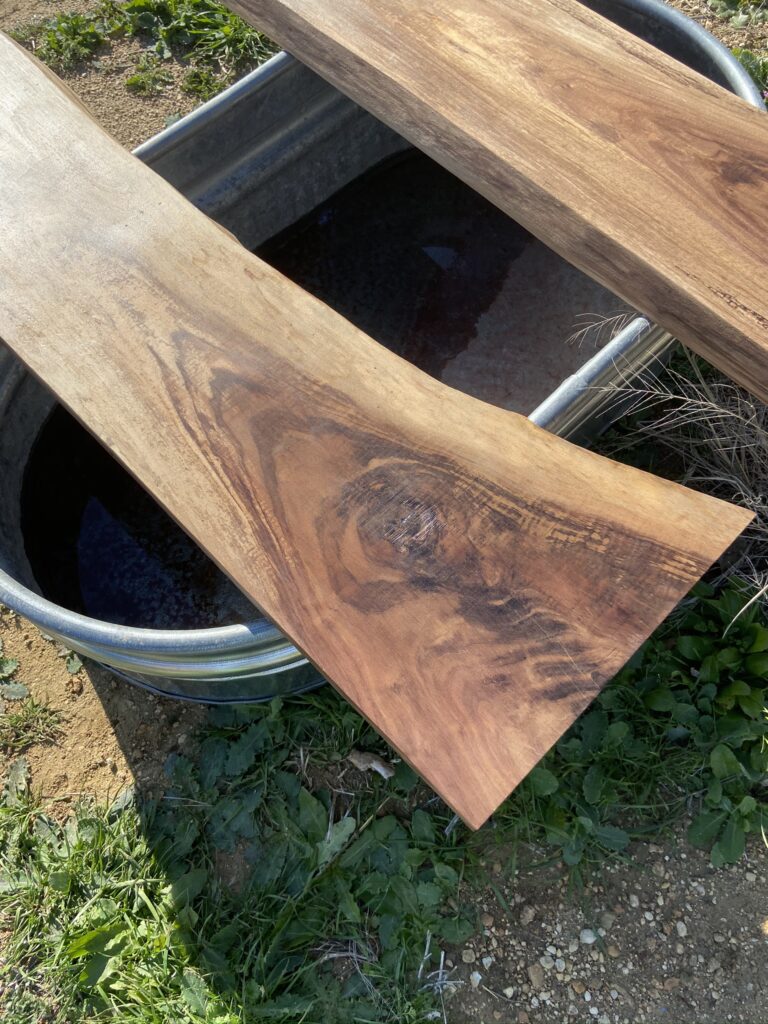 We ordered the brackets on Etsy a couple of months ago for our black walnut kitchen shelves.  They are a powder coated black iron bracket that just wraps around the front of the boards.  They were beefy enough to handle the 2″ thick shelf, but they were definitely going to need to be mounted into a stud in order to support the weight of both the shelf and the dishes I dreamed of stacking on them.

Ever ask yourself why things can’t be easy?  I mean, just for once, could all the measurements just be perfect?  Everything plumb and level?  It seems that for every project, there are “issues” to deal with.  The “issue of the day” for this project revolved around the studs.  The studs were not spaced the same on either side of the stove, which meant that the brackets couldn’t be in the same place.  This was in danger of really jacking with my OCD tendencies towards loving equal spacing.

What is a girl to do?  IF this had happened a year ago, I think I would have insisted that we figure out a way to make everything equal.  Maybe install a furring strip and attach the brackets to that.

But I have changed.  Maybe I am just tired.  Possibly, I have learned to compromise or accept that it is what it is.  Still… 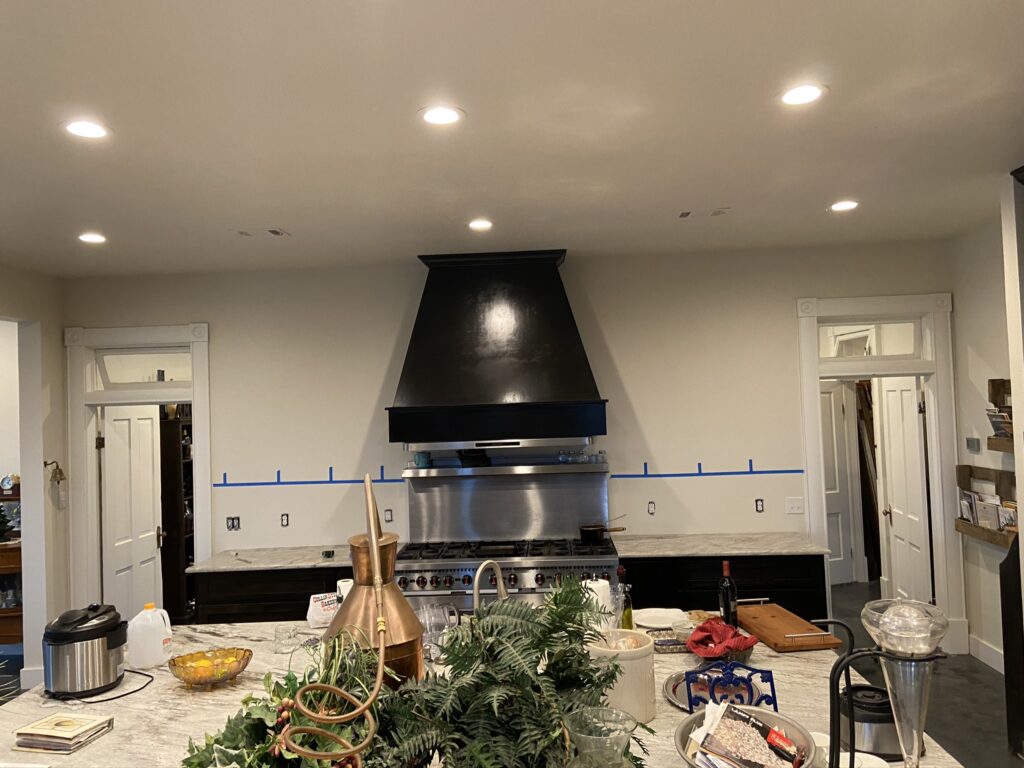 I’ve heard that visualization helps with stress and neuroses.  You imagine yourself in a calm, happy place and your stresses fade away.  My stresses involved very real and permanent iron brackets and slabs of black walnut.  They weren’t going away and the studs were never going to shift into alignment.  We pulled out the blue painter’s tape and marked the shelf heights and the studs and took a step back and decided what we could live with.  As you can see above, we had four studs on the left to choose from and only three on the right.  None were in the same place.  I think that there is about an inch and a half difference.  I can live with that.

I am still playing around with what stays on the shelves and what needs to go.  This is what I have so far.  Jerry loves the spice shelf so it won’t be changing.  I think there are too many items on the left and I need to thin it out a bit.