I don’t have a lot of information on family lines other than the Fergusons.  I have poked around and tried to see what I can find, but a great deal of my success depends on what their descendants have shared and whether or not they remained in the Hill County area.

If you have more information on the Frazier line, please, please please share it with me so that I can add to this line and make any corrections!  It is so important that we begin to collect and publish this information.  I wish I had done more while my grandmother was alive!  But…I can’t go back and change what I didn’t do.  None of us can, but we can commit to getting started today!

Jane Mason Wood emigrated with her parents and siblings from Scotland to Texas in 1851.  Her middle name, Mason, was in honor of her fraternal grandmother, Jean Mason (James Wood’s mother).  Jane would be widowed with young children, at the death of her first husband, Monroe Frazier and again when her second husband, John M. Patterson passed away.  All in all, Jane is a pretty amazing example of female strength.  Her children were noted for being Christians and exemplary members of the community.  In 1910, her memories were printed in a newspaper feature.  While the article has a few errors, it does provide us with a lot of insight into Jane’s life.

Monroe Frazier was born in 1833 in Sugar Creek, Arkansas.  His parents were Robert and Mary.  Monroe and Jane Mason Wood married in 1854 in (presumably, Hill County) Texas. They had four children during their marriage. Monroe Frazier enlisted in the Confederate Army in Hillsboro, Hill County, Texas on 28 March 1862 when he was 29 years old.  His service record listed his age as 27, but this is impossible if his date of birth is correct.  His service records also state that he had gray eyes and brown hair and that he was 5’ 10.75” tall.

Monroe became ill during the war and returned home.  He died on May 27, 1862, in Brandon, Texas, two months after enlisting and leaving home for the war effort.  I am including the three pages of his Civil War records below.

The Children of Jane Mason Wood and Monroe Frazier

Mary Isabella (b. 2 August 1855 – d. 7 May 1856) is buried alongside her father in the small cemetery south of Brandon known as the “Old Brandon Cemetery”.

Daughter Mary Christina was born on 8 October 1859 and died on 8 January 1945 in Paducah, Cottle County, Texas.  She married Thaddeus C. Stinson.  The 1910 U.S. Federal Census states that they had 9 children, but only 6 were living.  I have found the following children on census records, but I haven’t found all 9…yet.  Their children were: Jesse Melton Stinson, Robert Ferguson Stinson, W.T. (William Thaddeus) Stinson, Lillie B. Stinson, and James Alwin Stinson (who died at age 1 or 2).

The record below indicate that Monroe Frazier was 27 when he enlisted in 1862.  When he dies two months later, his headstone information states that he was 29.  I’m going with the 29 age because on 28 March 1862, when Monroe enlisted, I think the entire county was also enlisting at the same time.  It seems more reasonable that an error was made here rather than by his family when giving the funeral home folks his information. 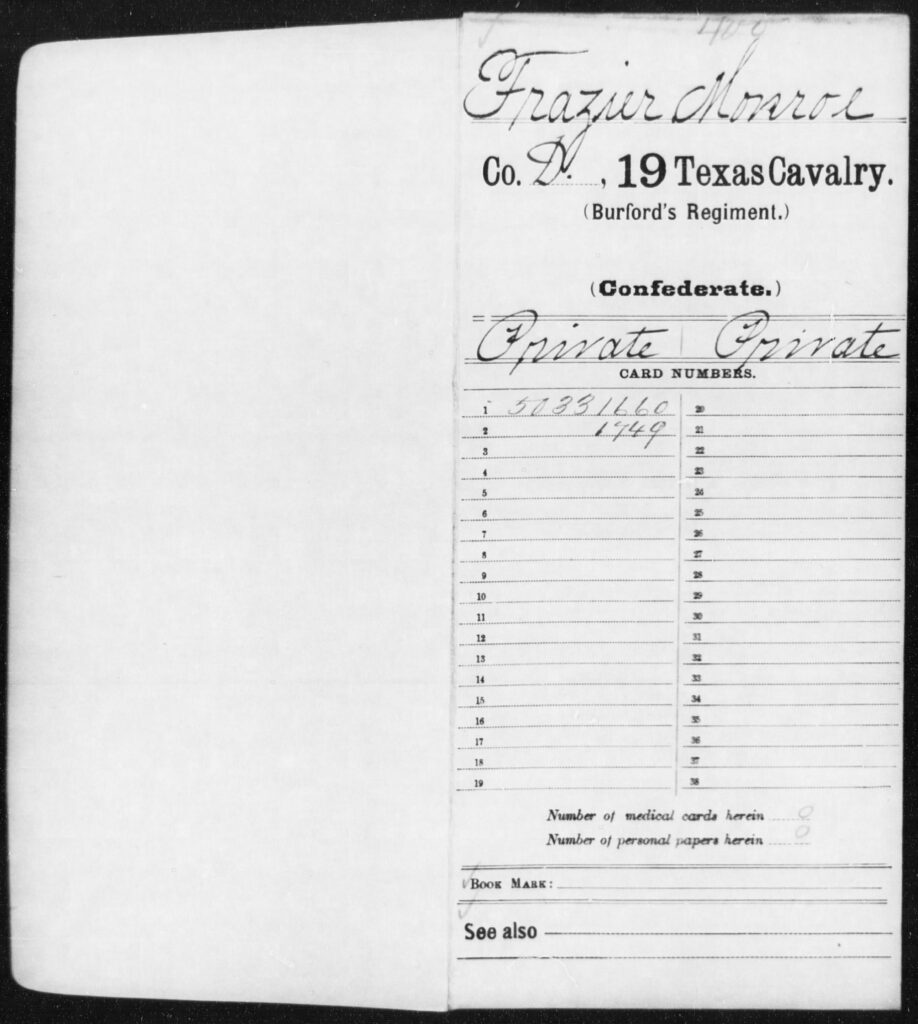