Robert Andrew Ferguson, R.A., Uncle Bob, the C5 Horse and Cattle Man…Grandpa Ferguson.  Whatever name you think he went by, he was a big deal in the part of Hill County.  He made his fortune in the gold fields of California and invested his gold in horses.  R.A. was supposed to have had more horses under brand than any man in the world and his obituary indicated that he kept them long past the time when he could work them.  He just loved his horses and spent a good deal of his fortune in his later years for the privilege to have them.  R.A. donated the land for what is present day Brandon and he provided farms for each of his children in the Brandon area.  He passed away in 1910. 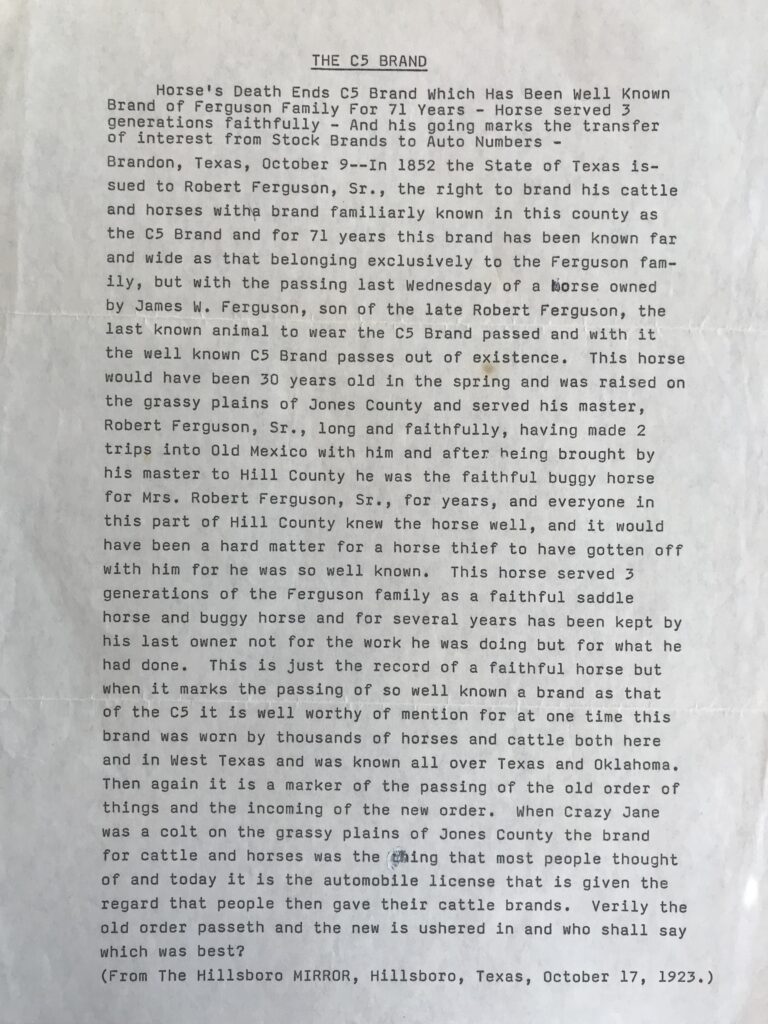 Brandon, Texas, October 9 – In 1852, the State of Texas issued to Robert Ferguson, Sr., the right to brand his cattle and horses with a brand familiarly known in this county as the C5 Brand and for 71 years this brand has been known far and wide as that belonging exclusively to the Ferguson family, but with the passing last Wednesday of a horse owned by James W. Ferguson, son of the late Robert Ferguson, the last known animal to wear the C5 Brand passed and with it the well-known C5 Brand passes out of existence.  This horse would have been 30 years old in the spring and was raised on the grassy plains of Jones County and served his master, Robert Ferguson, Sr., for years, and everyone in this part of Hill County knew the horse well, and it would have been a hard matter for a horse thief to have gotten off with him for he was so well known  This horse served 3 generations of the Ferguson family as a faithful saddle horse and buggy horse and for several years has been kept by his last owner not for the work he was doing but for what he had done.  This is just the record of a faithful horse but when it marks the passing of so well known a brand as that of the C5 it is well worthy of mention for at one tie this brand was worn by thousands of horses and cattle both here and in West Texas and was known all over Texas and Oklahoma.  Then again it is a marker of the passing of the old order of things and the incoming of the new order.  When Crazy Jane was a colt on the grassy plains of Jones County the brand for cattle and horses was the thing that most people thought of and today it is the automobile license that is given the regard that people then gave their cattle brands.  Verily the old order passeth and the new is ushered in and who shall say which was best?