The Day We Discovered Berber Linoleum 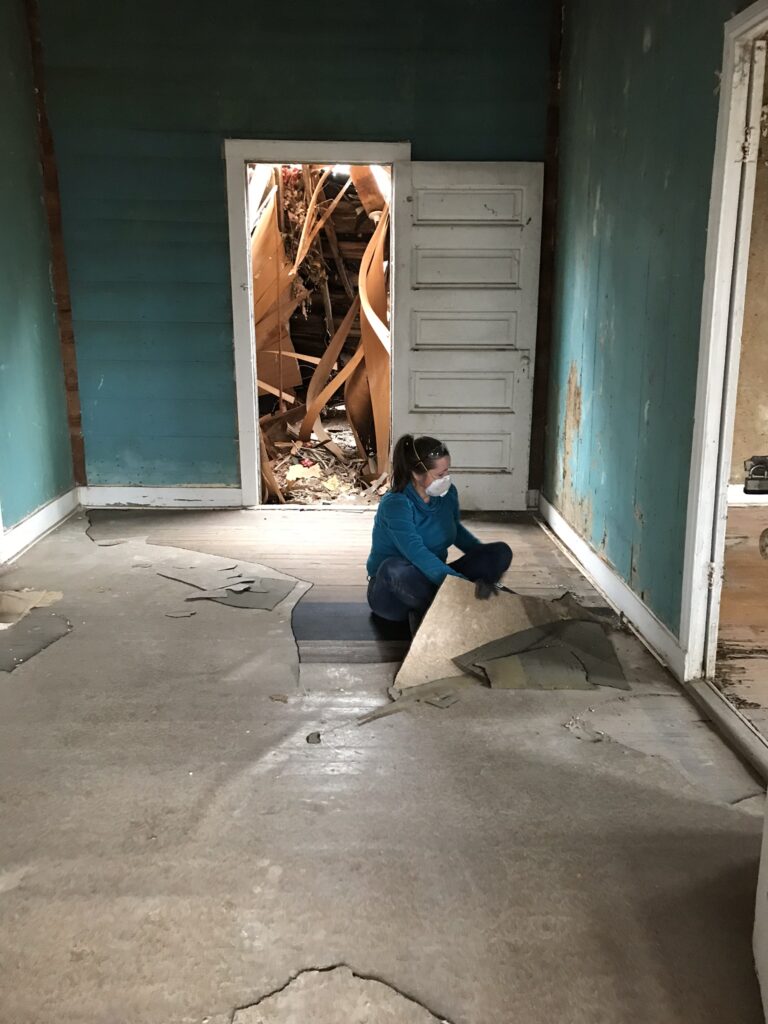 Once the house was emptied, we saw the floors for the first time.  Imagine our surprise when we saw that some very forward thinking soul had installed rainbow Berber linoleum.  It was so outrageously ugly that I was thankful for all the dirt and rat poop that obscured the flooring from view.  Offensive as it was,  the linoleum remained while we removed the sheet rock.  I hoped the linoleum would protect what I prayed would be pristine, beautiful, original hardwood floors.  My wishes almost came true.

The North Pen and Former Kitchen

The kitchen (aka the Cynthia Ann Parker Room or CAP) floor was a total loss.  Under the linoleum was some narrow flooring, stained very dark, but the majority of the floor was plywood patches.  It looked as if the room had had some water damage, maybe from leaky pipes. We were pretty concerned about the condition of the floor joists below. 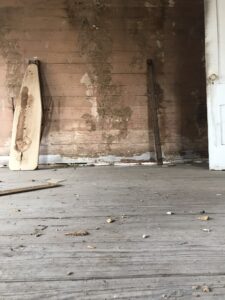 In the large north pen, we found crumbling particle board under the industrial tile, which was under the rainbow Berber linoleum.  The tiles were no longer attached as the subfloor was in pieces.  Again, we feared water damage, but once we chiseled up the subfloor, we found the original flooring.  The flooring was made of wide plank boards.  You could see the dirt under the house through the cracks.  There was significant water damage and rot on the floor and around the windows where rain had leaked in on the north wall.  No matter what, this floor needed to come up so that insulation and subflooring could be installed.  The joists needed to be inspected.

I hoped that the boards would come up and that we would be able to sand and refinish them.  Well…finishing them for the first time because they looked like raw boards that had seen years of use.  They were very gray and the area in front of the fireplace had been painted a milky white color. 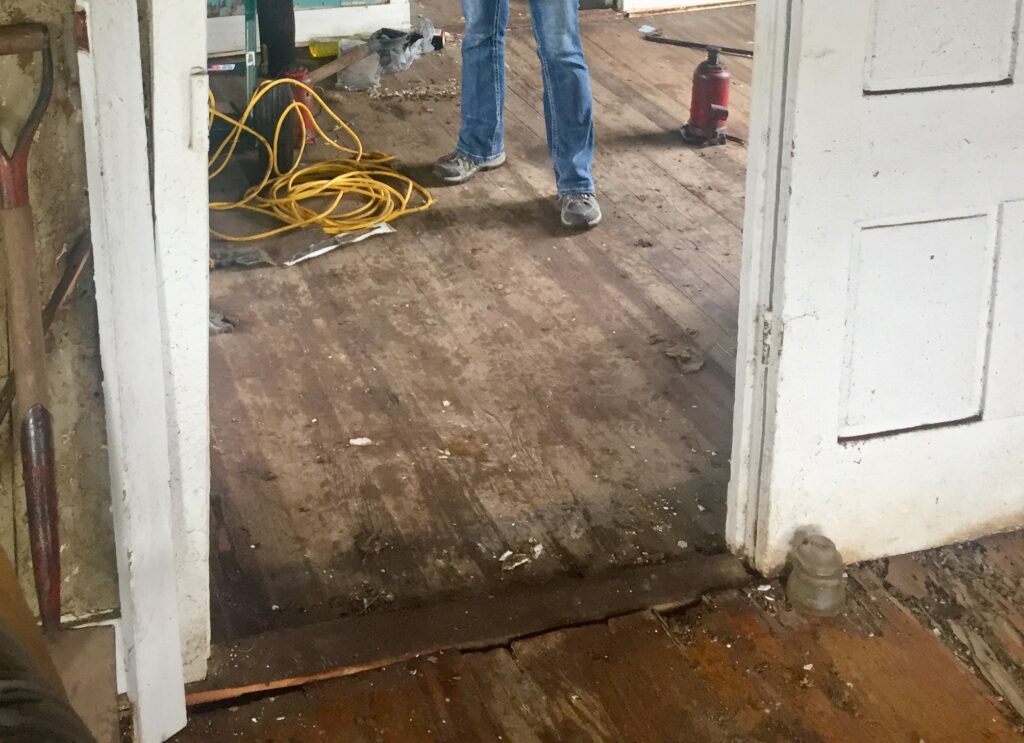 We found the same narrow, dark flooring in the center hallway and the former bathroom, but none of the wider plank flooring we found in the north pen.  Removal of the linoleum in the south pen revealed narrow oak tongue and groove flooring.  It had termite damage in several places.  You can see the center hallway and the termite damage in the south pen in the photo above. 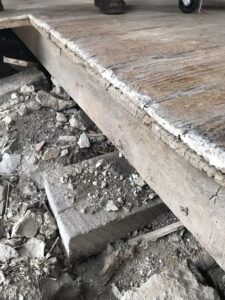 I was curious about the T&G flooring.  It had a nice finish on it (well, it once had a very nice finish).  Being a crazy history buff, I had read that settlers would make improvements to the room where they would have entertained company.  Seems like the south pen would have been the room of choice because I had also read that the south facing bedrooms were preferred as they were warmer in the winter.  A quick check of the flooring around the fireplace opening showed me what we were dealing with.

The oak had been installed over original flooring.

Unfortunately, there was different flooring throughout the house.  What was found, had damage…too much damage we felt, to patch or try to replace.  Jerry suggested using the original flooring to do one of the larger pens and then purchase flooring for the rest of the house.  I wanted the floors to glow and match.  We decided to go with new flooring throughout and started dreaming of all the ways we would be able to re-purpose the flooring we would be taking up.