Jerry and I had to make a lot of decisions before (and especially during) the renovation process.  There were a lot of compromises.  There were some fits.  Proudly, I can say there were no tears…at least no tears of frustration.  Believe it or not, it was the removal of the wallpaper tacks that had Jerry and I in disagreement for the first time in this project and that was AFTER we had to learn how to level the house with hydraulic jacks!

Of course, the sheet rock came down first and then the layers of wallpaper.  Both were easy enough to remove because, after all those years, they pretty much wanted to come on down.  Termites had eaten on the wall paper and left nasty little trails of poop and Heaven only knows what.  The job of removing the layers of materials was easy and straightforward.  But once the bare walls were exposed, Jerry and I had a decision to make and we were not really in agreement on it.

Many times during this renovation, I shook my head and asked “why on earth did you do it like this?”  or “What were you thinking?”  I certainly didn’t feel that was about the layers the previous residents had put up.  If it had been me, I think there may have been more layers between me and the howling north wind in an un-insulated, drafty house.  What I minded was the manner in which the wallpaper was hung. 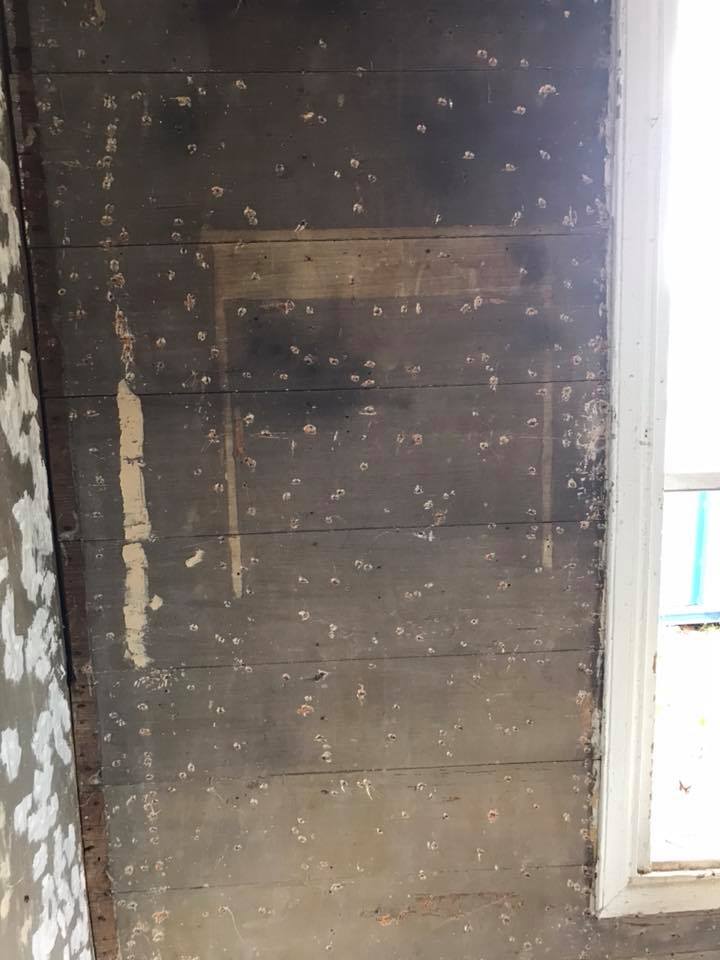 Nails (really more like tacks) had been used to hang all of the layers of wallpaper and in some rooms, that was three sets of nails in the wall.  And in some locations, it looked like they just drove nails in for the heck of it.  Many times we shook our heads marveling at the willingness to do lots of work that our predecessors had.  Whether it was in the roof or under the wallpaper, they drove copious numbers of unnecessary nails back when nails were hand-cut and driven in with a hammer.  Jeez…

To Pull or Not to Pull?

That was the question. Whether ’twas nobler in the mind (and eye) to suffer the presence of the nails, or to take arms (literally) against them, and, with a great deal of time and energy, remove them?  I was all for removing them.  Jerry, after about an hour of nail removal and surveying the sheer number of the little fiends in the wall, said to paint over the lot of them.

His was a better idea in the short-term.  We had so much other work to get done.  Pulling the nails would take days and then require us to fill and sand the holes before we could paint.   But if we didn’t pull them, I would have to look at them until the day I died and I was betting that I would live longer than it would take to pull the nails.  It was a near thing.  And wouldn’t you know it?  We had a bumper crop of time coming up in the form of Jerry’s spring break.

Y’all, imagine me convincing him that pulling nails for a solid week was the way to go.  I wish that I had it on video.

My Original Technique Was Terrible

Jerry is very aware of budgets, time, and me.  And I had already been pulling nails (a very low skill job for me, thankfully) and it was taking me forever.  The wallpaper tacks are flat headed and tiny.  There was no way to get anything under them to pop them out without damaging the wall.  The flattest tool I had was a metal putty knife that I would tap around the nail while attempting to work it out of the wall.  It took several taps and several go-arounds before the nail was removed.  There was no way this technique was going to work.  We headed off to Lowe’s for expert advice and a long look at our options.  This is what we found.

Cute little tool, huh?  We bought two and I returned to my tap, tap, tap method, gingerly removing nails so I didn’t damage the walls.

Suddenly, It Was a Party

We had great help!  Jillian and Mike came up for the weekend to help, God bless them.  They are the kind of people who jump in and work.  Mike grabbed one of the cute little tools, placed it near a nail, and whacked it.  The nail flew out of the wall and a small amount of the wall went with it.  Now, I admit that I gasped and really thought that there had to be a better way.  At the rate I was going, however, I knew I would never finish and Jerry’s patience was going to be running out soon.  Mike’s more aggressive approach was the solution and really, most of the time the nail was removed and little damage was done to the wall.  We were going to have to fill the holes anyway.  We got busy.

Mike’s method for removing the nails was great.  Really fantastic, especially if you look as cool as he does on a ladder.  I am a dork and don’t look nearly as cool.  In fact, after the first day, this is what my hand looked like.

This is what happens when you first start off doing renovation work.   I whacked my hand so many times I finally lost count.  Obviously, the learning curve is steep when you are using tools (glad we started with a hammer!).  I was thrilled when the nail removal switched over to the puttying and sanding phase…that sounded so much safer!