My grandfather, Warren Ferguson, was an all around great guy.  He was funny and loving.  He was a hard worker.  As a welder and tinkerer in just about everything, he was an invaluable member of his small farming community of Mertens, Texas.  Many of the farmers in the area will testify that Warren (Dadaw) could fix anything.  Dadaw would hitch his welder behind his pickup and go where he was needed.  I loved him bunches.

My grandparents were also life-long members of the only church in Mertens, the First Baptist Church.  My grandmother wrote the historical marker that resides in front of the church.  My grandfather built the handrails for the old building back, gosh, long before I was born.  In 2014, the church was torn down and a beautiful new building replaced it.  The handrails (shown in the photo to the left) were removed and stored in a nearby barn by Don Ballew, our dear friend and future general contractor.

When it was time to design the stairs in the new addition, I thought that an industrial look would be spectacular.  We designed the stairs out of metal with open, wooden treads.  Don quickly saw the perfect use for the handrails my grandfather had built and offered them to us to use in the house.  We were thrilled.

At any rate, the stairs were built and they looked amazing.  The stairs had to have handrails (we just happened to have a set laying around!).  The rails were built for a very gentle slope and we needed them for a real staircase.  In order for the rails to fit, their angle be adjusted to match the angle of our stairs.  Jerry and Jackie knocked that out in short order and welded the handrails on the stairs and the railing along the loft.  However, the rails that Dadaw built were very open.  That wasn’t a problem when they were on the ground.  Now they were up in the air, they definitely needed something to close the gaps so that no one (read grandchildren) would fall through them. 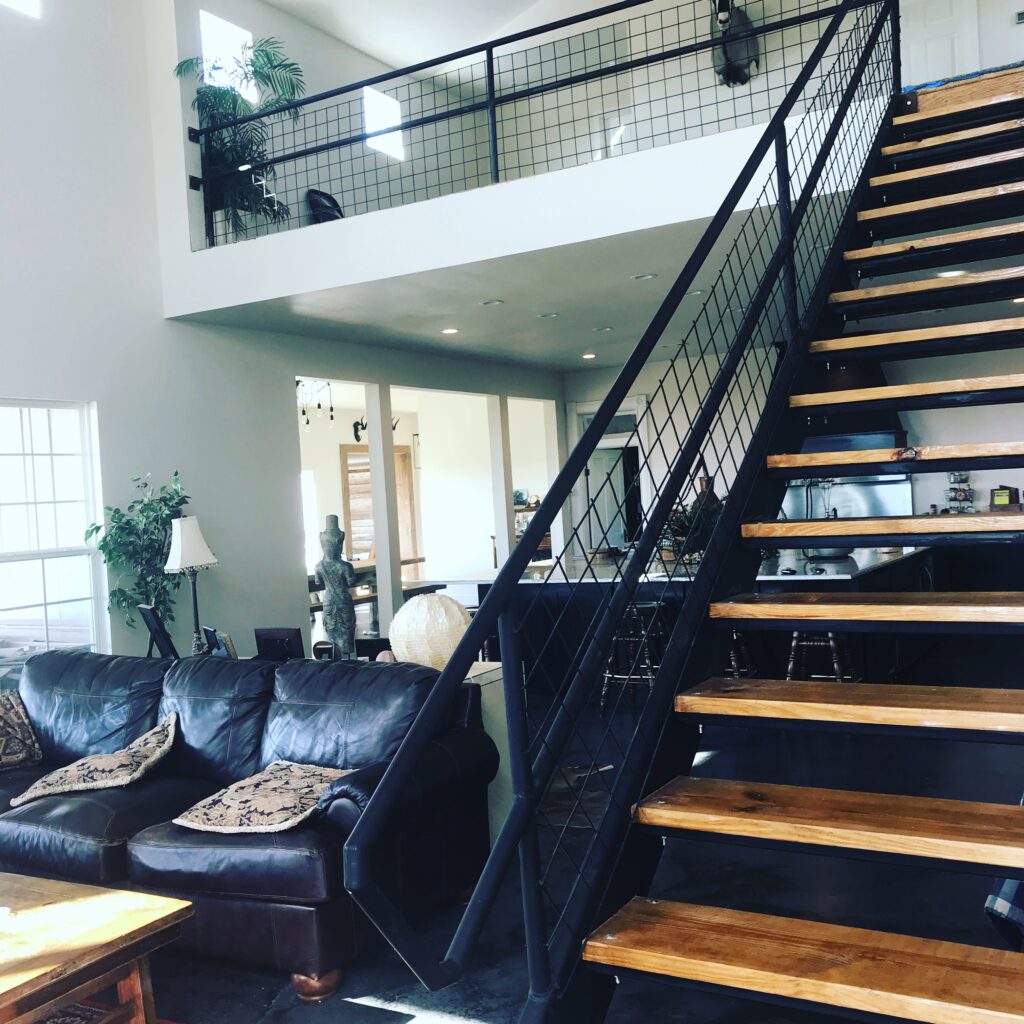 I love the stairs and especially the railing.  The old house was a dream come true.  There is a lot of history in that old house, but I had no memories attached to it.  I had never been in it before we were attempting to purchase it.  However, the rails are a different story.  I remember being little and doing flips on them.  My great grandmother used them to safely get into the church as did my grandmother and a host of other people I hold dear.  My parents walked past those rails on their wedding day.  I probably held onto them the day I met Jerry at a wedding at that church.

The best part of those handrails is that after all the work Jerry and I did ourselves on this house, it is a thrill to tell people that my grandfather built the handrails for us.