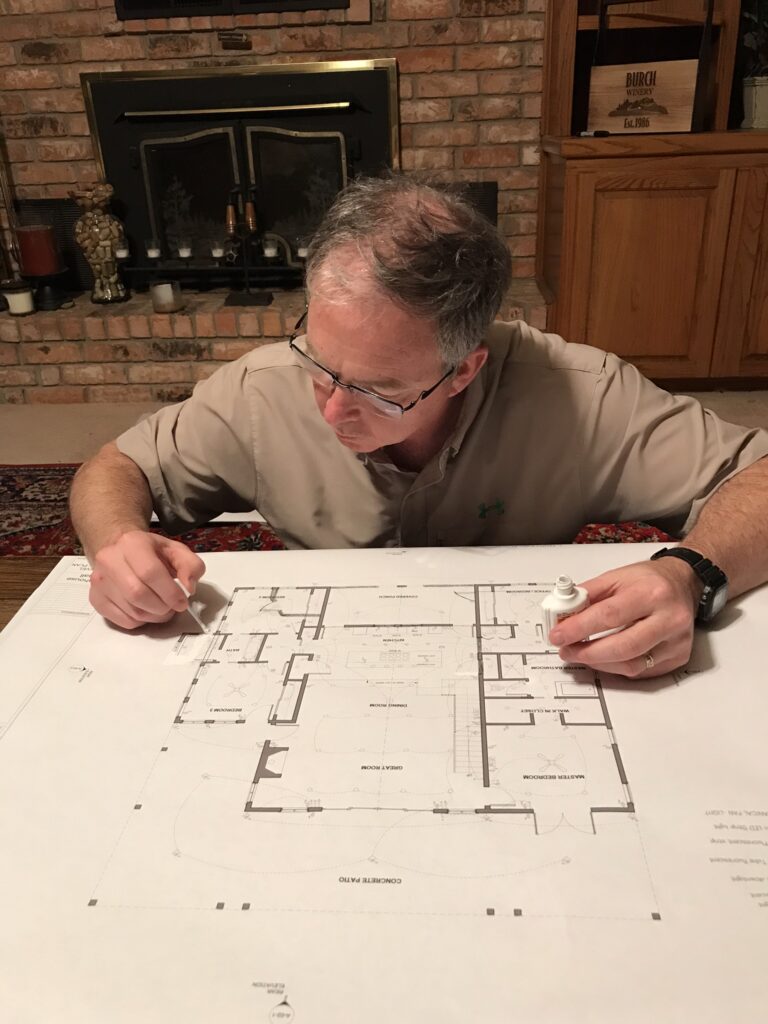 The Thing About Old Houses

Old houses are either tiny or spacious.  Neither likely have enough closet space.  That is just the way it is.  Our house was on the tiny side and it was not ready for 21st century living unless we were ready to do some serious lifestyle adjustments.  I was keen, at first, to try and fit into my ancestor’s home.  I soon came to the realization that there was not enough space in our historical home and that we would have to consider adding an addition in order to make the house functional for us.

Our commitment to the old house complicated attempts to design an addition.  We had a basic plan when we were attempting to purchase our historical home.  That was to purchase the old house, renovate it, and live in it.  Easy, right?  Maybe so and maybe no.

We didn’t want to significantly alter the house or build something that would overshadow the original home.  We had a strong commitment to the old house.  It was the most important piece of our grand plan.  It was historic and we were saving it, no matter whatever else we may be doing.  And we knew that we were going to have to do some sort of addition if we were going to live here. There wasn’t enough space.

And that sounds crappy.  When my great, great, great, grandparents bought the property in 1852, they lived here with their six surviving children and two more children that they had informally adopted when their parents died.  You can read about their story here.  That is a total of 10 people living in this house.  And we were saying that the three of us couldn’t abide in the same amount of space.  No, that’s not accurate.  By the time we purchased the house, the center breezeway had been enclosed and counted as living space.  The house was already technically larger than it was originally but we needed  additional space in our historical home.

We needed more space and I was afraid that adding more space in our historical home would detract from the old house and/or would make it seem less than it was.  We wanted to find a way to add space while keeping the old house the main thing.  The answer was a long time in coming because most of the options seemed like they would overshadow the historic home.

We attempted to design small additions onto the rear of the house.  That didn’t really work.  Any small additions meant that the old structure was more likely to have to be used on a daily basis.  We weren’t excited about the old house being the primary part of the house, but we were also concerned that adding a lot of square footage and not effectively utilizing the old house was a waste of money.  (Yes, Scottish thriftiness genetics were at play here.)  I can’t tell you how many times we drew plans and then ripped them up.  It was a tedious process and we went round and round.  I finally just asked Jerry, “What do we need?” and we started from there.

Jerry is a professor and has a ton of books.  I have a terminal degree and have a ton of books, too.  I have a lot of genealogy materials as well.  We knew we needed an office or we would be doing research at the kitchen table.  Been there, done that.  Not a great idea.

We love to cook and entertain and I have a lot of dishes and kitchen stuff.  We thought that putting the kitchen in the new addition made sense so that the plumbing and what not would be in a new structure and also so that we could have a pantry.  There just wasn’t enough space for us to stick storage into any kitchen design in the old house and that for certain meant that there would have to be additional space added to this historical home.

We have four children, three of whom have married and we have begun adding grandchildren to the party.  Jerry and I wanted a large dining room to fit a table that seats 14 folks.  We had this table built several years ago by our friends at Eden Farms.  The table is worth having a room built around it.  Just take a look at it!

So Much For Downsizing

I wanted to downsize when we started this process even after we realized we needed additional space in our historical home.  We only have Jacob left at home and so he, obviously, needed a bedroom.  There are only three of us living here.  I thought downsizing was possible.  But…Jordan and Anna come from Virginia and would need a bedroom when they came.  This is typically at holidays when our other kids, John, Beth, and John Warren and Jillian, Mike and Izzy, come as well.  Okay…everyone gets a bedroom  That brought the total number of needed bedrooms to five (grandkids will have to make do in their parents rooms or on the bunk house style bunk bed their grandfather really wants to build for them).  Five very small bedrooms were the goal now.

We needed a laundry room and a room for wine storage.  A pantry would be great.  A powder room would be fantastic because I am not a fan of people going into my bedroom.  And so, with this line of thought, we began to make progress and realized that we were going to build a house behind the house to take care of our wants.  The old house would serve as two guest rooms, a guest bath, two sitting rooms and an office for us.  But what would the addition look like???? 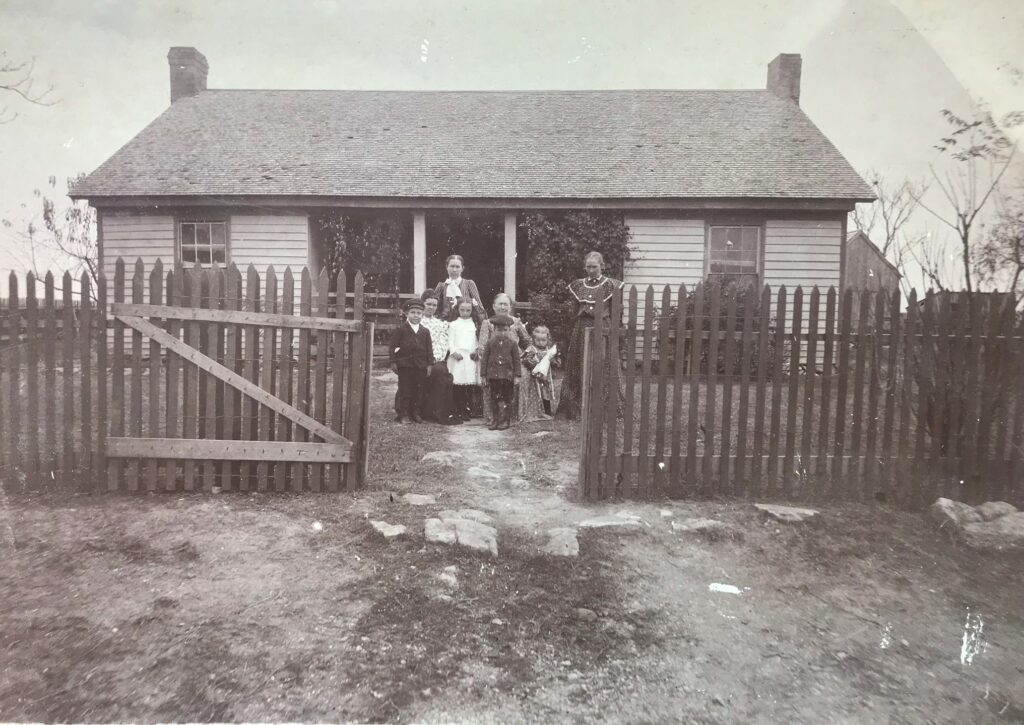 We were fortunate enough to get some ideas from the distant past.  We found an old photo of the house taken around 1900.  You can just barely glimpse a couple of structures behind the house on the right.  We assumed that these were barns or sheds.  These assumptions were verified in an old book.   A.Y. Kirkpatrick described the property in his book, The Early Settlers Life in Texas.  In his book, Kirkpatrick stated that there were three horse barns behind the house and that the future first sheriff of Hill County was residing in one of them.  If the future sheriff of Hill County could live happily in a barn, I knew we could, too.  We settled on the idea of a barn built behind (but connected to) the old house as the right way to add additional space to our historical home.

In Search of a Barn

And so that is what we started designing.  A barn behind the house where the new kitchen and bathrooms would be.  That way, the majority of the plumbing and such would be in the new house and we could remove all the old plumbing from the old house.  It seemed like the best use of the old house, too.  Gently used was our goal.  Guest rooms,  a parlor, and office seemed to fit the bill.

It still wasn’t easy going.  The barn addition was going to be metal construction and then it was switched back to stick.  The roof was too steep for metal and was redone for metal only to switch back to the original design when we shifted back to stick construction.  When the HVAC guys looked at the plan, they said there was no room for duct work in the attic, which caused us to go back to the metal roof plan so we had the space.  At times, I had no idea what we were going to end up with.  But I was sort of okay with that.  After all, I was up to my eyeballs in rat poop and rotten wood in the old house.  The new house was just going to have to take care of itself more or less until we could spare a brain cell for it.