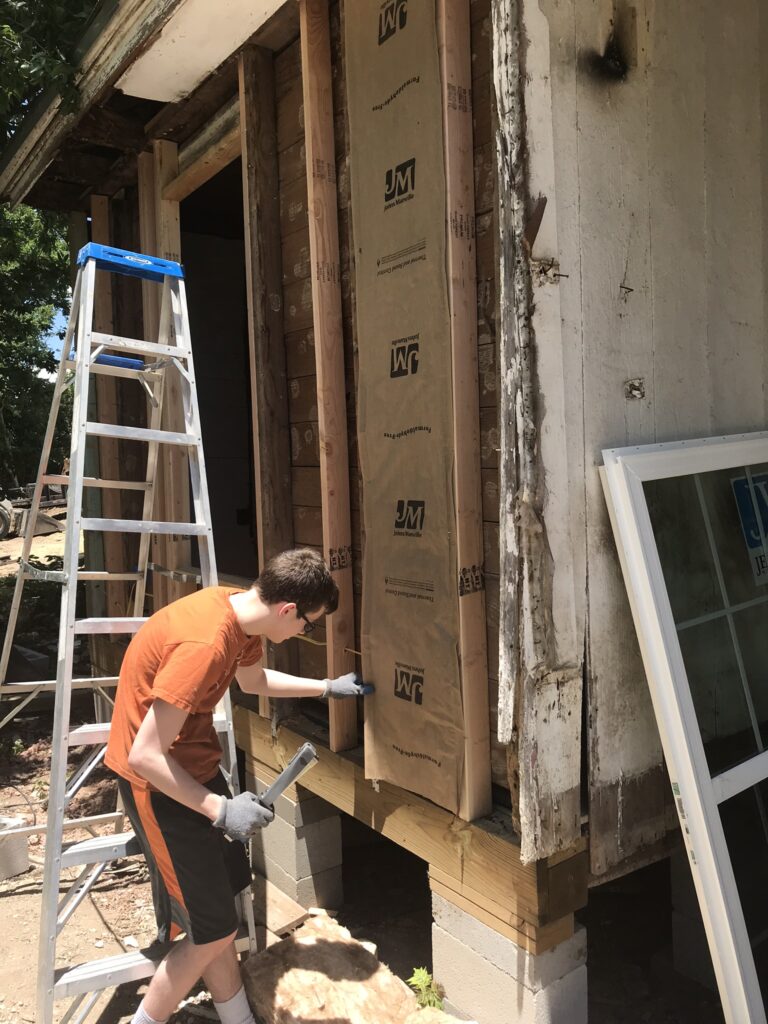 Working From the Inside Out

We were to the point where we needed to focus on some important elements of the restoration.  Things like electrical wiring, insulation installation and the first layer of the exterior of the house on the kitchen/bedroom corner of the house.  The interior walls were all original shiplap and  I didn’t want to touch it anymore than we had to.  I was learning that once we touched something, we caused three times the work.  Old houses don’t like to be messed with.  Therefore, the shiplap in the former kitchen needed to remain in place, ready for spackling and a coat of paint (hopefully, all it needed).

And so we tore off the clapboard siding and replaced any rotten framing we found.  Depending on what we found,  we replaced an entire stud, other times we added a new one beside the old.  We only worked on the west side of the house at first.  We then began running electrical wiring.

Jerry was in charge of the wiring.  He designed the electrical plan and got to work.  If I didn’t have a project I could do alone, I would help him, otherwise, he was on his own.  We drilled holes through what seemed to be studs made of concrete (gotta love old growth lumber) and pulled and pulled and pulled wiring.

Once the wiring was in place, we started installing the rolls of insulation.  We had considered using spray foam insulation in the old house, and, looking back, we might should have.  It is incredibly efficient.  However, it also expands to like 1,000 times its volume and it seeps through every crack and cranny.  There are a lot of cracks and crannies in this old house.  There are ways around it, but they seemed labor intensive for the benefits we might expect.  We also didn’t want the sill logs underneath the house covered in foam.

The construction history of the house was as important to us as the interior spaces and we wanted people to be able to see it for as long as the house stood.  And then there was the very likely prospect that we would have to get under the house and re-level it through the years.  Breaking the insulation up seems like it would be counterproductive and not worth the added work.

And so we went with the rolls of insulation.  As you can see, the original framing is wider than traditional framing and that caused issues with the insulation installation.  It was just another wonky experience we had while dealing with our old house. 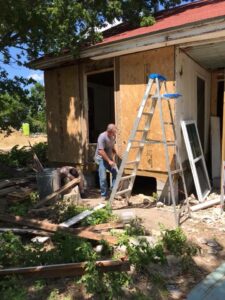 After the insulation, we screwed OSB (click here to compare OSB to plywood) to the exterior.  The OSB is supposed to give the structure added strength (something we thought the old girl needed).  OSB also has the benefit of being considered a “green product” only because it can be made from smaller trees.  I am not sure that qualified as green or not…

OSB is heavy.  I can’t even begin to tell you how heavy it is.  Well, actually I can.  One sheet is 78 pounds but seems like 1,000 especially after you have been working in the Texas heat all day and you still have several pieces to install.  I was always so grateful to our friends at Lowe’s who loaded sheet after sheet into Jerry’s truck.  I only wish they would have come to help at the other end.  Again, you can also see that we attacked this job one section of wall at a time.

Because OSB is made of pieces of wood, it will swell up like a toad if it gets wet.  Once we started putting up the OSB, we had one eye on the forecast so we could get the waterproof construction fabric over it in case it rained.

The OSB wasn’t a finished polished product by any stretch of the imagination, but it did look strong and straight and clean.  We were excited that people who drove by could see that we were working and trying to make things better for the old house.  But as lovely as she was starting to look on the northwest corner, that kitchen/almost bedroom still didn’t have a floor or windows.