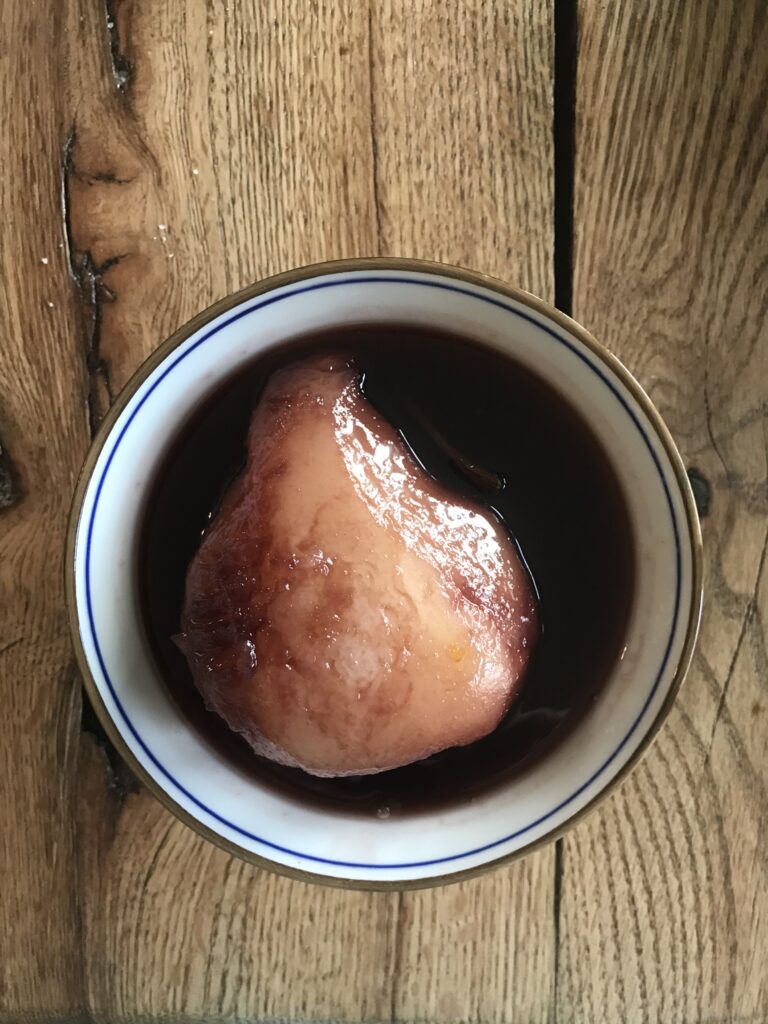 I am not a huge fan of cooked fruit.  Pineapple on a pizza?  Nope.  Apples and pork?  No, thank you.  Fruit pies are hit or miss with me as well.  I do love a cobbler, though.  I just made poached pears in mulled wine in my Instant Pot.  They were incredible and didn’t remind me of any of the cooked fruits I had had before.  They were super sweet.  The mulled wine reduction was what made them so good.  The spices (cinnamon, bay leaf, and cloves) did their job by adding depth and complexity to the wine.  The wine gave the dish an extra level of fruitiness.  It was perfection.

Why Were Poached Pears On The Menu?

Simple.  I have never had them.  For those of you who know me, you know that this was ample reason for the experiment.  However, there was a bit more to it.  I had an idea…(everyone who knows me understands how dangerous this could turn out).  I invited my Society Daughters of the American Revolution (Ft. Graham Chapter) over to see the house.  They will be here in April and I also volunteered to do the program that day which is going to include a lunch for them.  I have the choice of either doing a Texas pioneer (1850’s) menu or a Colonial American menu.

If the luncheon goes well, I have toyed with the idea of doing them on a regular basis for others in the community as a way of raising the funds for a scholarship in honor of James and Isabella Wood.  The Texas pioneer or Colonial American themed dinners served in our historic home being the draw.

So the DAR luncheon is set and I need a menu.  Both poached pears and mulled wine are old recipes from Colonial America.  I had never had the poached pears and thought I needed to try them to determine if they could be on the menu.  Also, the DAR chapter will probably be in the range of 30-40 people.  I need a dessert that is easy to serve, easy to make, and authentic.  Could I come up with a tasty Instant Pot recipe for poached pears in a mulled wine reduction?

I swear that there is nothing my Instant Pot can’t do.  (There was that one time we tried to cook pasta in it and that was a disaster…probably user error.)  There are a ton of Instant Pot recipes online for stewed fruits to include poached pears.  My thought was “Why not?”  and so I gathered my ingredients and winged it.  I am so glad I did!

Peel the pears.  Place the wine, sugar, cinnamon, and cloves in the Instant Pot.  Mix until sugar dissolves.  Add whole, peeled pears.  Place lid on the Instant Pot and cook on high (steam) for 9 minutes.  Quick release the pressure.  Remove pears.  Switch to saute function and reduce the mulled wine to a thick sauce.

Place pears in small bowls and spoon sauce over the pears.

NOTE:  Next time, I may add the juice of an orange to the sauce and then slice the orange and cook the orange slices with the pears.  I could then use them as garnish.

Poached pears in a mulled wine reduction is definitely going to be on the Colonial American menu when I host the luncheon for the DAR chapter.  However, I am pretty sure that it will be a staple on our personal menu as well!