Hugh was the oldest of the Wood’s son and was the first to leave home in search of his fortune.  Hugh’s letters show that he was desperately trying to find a place for himself.  There was an economic disaster in the United States during this time period and that may account for why he had so much trouble finding work.  He talks about his desire to come home in almost every letter and also of his love of his family.  I keep wondering why he left in the first place and why he didn’t come home when he had the opportunities to do so.

While reading the letters of the family, it appears that James Wood experienced financial difficulties resulting from the purchase of the land at the Colony of Kent.  Kent failed and the land he had purchased had reverted back to Richard Kimball, the land agent prior to the arrival of the Woods in the summer of 1851.  I don’t know if he was ever able to get his money back (see letter from James’ brother, Dr. Hugh Wood).   Dr. Hugh Wood had stated that James and his family would be his heirs, but upon his death, it was determined that he didn’t have a will and his estate when into the court system.  James was already in Texas, and Margaret Candlish is appointed administratrix of the estate.  She and her husband determine that James actually owes the estate money.  James asked a Mr. Reid (I think he was a brother-in-law to either Isabella or James) to represent James in court in Scotland.  A letter to Isabella (after James’ death) by Mr. John Reid states that the Wood’s had been treated unfairly and that many things they were told were not accurate, which caused their “financial ruin”.

Did this financial distress keep Hugh searching for his fortune elsewhere so he could send help home?  I’ll keep looking…. 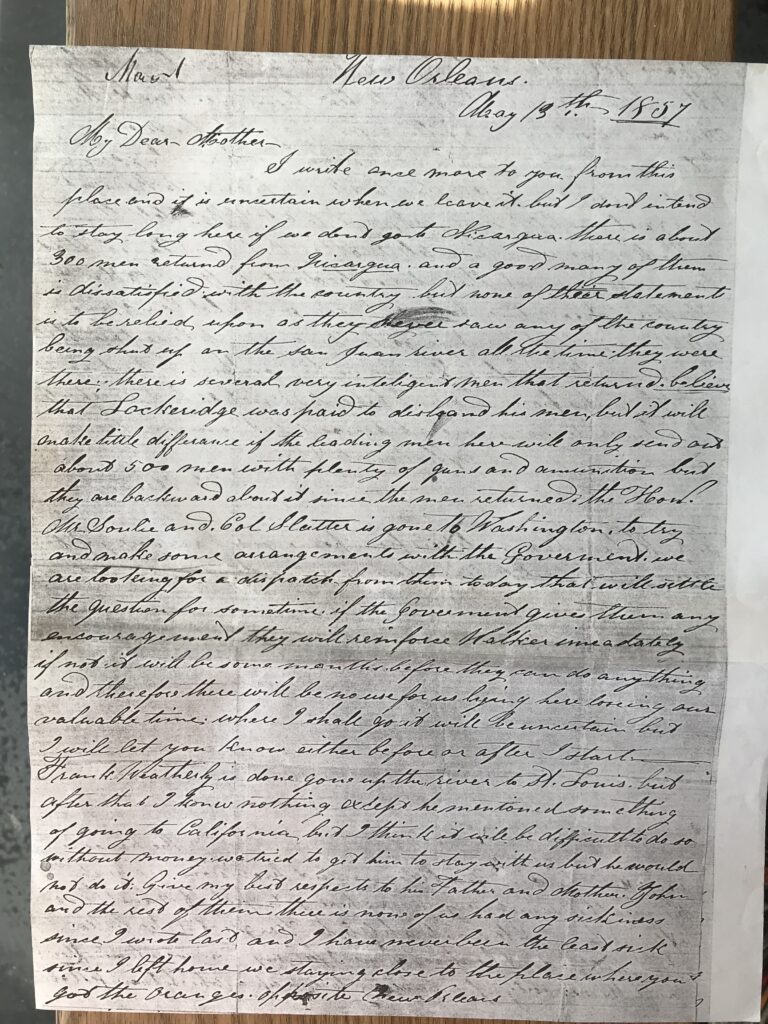 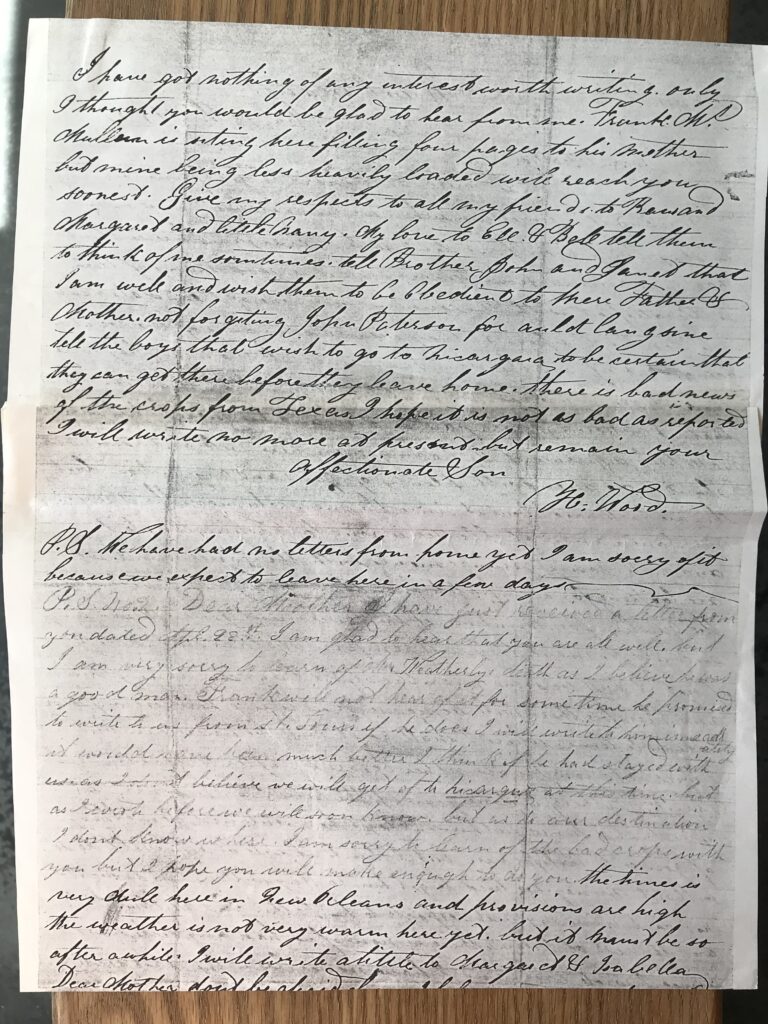 I write once more to you from this place and it is uncertain when we leave it but I don’t intend to stay long here if we don’t go to Nicaragua.  There is about 300 men returned from Nicaragua and a good many of them is dissatisfied with the country but none of there statements is to be relied up on as they never saw any of the country there.  There is several very intelligent men that returned.  Believe that Lockeridge was paid to disband his men, but it will make little difference if the leading men here will only send out about 500 men with plenty of guns and ammunition but they are backward about it since the men returned the home.  Mr. Soulie and Col. Slatter is gone to Washington to try and make some arrangements with the government.  We are looking for a dispatch from them today that will settle the question for some time.  If the government gives them any encouragement, they will reinforce Walker immediately.  If not, it will be some months before they can do anything and therefore there will be no use for us lying here losing our valuable time.  When I shall go it will be uncertain but I will let you know either before or after I start.

Frank Weatherly is done gone up the river to St. Louis but after that I know nothing except he mentioned something of going to California but I think it will be difficult to do so without money.  We tried to get him to stay with us but he would not do it.  Give my best respects to his father and mother, John and the rest of them.  There is none of us had any sickness since I wrote last and I have never been the least sick since I left home.  We are staying close to the place where you got the oranges opposite New Orleans.

I have got nothing of any interest worth writing only I thought you would be glad to hear from me.  Frank McMullen is sitting here filling four pages to his mother but mine being less heavily loaded will reach you soonest.  Give my respects to all my friends to Rans and Margaret, and little Nany.  My love to Ell and Bell.  Tell them to think of me sometimes.  Tell Brother John and Janet that I am well and wish them to be obedient to their Father and Mother not forgetting John Patter for auld lang sine.  Tell the boys that wish to go to Nicaragua to be certain that they can get there before they leave home.  There is bad news of the crops from Texas.  I hope it is not as bad as reported.  I will write no more at present but remain your affectionate son,

PS We have had no letters from home yet.  I am sorry of it because we expect to leave in a few days.

PS No. 2 Dear Mother, I have just received a letter from you dated April 28.  I am glad to hear that you are all well but I am very sorry to learn that Mr. Weatherby death as I believe he was a good man.  Frank will not hear of it for some time.  He promised to write to us from St. Louis.  If he does, I will write to him immediately.  It would have been much better I think if he had stayed with us as I don’t believe we will get to Nicaragua at this time but as I wrote before, we will soon know but as to our destination, I don’t know where.  I am sorry to learn of the bad crops with you but I hope you will make enough to do you.  The times is very dull here in New Orleans and provisions are high.  The weather is not very warm here yet but it must be so after a while.  I will write a little to Margaret and Isabella.  Dear mother don’t be afraid.