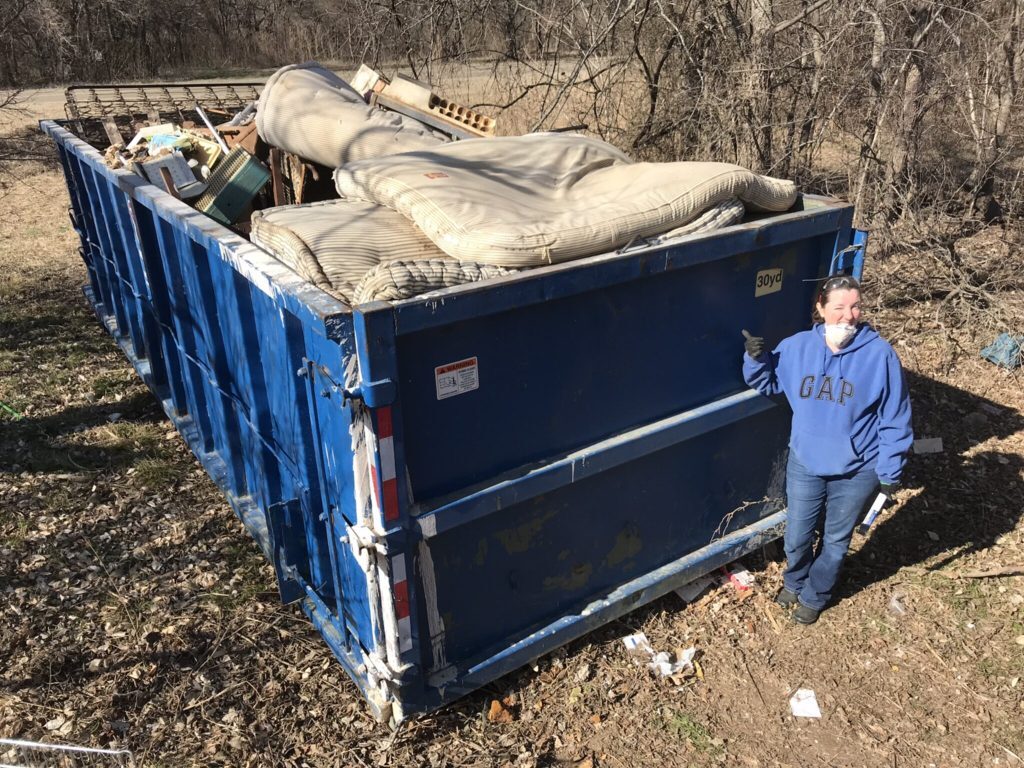 Without a doubt, a big blue dumpster may be the best magic trick ever.  It was delivered in our front yard and we immediately started filling it.  The picture above shows one day’s worth of work.  And then more magic happened.  They took this one away and left yet another empty one that was soon filled to the brim as well.  Please do not think that we went crazy and threw everything away.  We didn’t.  Jerry and I donned respirators and gloves and went through every box, every drawer, every everything before the dumpster was even on the premises.  You can see some of the treasures we found in this little story.

The truth was that the last 80 years or so had not been very good to the house.  Aluminum windows had been installed (an upgrade at the time).  Rotten siding had been replaced, but not with matching material.  The front of the house had a fairly nice red roof on it, but that roof only wrapped about a foot over the apex and then it was three layers of crumbling asphalt shingles on top of the original wooden shakes.  The interior was in bad shape as well.  The floor coverings were crumbling.  Rats had infested the house.  The fireplaces had begun to crumble and had to be filled in.  At some point, a stove was installed in the large north pen and the smoke from it had turned the walls dark gray.  My friend, Carol Wolaver, saw the pictures and wanted to know when the fire had taken place and how badly it had damaged the house.  No fire…at least one that wasn’t contained.  The owners just didn’t have the means or the desire to make the necessary (and correct) repairs, renovations, upgrades (whatever) that the house needed.  Time had taken its toll long before we arrived and tried to scoop it all back together.

The Beauty of Before and After Photos

The absolute beauty of a before and after photo comparison is that in an instant, one is able to see the change that something has experienced.  A photo of someone before and after losing 100 pounds is exciting because it is just so darn dramatic.  The countless days of dieting and exercising and making progress by the ounce isn’t as much fun, but no major undertaking happens overnight.

Below are the photos of what the house looked like the day we bought it and what it looked like after we got the trash out of it.  I regret that I don’t seem to have any photos of some of the rooms before we started tearing down the sheet rock.  Forgive me please for the oversight of not taking any during this process.  There is still a striking bit of difference between the photos and I think you can get a sense of what a difference those blue dumpsters (three total) made.  This doesn’t show the number of trips we made with armloads of trash.  They also don’t show the rats that ran out from furniture (or the one that sat and watched me clean out the kitchen cabinets).  I confess that I still love the drama of the before and after photos, even though the rooms have mostly been completed now.  Here are a few of my favorite before and after shots of just the removal of the trash (probably the easiest of the tasks we had).  Enjoy!

Yeah…we had to clean our way into the house. 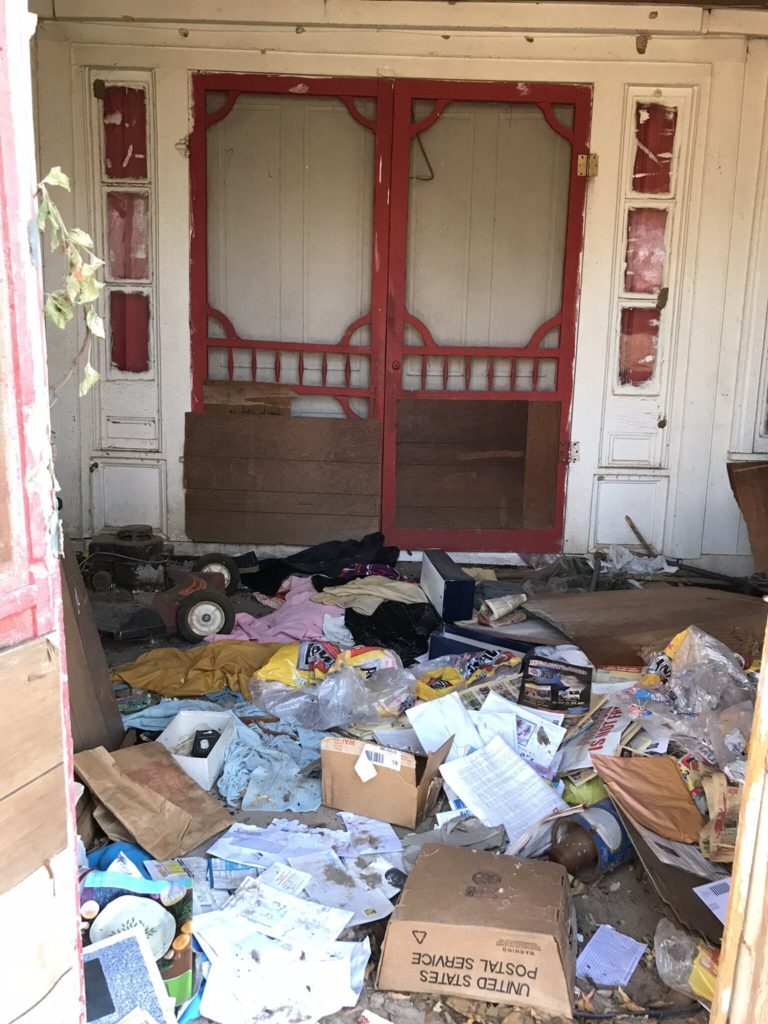 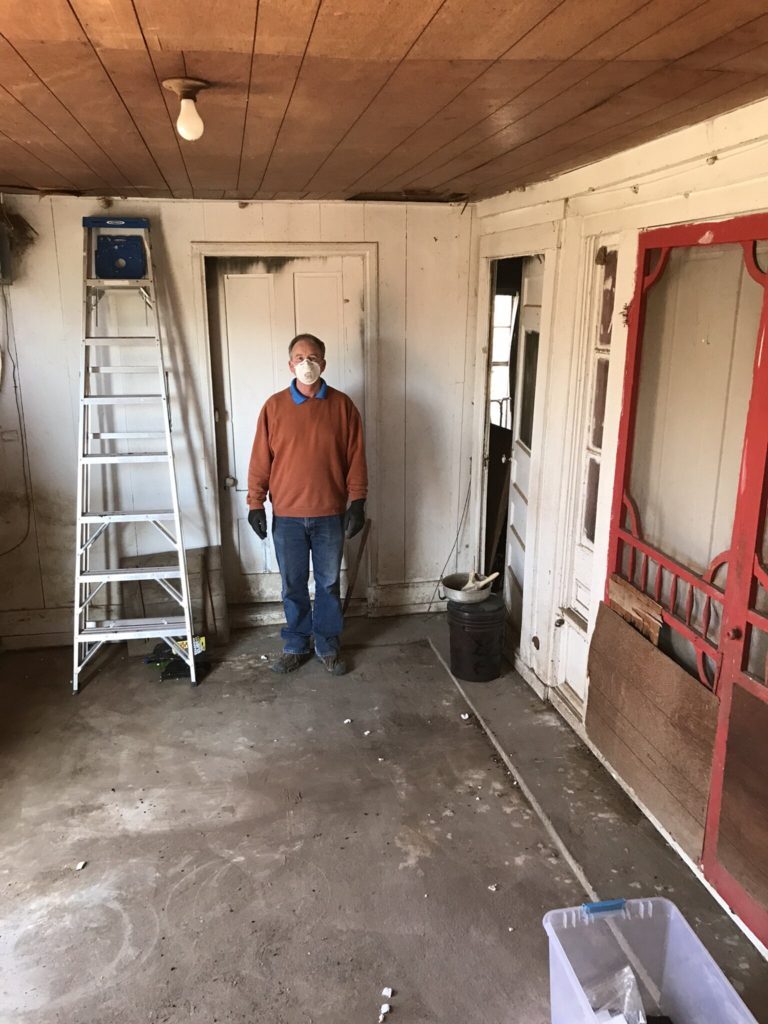 Trash removal revealed a non-original concrete slab.  Knowing that we would have to remove it with a jackhammer and rebuild the floor were added bonuses.  When we found out that the rattlesnakes were living under it, I almost jumped for joy.  Just kidding…it was just an ugly problem from the beginning.  And yes, the last rattlesnake was found under the last little bit of this concrete and was found by…you guessed it, me.

You could barely open the right side of these double doors.  The room had items of great value to someone (trash to us) everywhere.  The last occupant had made trails through it so he could get around.  By the time we bought the house, people had entered the house and looted it, taking a few pieces of furniture.  I will always wonder if they ended up with some photos or letters. 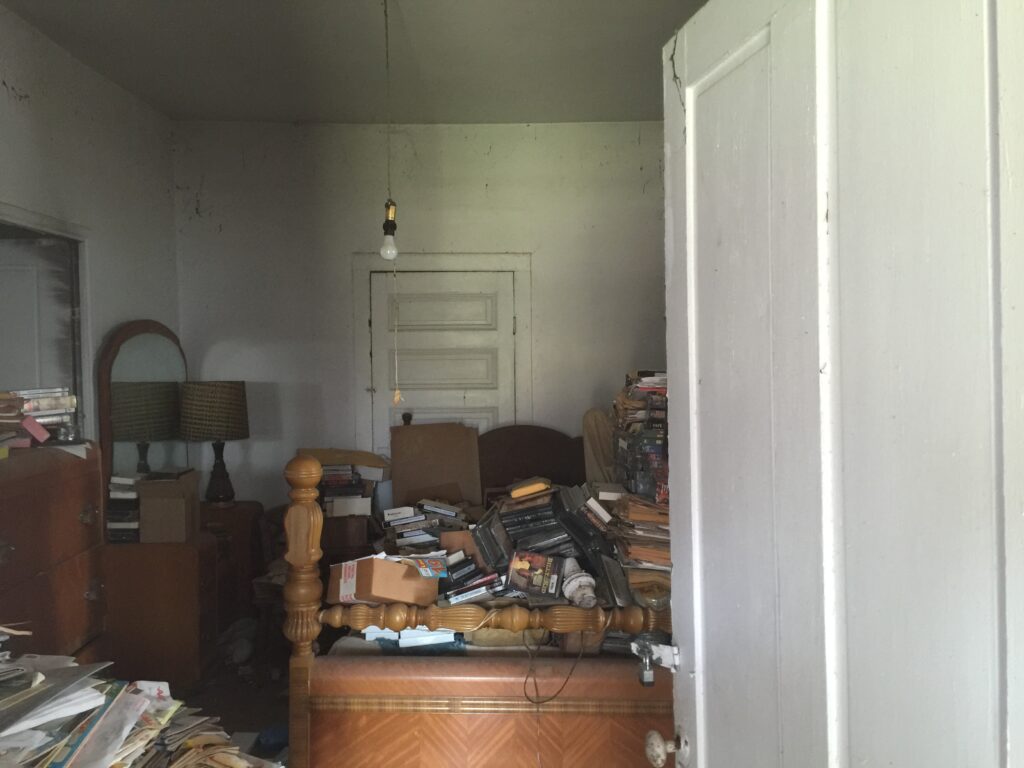 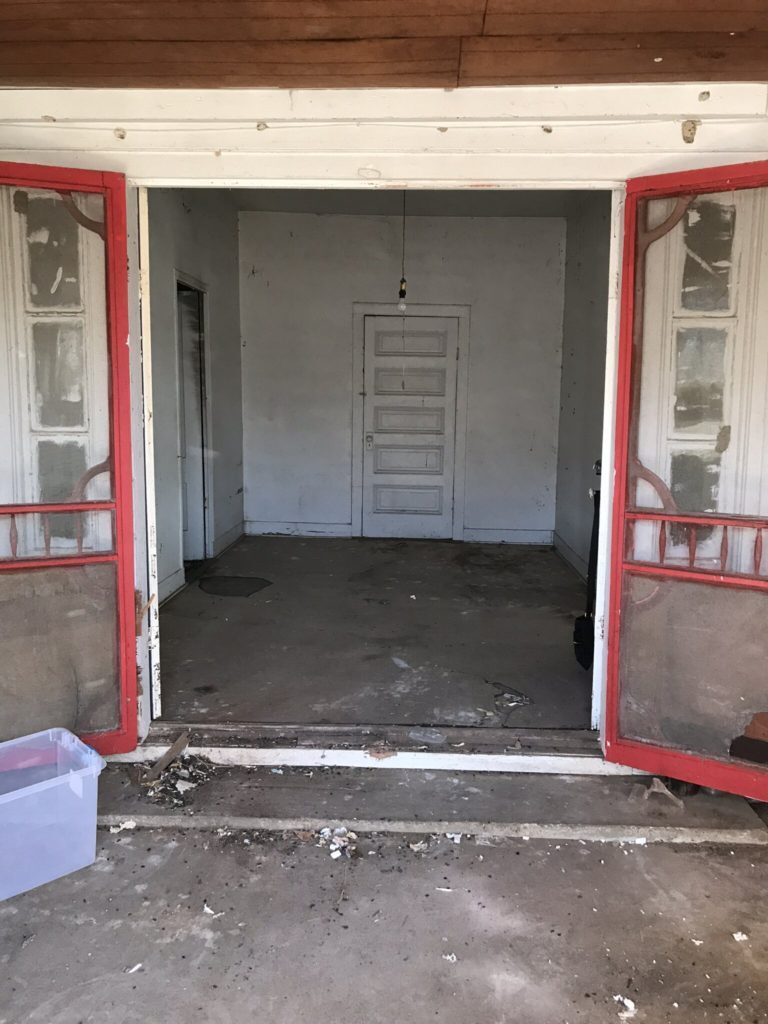 The center hallway had been an open air passageway and was originally open at both ends.  The doors on the left and right are exterior doors (they have locks on them).  The back wall and door are not original.

This picture isn’t the day we were beginning to clean it out, but it makes me laugh because of the dreamy look on my face.  What on earth was I seeing?  A completed project, I think.  This picture shows the trash that was in the house, but it also shows the condition of the house as well.  Sheet rock is falling from the ceiling.  Underneath, there are three and four layers of wall paper (even on the ceiling).  The curtains show how much all the fabrics in the house had rotted.  The mattresses and bedding were rat infested messes. 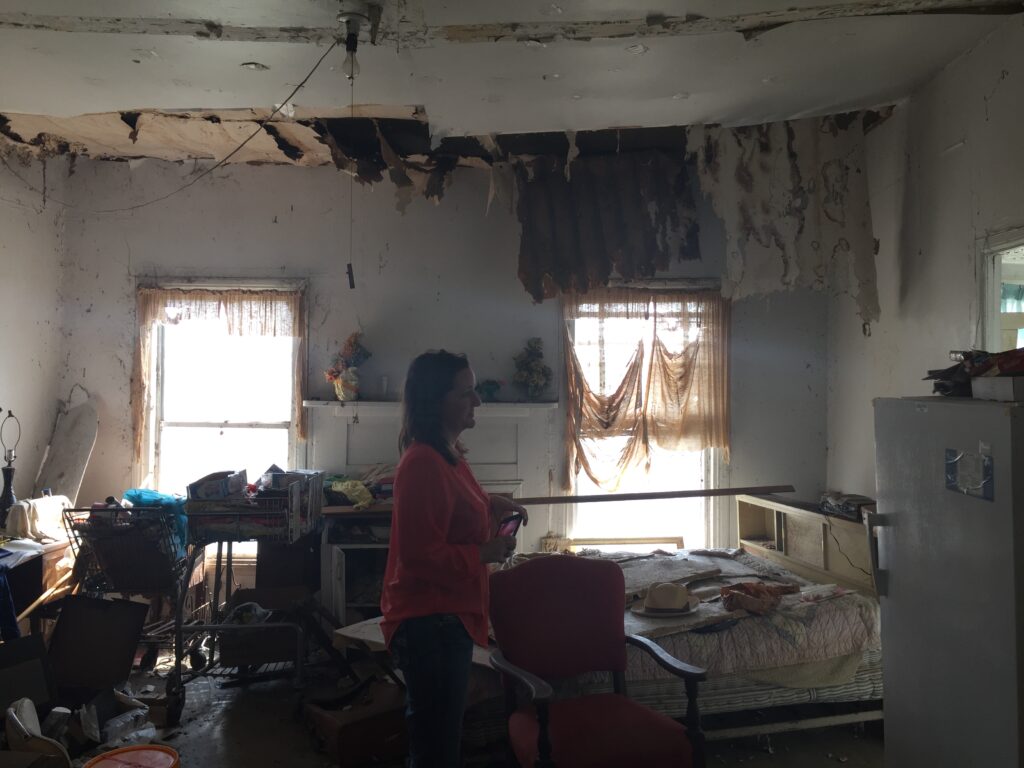 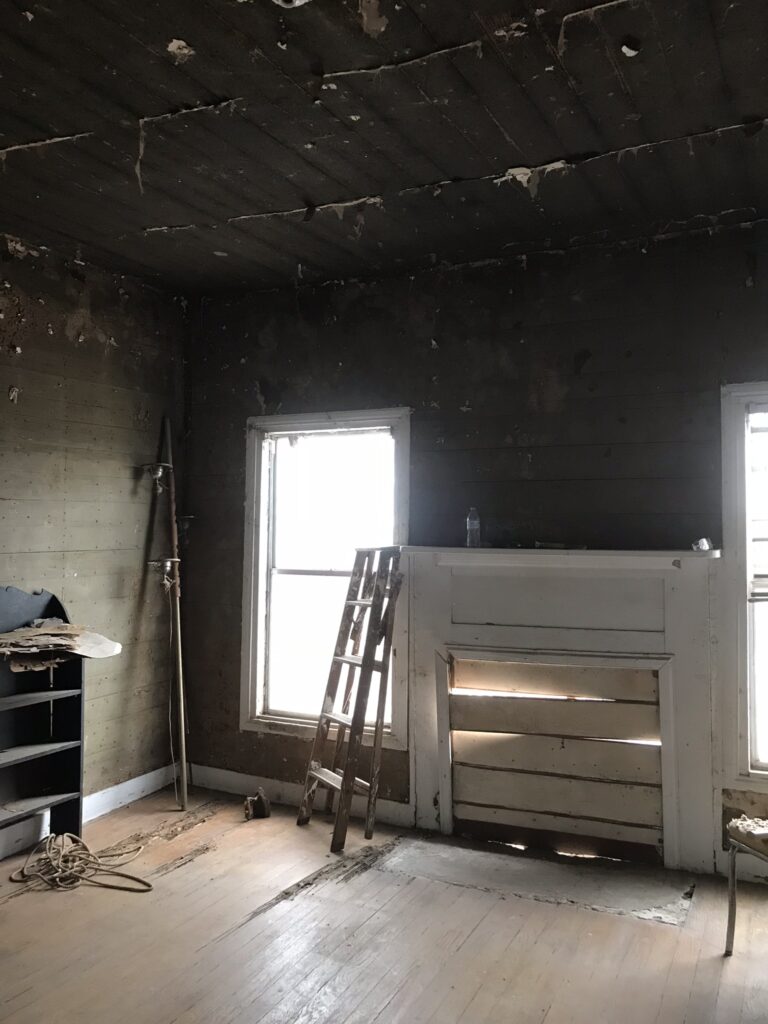 Below, you can see how gray the walls are from the soot/smoke.  The north pen was the room in which the stove had been installed.  This room also had linoleum, printed to look like a rainbow Berber carpet, of all things.  That linoleum partially covered the room.  There were the tiles you see below throughout the room.  These had been installed on top of particle board that was now little more than sawdust.  The particle board covered the original floors. 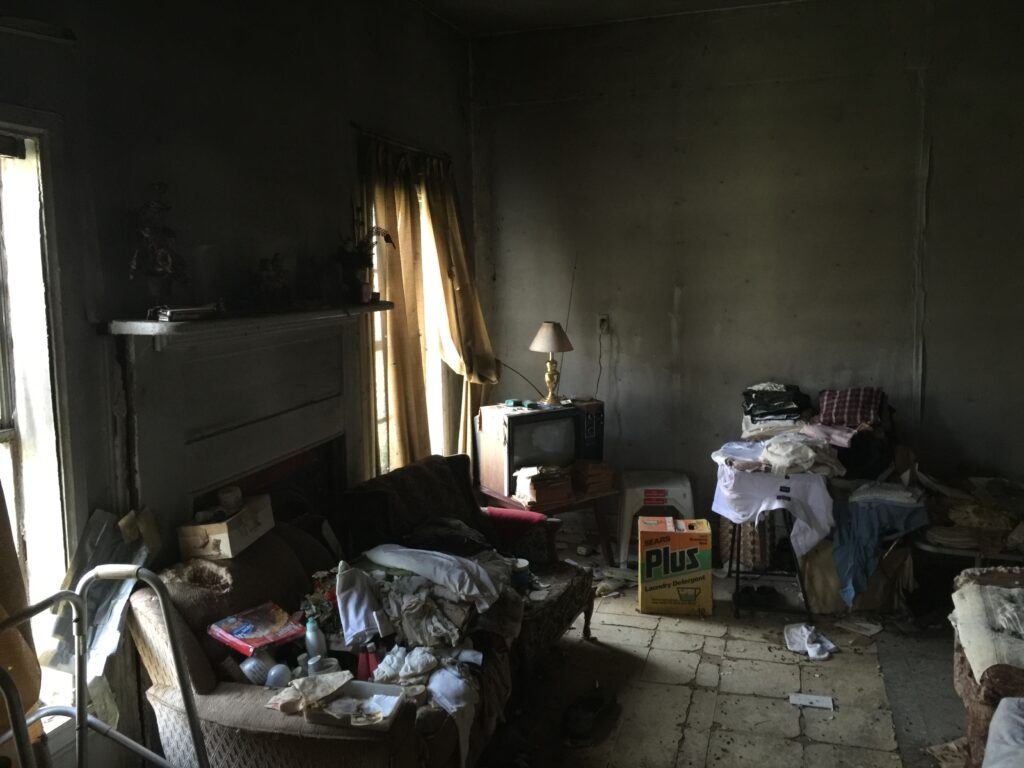 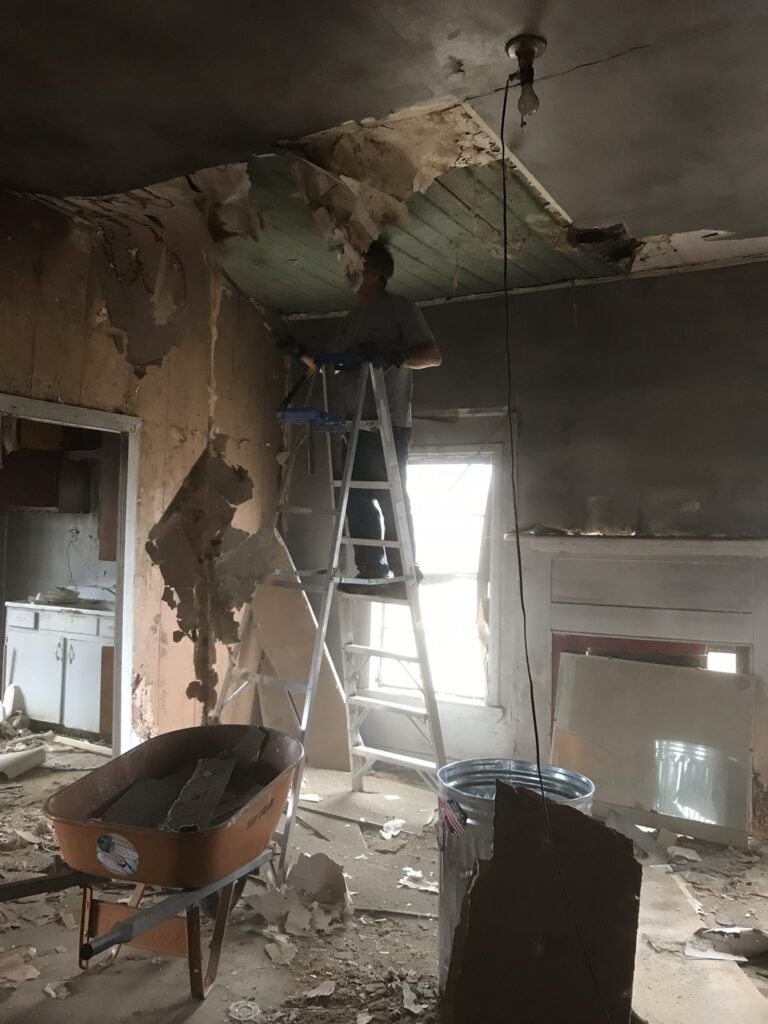 If you felt cheated that you didn’t get to see the mess we made removing the sheet rock, here is a snap for you.  The curtains being gone really helped with the amount of light in this room, but I think that all the dark gray, soot covered sheet rock being gone was a huge part of brightening it up.

Ah…the room they called the kitchen.  It wasn’t a kitchen to begin with, of course.  The door to the refrigerator had rusted and fallen off.  A huge rat was living in the oven.  The window over the sink used to be the same side and the other window, but was replaces with a smaller one when they converted the room to a kitchen.  In the photo below and right, you can see that the ceiling boards are falling in this room. 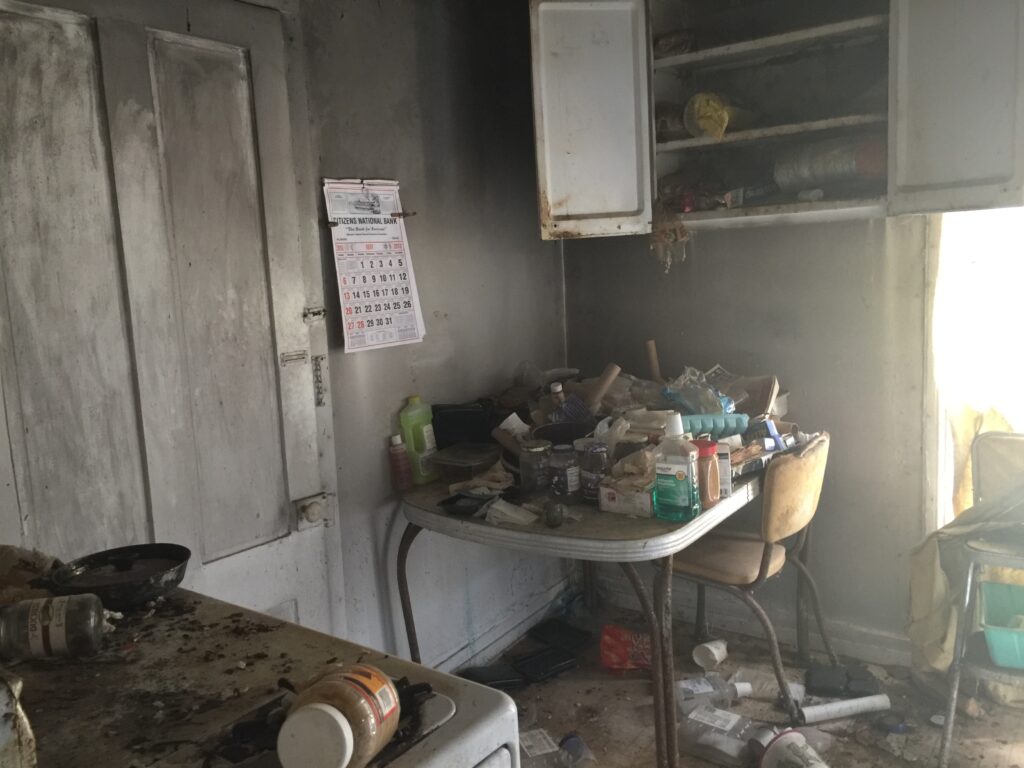 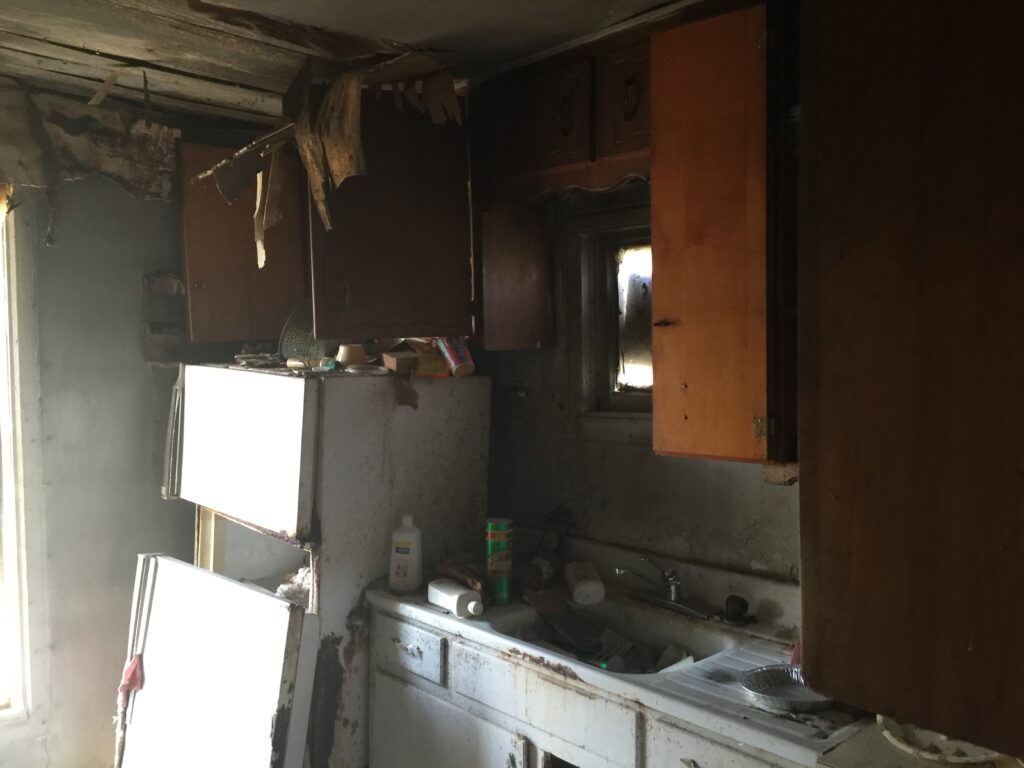 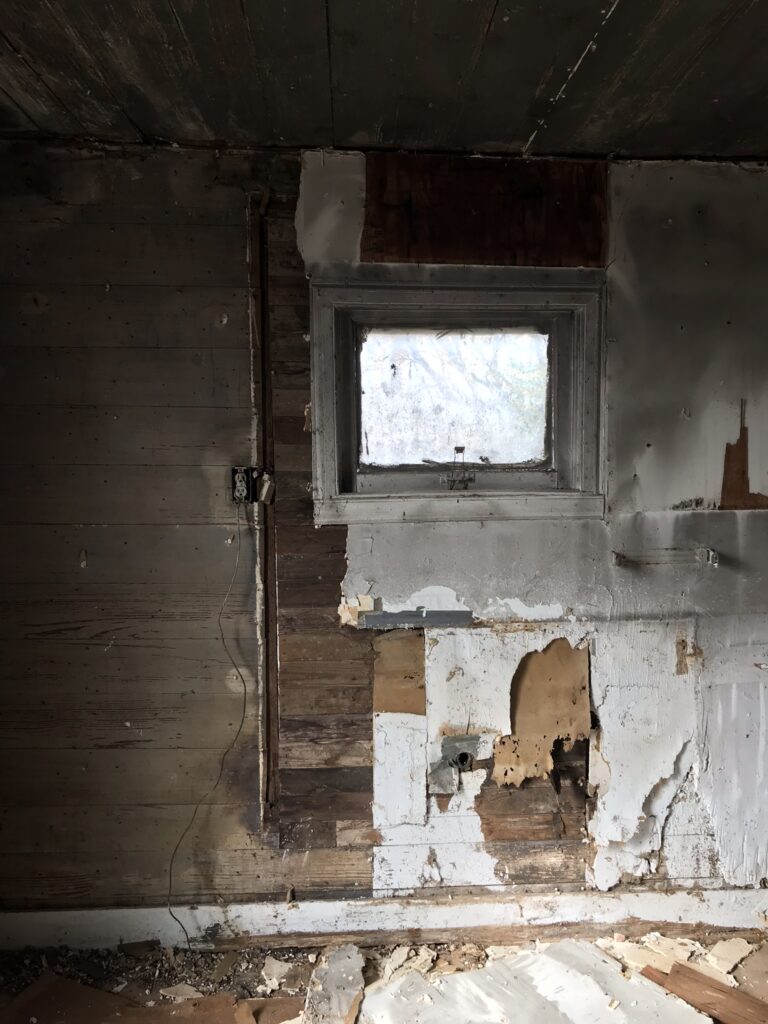