I have been dreaming about my grandma house for a long time.  I was disappointed that we weren’t in the Homestead last year, but the joy that we experienced this year certainly made it worth waiting for.

First, we had the a great Thanksgiving which ends with us putting up the Christmas tree.  That was an adventure in and of itself.  We had a new tree this year and so, it was our first time to put it up in a new house where we had never had a Christmas tree before.  Lots of firsts means lots of learning. 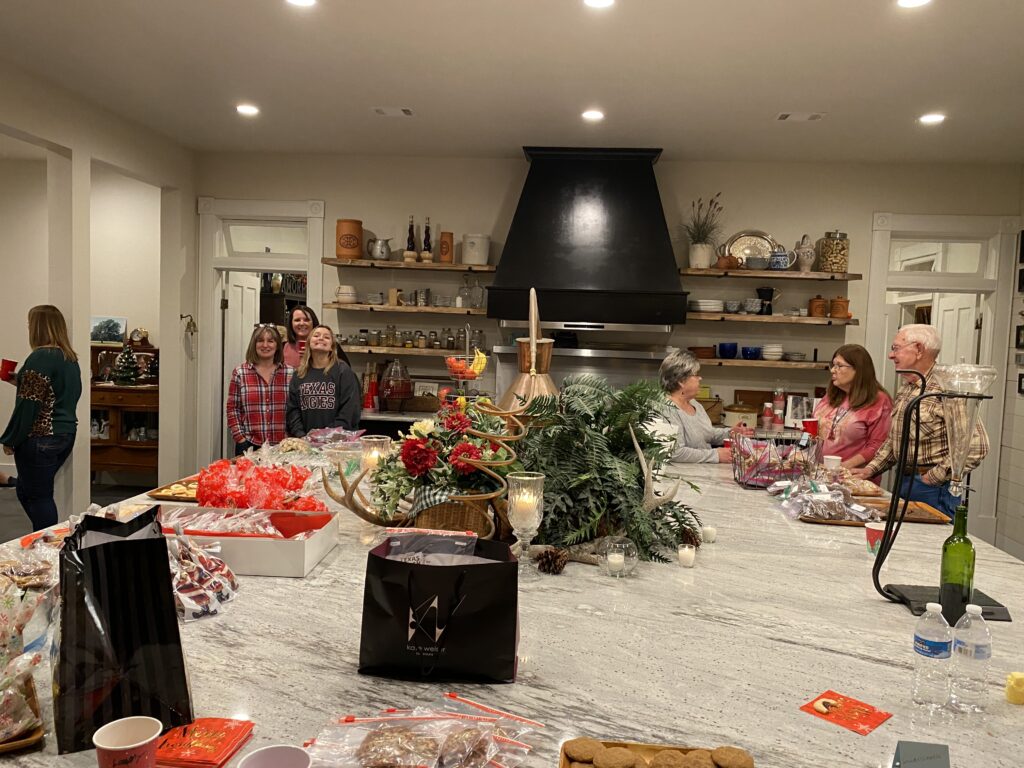 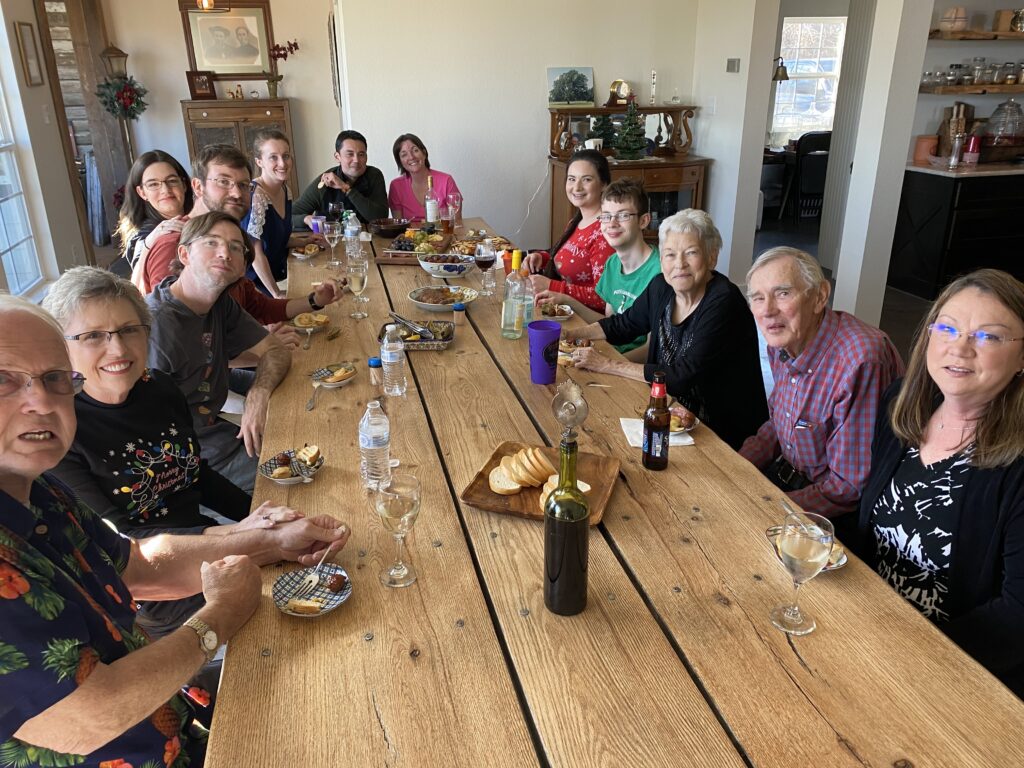 Y’all…holidays are busy and are hard.  This year, we invited folks over for a pre-Christmas visit with the kids.  This was great because we are rarely all together.  My dad and Carole came over.  Jerry’s parents, Lucille (MeMe) and Gerald (PaPa) came over with Missy.  Instead of planning a full-on holiday meal, Jerry and I whipped up some savory appetizers.  This allowed everyone to spend a relaxing afternoon visiting instead of cooking and then cleaning up from a huge meal. 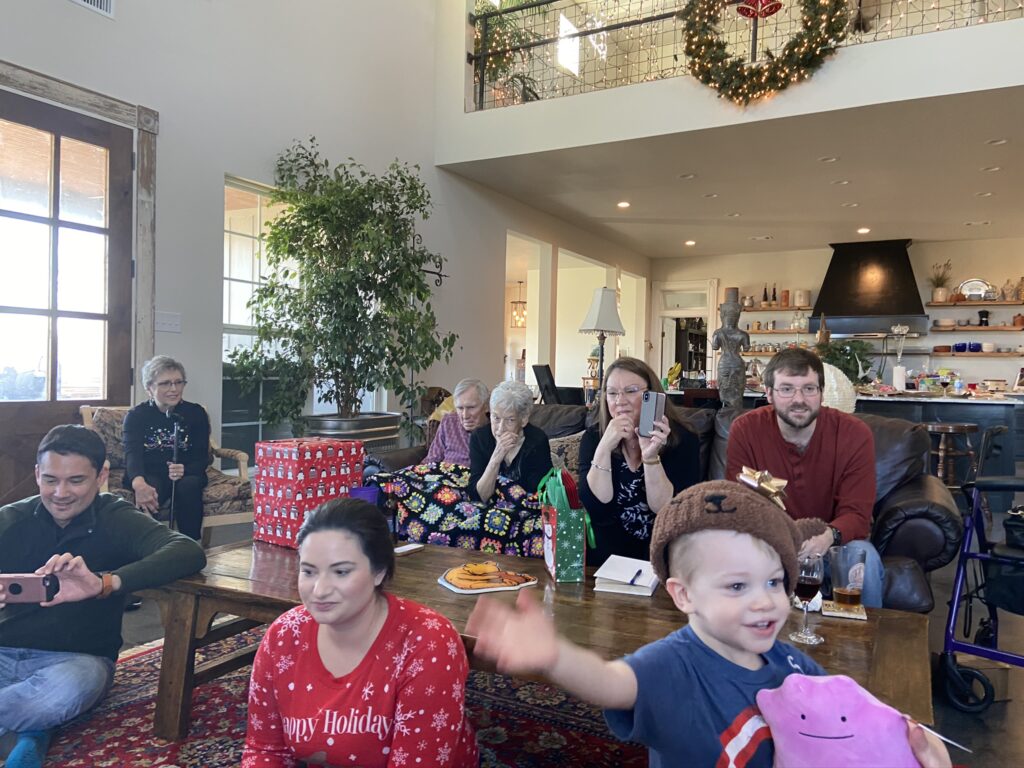 Later that evening, we enjoyed the homemade tamales we had made.

I love traditions, but I am not afraid to ditch the ones I don’t like or to start new ones (if they are good!).  Christmas morning breakfast is a bit of a struggle.  I mean, Santa has just come and everyone is running around so excited about that.  We eat our main meal at noon, and so there is a tremendous amount of preparation that needs to begin pretty early in the day for that to be on the table on time.

So breakfast is problematic.  It is a holiday, so cereal seems a bit understated.  It is a holiday with a huge meal looming in the not-too-distant future, so a huge breakfast doesn’t make good sense either.  What is a Nana to do?  My Nana served up bacon and eggs like we weren’t going to eat until sometime the next day.  This Nana had a different idea.  The idea paid homage to our cultural heritage which is the heritage of the great, great, great grandparents who first live here.  But haggis and eggs for breakfast is a bit of a difficult sell in some circles.  Fortunately, not in my circle.  We all enjoyed a plate of Scottish goodness and some of us were lucky enough to enjoy it with a dram of 20 year old Scotch.  Slainte! 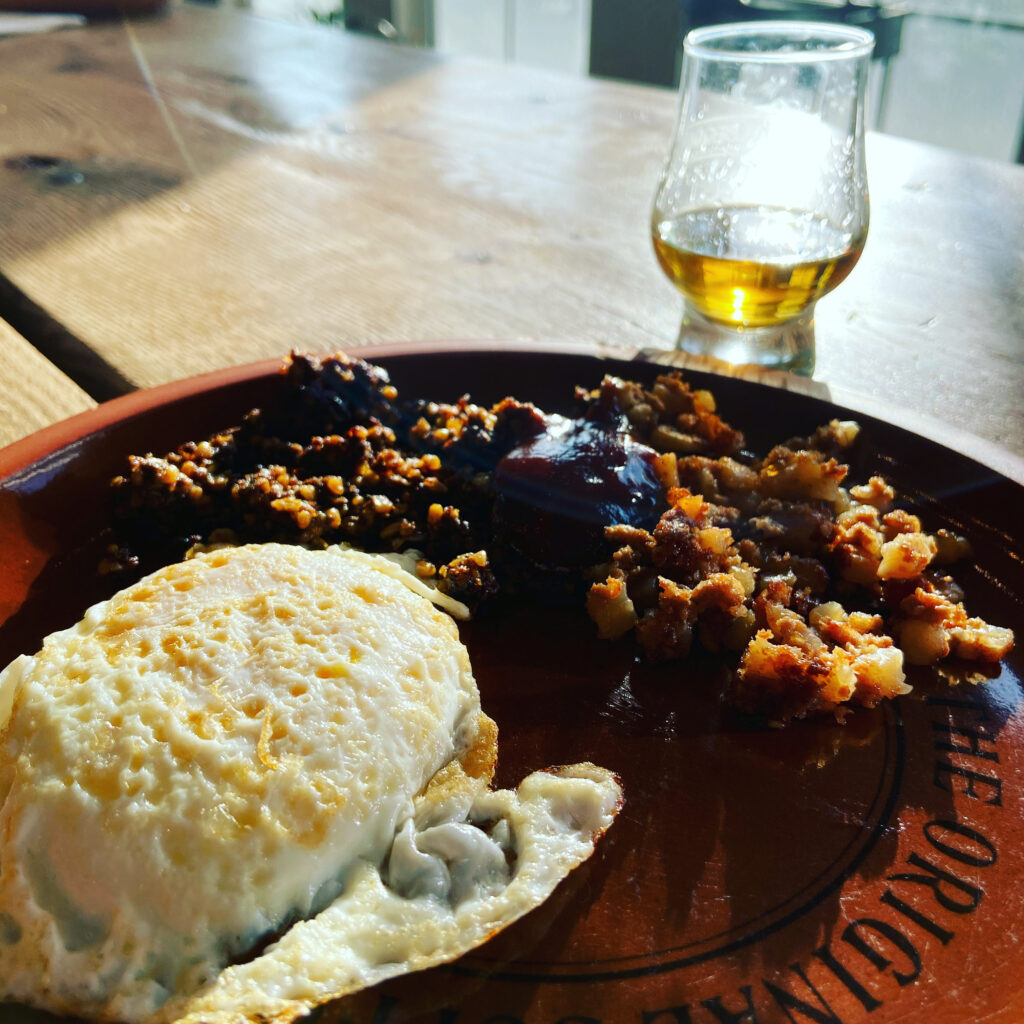 Christmas Dinner (Which We Serve at Noon)

Christmas dinner, in my family at least, was a repeat of the Thanksgiving meal we had enjoyed a few weeks before.  There is nothing wrong with this.  Dickens has promoted the idea of a Christmas goose and it seemed weird to not being eating some huge bird.  Every heard of roast beast?  To quote Dr. Seuss (every bit of a literary powerhouse as Dickens…):

Then the Whos, young and old, would sit down to a feast.

Which was something the Grinch couldn’t stand in the least.”

Seuss may have been talking about a bird, but around here, a beast is a beef and that means a huge prime rib. 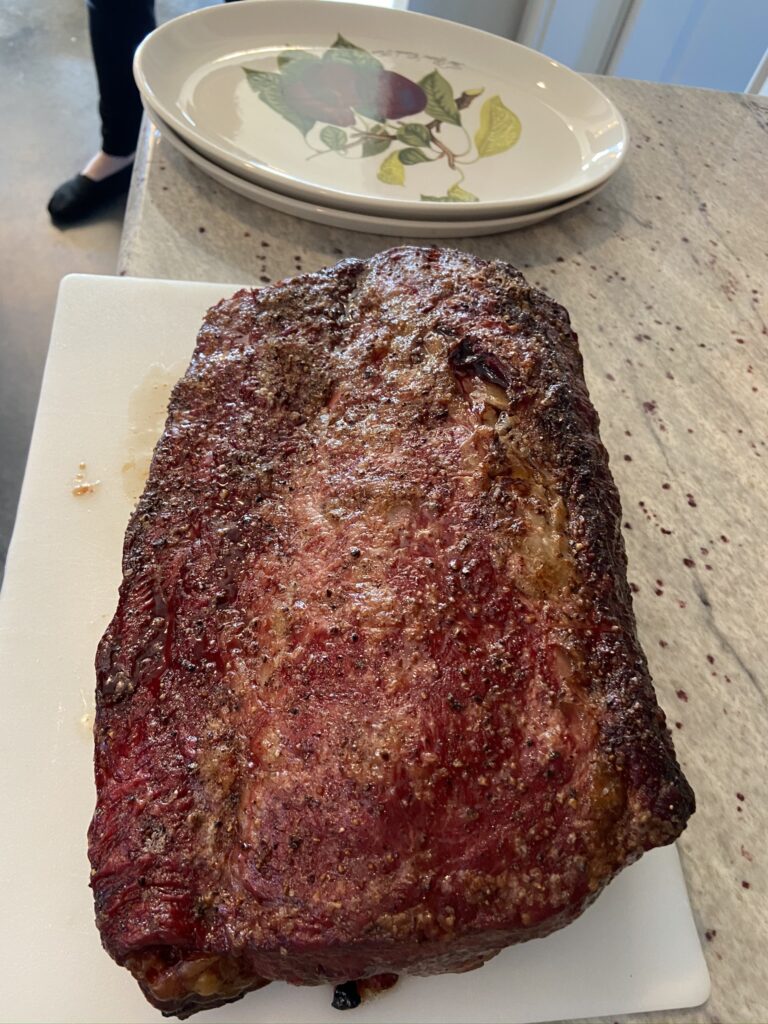 This year, Jerry purchased a Wagu roast locally.  It was one of the best we have ever had.  Jerry seasons it with salt and pepper only.  In the past, he as cooked it in the oven and in the infrared fryer.  This year, since he received a wireless digital meat thermometer that alarmed at different temperatures, Jerry placed the beast on the smoker and let the magic happen. 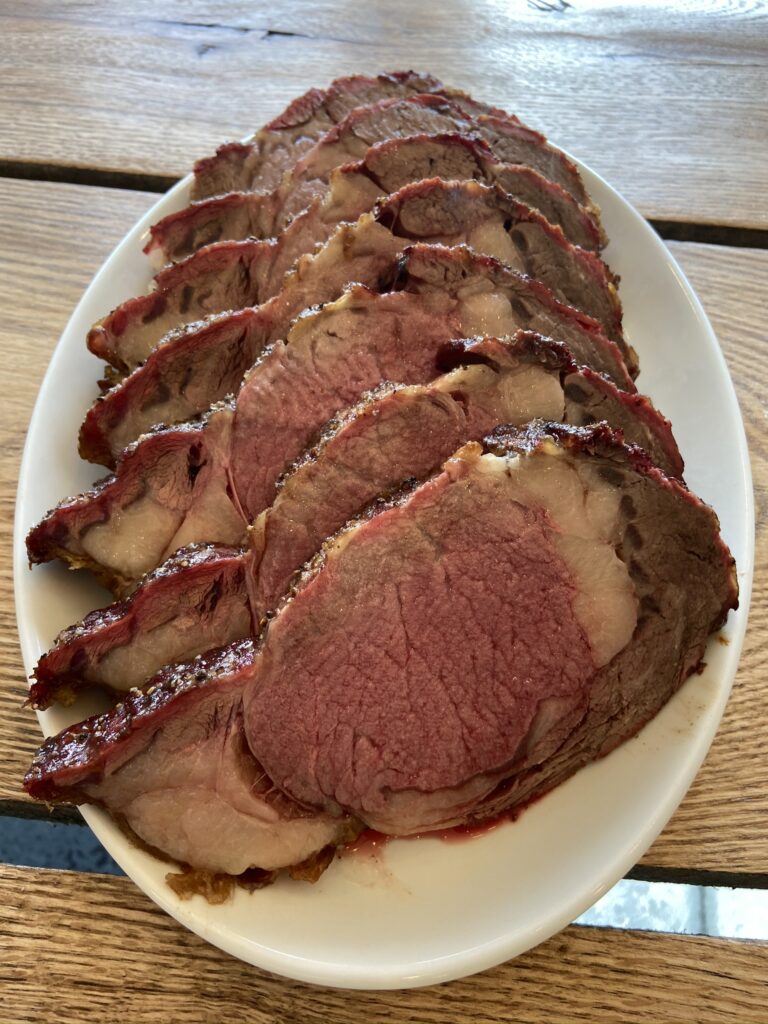 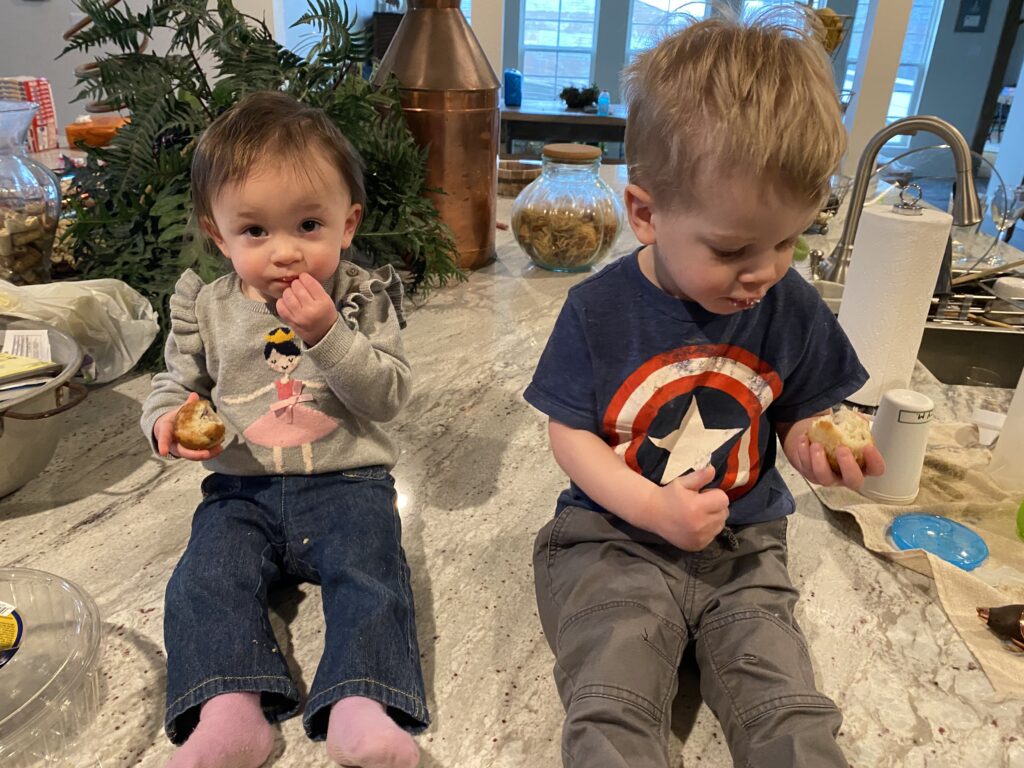 All the food is wonderful and I admit that I look forward to that part of the holiday a great deal.  I enjoy the planning of menus and the eating of it.  However, as with every other year I can remember, it was the people, not the food that made the holiday.

All of our kids were able to be here.  We were able to open our homes to some of our best and dearest friends for the cookie exchange.  My favorite part of the holiday was that we were able to have John Warren and Izzy here with us for all of it.  These two little ones spent lots of time on the island eating yummy treats, watching the cooking being done, and just spending time with family who adore them.  I think they had a good Christmas and hope that we can do it again next year!