Cheese making as a hobby is a pretty cool choice.  We are a cheese crazy family.  We love nibbling on all different types of cheese.  Indeed, we have spent a fortune at cheese counters around the world purchasing our favorites and trying out new cheeses.  It appeared to me that cheese making was a logical thing to learn.  But not all cheese is created equally as I quickly learned.  Cheese making can be a serious time commitment if you let it.  The time requirements vary greatly for different kinds of cheeses.  Some take months, some just a few days.   Some you drain the curds, salt and eat.  Others take more work than a newborn infant.

The trick is to decide what you want to eat and then determine if it is worth the work.  I casually mentioned that I wanted to learn how to make cheese and the next thing I know,  Jerry has ordered me a 30 minute mozzarella kit.  That was a great place to start.  For under $30, all the ingredients (except the gallon of milk) and tools needed to make mozzarella were in this kit.  The instructions are great and there is enough to make several attempts and a couple of types of cheeses (primarily mozzarella and ricotta).  I made the mozzarella and in 30 minutes, and it was delicious.  And then a couple of cheese making cookbooks showed up.

Because the mozzarella had been such a success, I thought I was ready to continue on my cheese jaunt.  What else could I possibly make?  Turns out, you can make any type of cheese and/or variation of cheese at home if you have the right tools, ingredients and environment.  When I said I was ready to branch out, Jerry was on the Internet finding plastic cheese molds, cheese presses, rennet, and molds and bacteria.  When the kitchen was littered with all the paraphernalia, I didn’t have much of a choice.  I was officially a cheese maker, but I still didn’t understand the time commitment or work that cheese making could become. 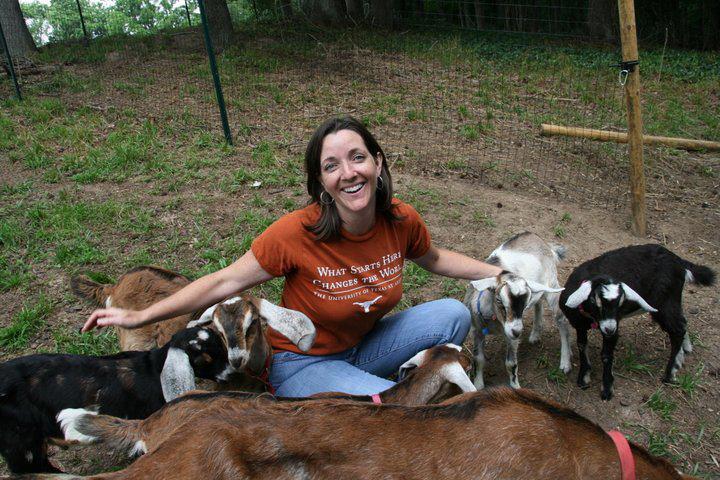 Did Someone Say Goats???

Okay.  If this doesn’t prove insanity, I don’t know what does.  But it was logical…sort of, anyway.  If you are going to make cheese, you need milk.  We like goat cheese, ergo we need goat milk.  Goat milk is difficult to find. (They sold it at Whole Foods.  It was so expensive, we might as well have just purchased the cheese…).  And that is how we ended up with goats.  Seven to be exact.  Two nannies, with two kids each, and a little orphan who got thrown in as a bonus goat.  By the way…there is no such thing as a bonus goat. 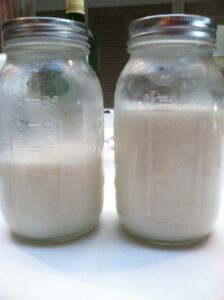 The goats required a barn with stalls so we could keep the kids from their moms overnight.  Otherwise, there would be no milk for me in the morning.  We also needed two grazing pens for the same reason, or there would be no milk for me in the evening.  I know you can do the math…I was milking two goats, twice a day.  They had to be fed and watered everyday.  The milk had to be stored and then pasteurized.  When I collected about a gallon, I could finally make cheese.  There was a lot of work and time committed to the process of cheese making and this is where I think we started going wrong.  I mean, I just wanted to make cheese, right? 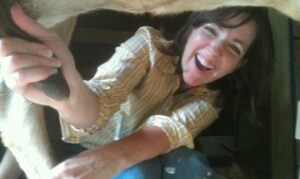 We didn’t know anything about goats.  But I found a great website that helped with everything.  It was several months before I finally understood the name of the site.  It should have been a warning, but at that point, it was too late for us.  The site is Fias Co. Farm.  And they are great.  There is information about cheese making and goat care (check out their goat wipes!).  It is here that we found the plans for the milking stand that made all things possible when it came to milking time. 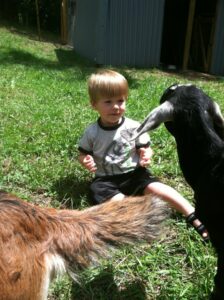 Yes…this post is meant to be about cheese making, but if you eventually decide that goats are the way to go, Fias Co. Farm is the one-stop location for anything related to goat care.  Goats are great at eating poison ivy and other problematic ground cover.  If they are eating your poison ivy, good for you. But be careful when you start to milk them or you will be covered in poison ivy, too.  And goats are wonderful.  I can’t tell you how much fun they were….until they weren’t.  There is nothing nastier than a goat with scours.  I’ll leave it there.

If we had gone about this logically (and by that I mean had I been moderating my entry into this new hobby and not Jerry trying to be supportive and encouraging), I would have started with store bought milk and would have stuck to the quick soft cheeses.  In hindsight, I may or may not have worked my way up to the more difficult and time consuming aged cheeses (probably not, I lose interest quickly on most things).  I think this would have been a loss.  I like learning and I learned a lot milking goats.  But there is something to be said for starting small and gaining experience before you dive into the deep end.

I Over-Committed to the Cheese

My reality was that we had goats and a kitchen full of equipment.  I just jumped in.  I selected a cheese from the cookbook and made it.  Why not? I thought.  Ha.  I just jumped in not thinking about the different requirements for each of the cheeses.  Maybe that was a good thing or maybe it wasn’t.  It did lead to learning, and that is always a good thing.

We bought a small wine refrigerator to keep the aging cheeses in.  I had a clipboard that listed all the cheeses and what I was supposed to do to them and when.  There was the one cheese who needed to be flipped in its brine daily.  One needed a brine wash every other day.  Another variety needed to be flipped every third day with a brine wash on odd days.  They all needed different temperatures and humidity levels.  In short, they needed more than I could provide.

And then, there were the delicious, uncomplicated soft cheeses that asked little of me.  They ones that were ready to be enjoyed in a week or so.  The cheeses that I made and then patiently waited on to be ready.  Yeah, I liked those better. They weren’t as much work and didn’t require as much of a time commitment as the aged, hard cheeses.

But the soft goat cheeses would still have needed goat milk.  My options was exorbitant prices at the store, or milk the goats myself.  I know this is maybe silly, but the idea of buying goat milk from an individual didn’t appeal to me.  The cheeses don’t have time for bacteria to die before you eat them in this soft cheeses like they do in the aged cheeses.  The milk has to be taken care of, goats clean and so on.  And I was in charge of that process to include pasteurization.  It felt safer to me.

This is what I learned during my year of daily making cheese.  I wanted to try something new, and the next thing I knew, my cheese making hobby was a huge time commitment.  You can get in over your head in a hurry.  Personally, I would think seriously before committing to goats again.  I still may do it, but I know what I am getting into this time!  The soft cheeses are definitely entry level cheeses, but are still delicious and impressive.  In fact, they turned out much better than the aged cheeses I made.  Sure, the big rounds of cheese look impressive, but the soft cheeses were all around a better deal.

And the main lesson I learned was that if something is taking up all of your time, and you can afford to purchase it, for heaven’s sake…go to the dang store.