Clearing Around the Well 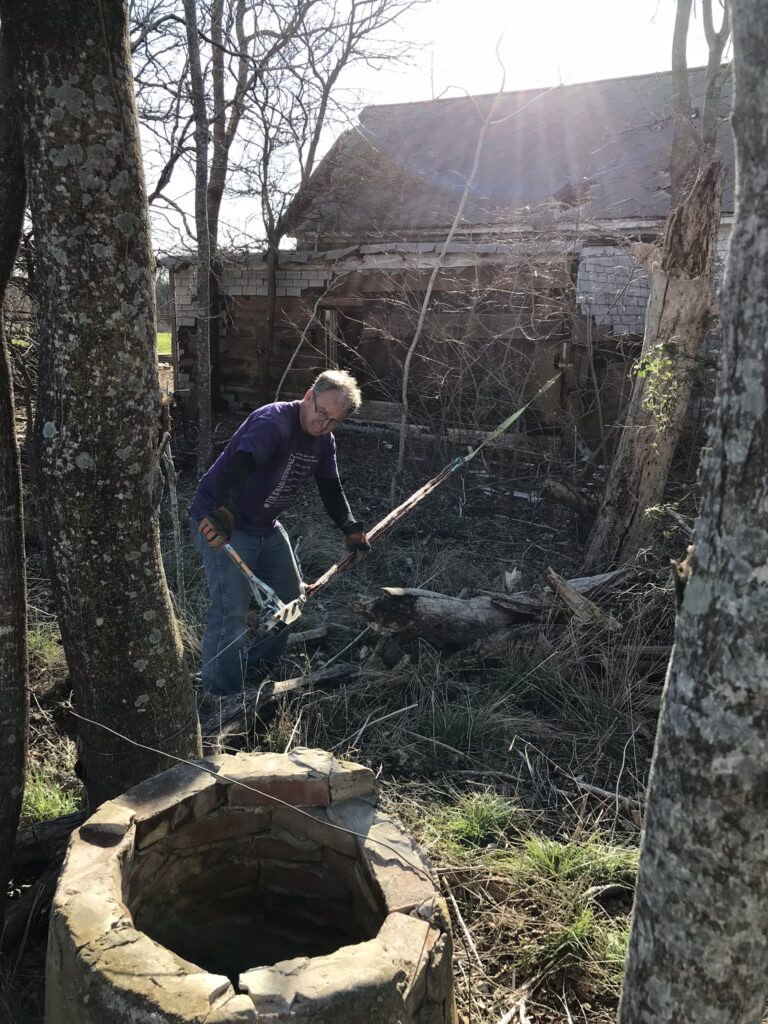 Benny Melton was going to come and clear the land so the foundation guys could get busy.  The old well is still in the back yard, but the back yard was super overgrown.  It was bad when we bought it and by this time we have been in the house working for five months.  Yard work is hardly a thing for us to concern ourselves with.

In the picture above, you can clearly see the well at the bottom.  You can also notice that the season is winter by Jerry’s long-sleeve shirt and by the lack of green growth.  By the time we were ready for Benny to come, the back yard was in full glory.  That means it was nothing but a tangle of briars, poison ivy, and grass that was hip high.  In short, it was a snake paradise.  It was a thick, dangerous mess.

But the well was important and we needed Benny to have a fighting chance.  Jerry grabbed the weed eater one Sunday after church and we headed over to just knock down the bulk of what was hiding the well.  We rounded the back side of the house, Jerry heading to the well, me staying in the pig trail we had made around the house while attempting to level it.  Of course, what do I encounter?

Yeah.  So it was long and it was fast.  I screamed.  Jerry scowled and asked a million questions like “what kind of snake was it?”  “where did it go?”  I had no idea what kind of snake it was beyond “long and skinny” (not helpful, evidently) and that it had “hauled butt” into the field.  Jerry exhaled heavily (from exasperation, not from exhaustion) and went back to work.  At least I knew it wasn’t a rattlesnake.

I was freaked out.  And there I was…perched, on a tree stump in the snake-infested yard.  Weeds surrounded me.  Everywhere I looked was a snake haven.  This was turning out to be a miserably, scary afternoon.  And then it got worse.

Have you ever felt like someone is watching you?  Yeah.  Perched on a stump in a snaky back yard, I feel eyes on me.  Jerry is busy and the weed eater was so loud that I had no chance of getting his attention.  Finally, he killed the engine and I casually asked him what the thing was that protruded from under a board.  I had just about convinced myself that it was a piece of rebar and not a snake.  I mean, the wind was blowing a gale and the object in question never moved.  It just stuck up about eight inches from under the board. 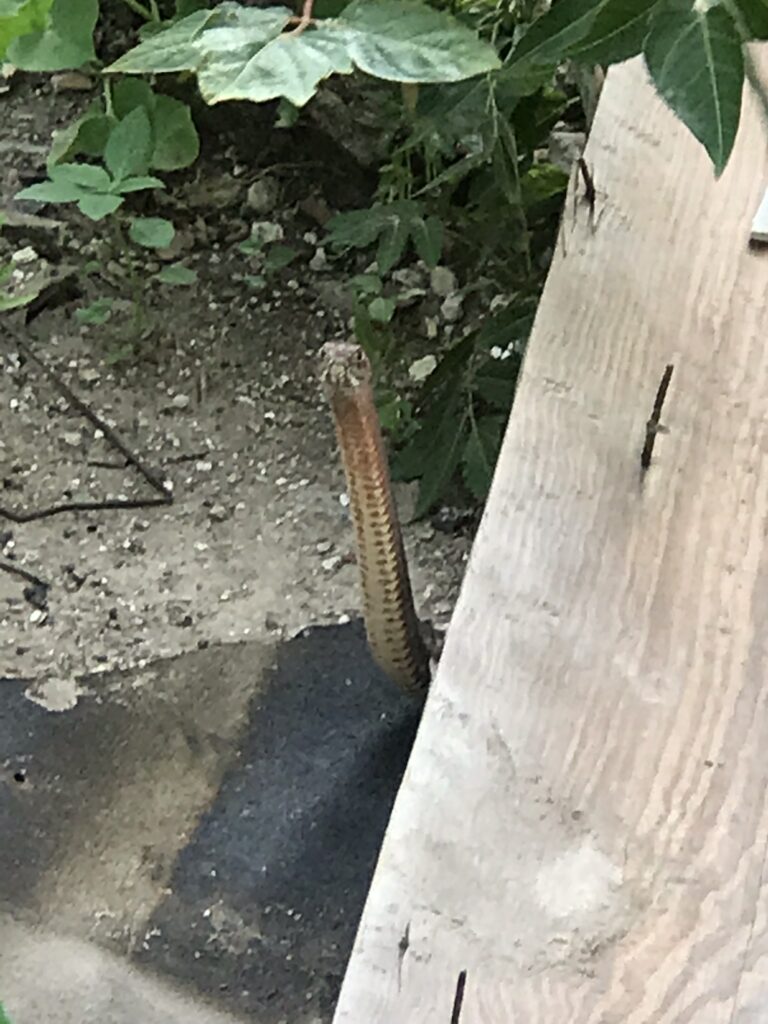 Jerry, bless his heart, is so used to me being afraid of snakes.  I was standing on a stump, calmly asking questions.  Jerry figured that it had to be something other than a snake.  But of course, he looks and decides that it IS a snake.  I took photos of it before I ran away with my feet never touching the ground so that we could identify it when we got home.

Something New and Unexpected

We started looking on the Internet at pictures of snakes.  I posted a picture of it on Facebook and got my friends on the task of identifying this unfamiliar reptile.  It appeared to be a Texas coachwhip snake.  And while it is non-venomous, it is probably the most terrifying snakes ever.  The information we read was that the snakes are curious and will circle back around and watch you (which is exactly what this one did!).  Happily, the myth that they will chase you across a pasture (no thank you) is false.  I just think that I need to get the house finished and stay inside my habitat while the snakes continue to enjoy theirs!