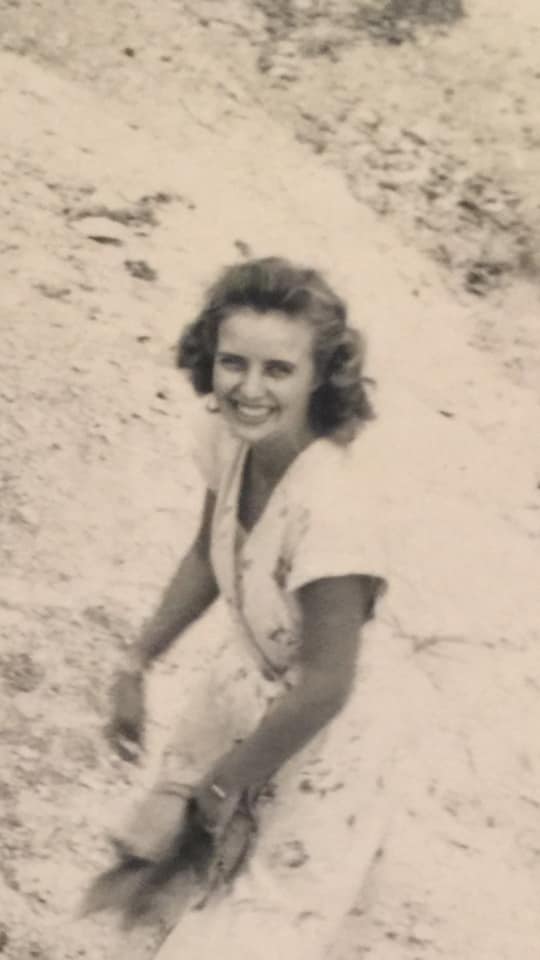 My Nana was a collector.  She collected family history, friends, flower seeds, and rolling pins.  The rolling pin thing stemmed from her love of family and family history.  The pins that she collected belonged to family members.  I think that nobody wanted rolling pins when they were breaking up a home after someone died.  I mean, they are just rolling pins after all.  I never asked her why she asked for rolling pins, but knowing Nana, I am willing to bet that it was because of their lack of value and importance.

The rolling pins she collected seem very valuable to me because they are so personal.  The women to whom they belonged used them often (daily?) and used them to provide for their families.  That seems pretty darn important to me, and, I assume to Nana.

Nana could see value where others didn’t.  She was capable of seeing value in people others had written off.  She made things matter…holiday traditions, baking our birthday cakes when we were little, taking us on picnics to the creek.  All things that mattered, upon reflection, greatly to her and to me.

And now we are in our “forever home” and Nana’s rolling pins need their forever home as well. 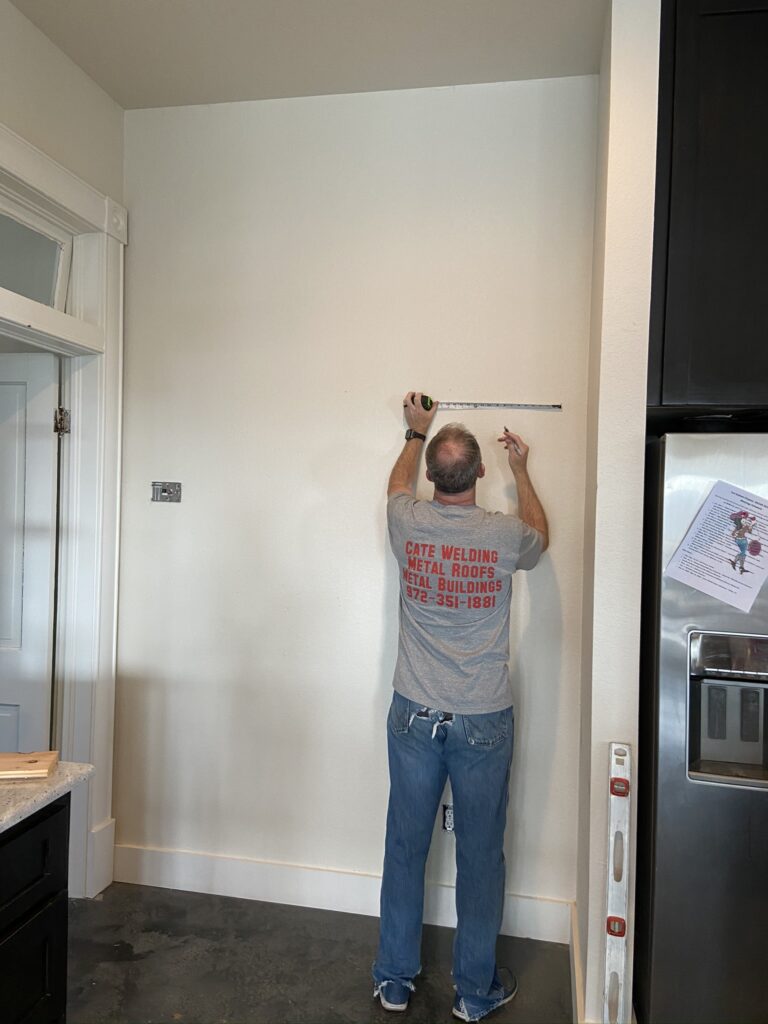 There was a smallish wall where we put in a couple of shelves for cookbooks.  I have a lot of cookbooks (mostly from Nana, of course) and we stashed them here when we moved in.  We never intended for the cookbooks to remain there permanently, we just needed them out of the boxes.  But here they remained for 10 months while we dealt with other projects.

This week, in preparation for our first Christmas in our new house, we began to complete projects that we had pushed back.  The rolling pin wall was project number three this week for us and it may be my favorite.  It is the only project that I cried (three times!) while we were working on it.  I think that this is because it is just so dear and so personal. 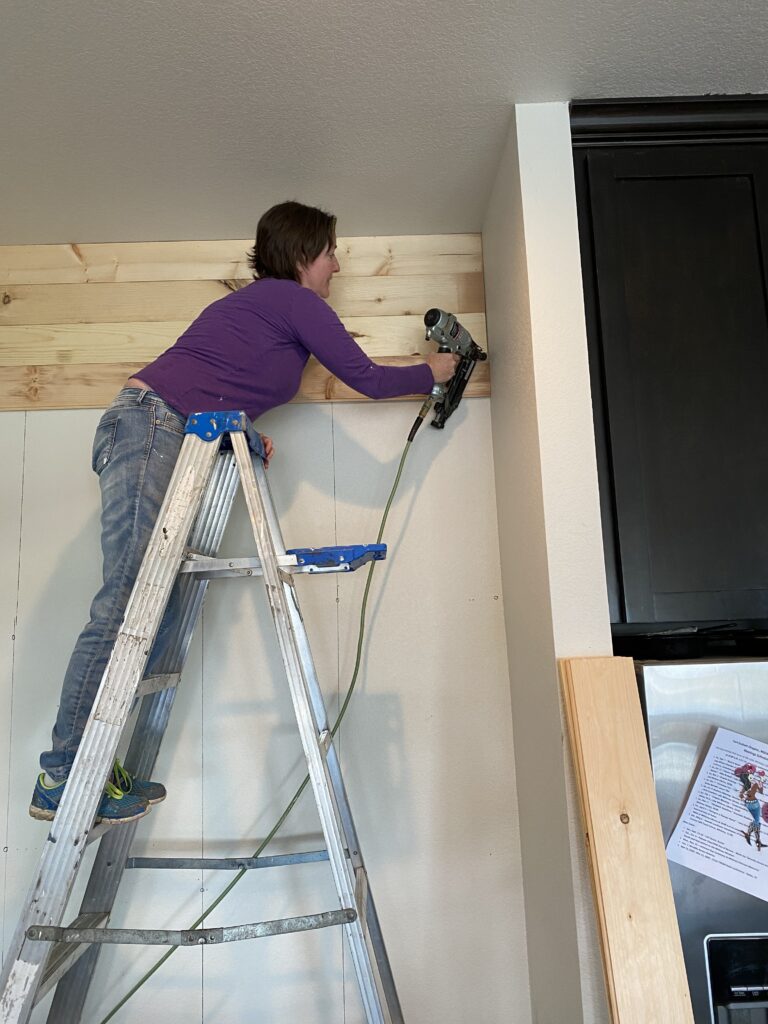 The first thing we did was take some of the left over white pine flooring we had and installed it floor to ceiling in the space.  I then mixed two parts water to one part paint (Shoji white…like the rest of the interior) to create a “white wash” for the boards.  We wanted the texture of the wood and its knots to show, but we needed the wall to be “painted” so that there would be contrast between the wooden rolling pins and the wall. 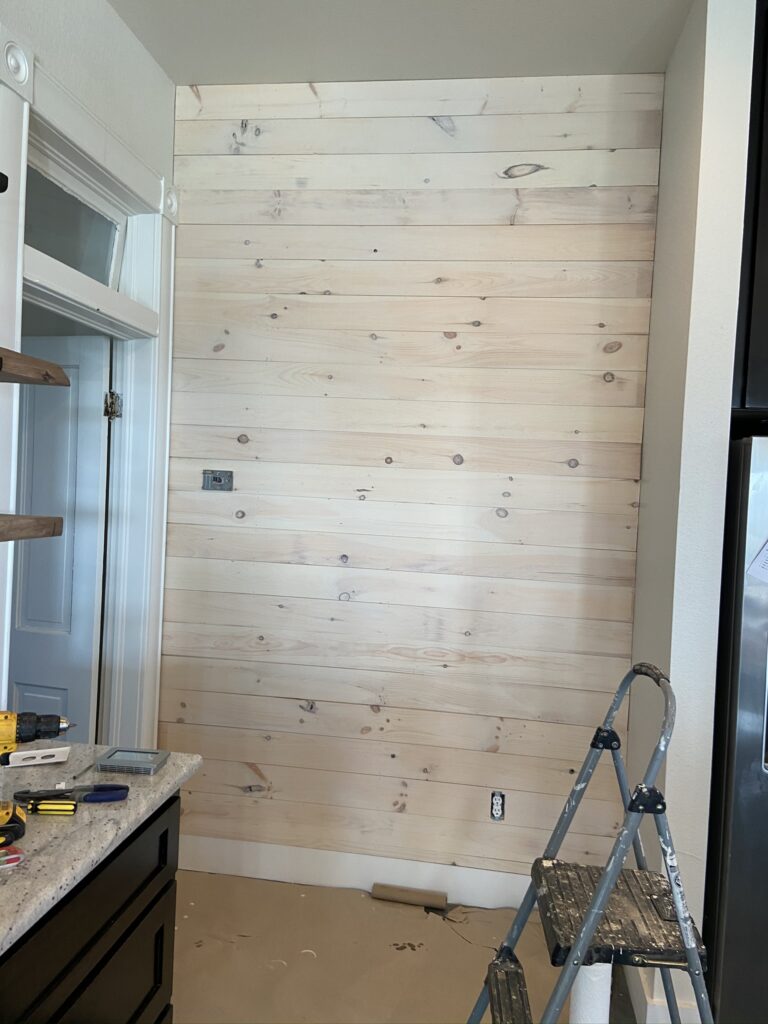 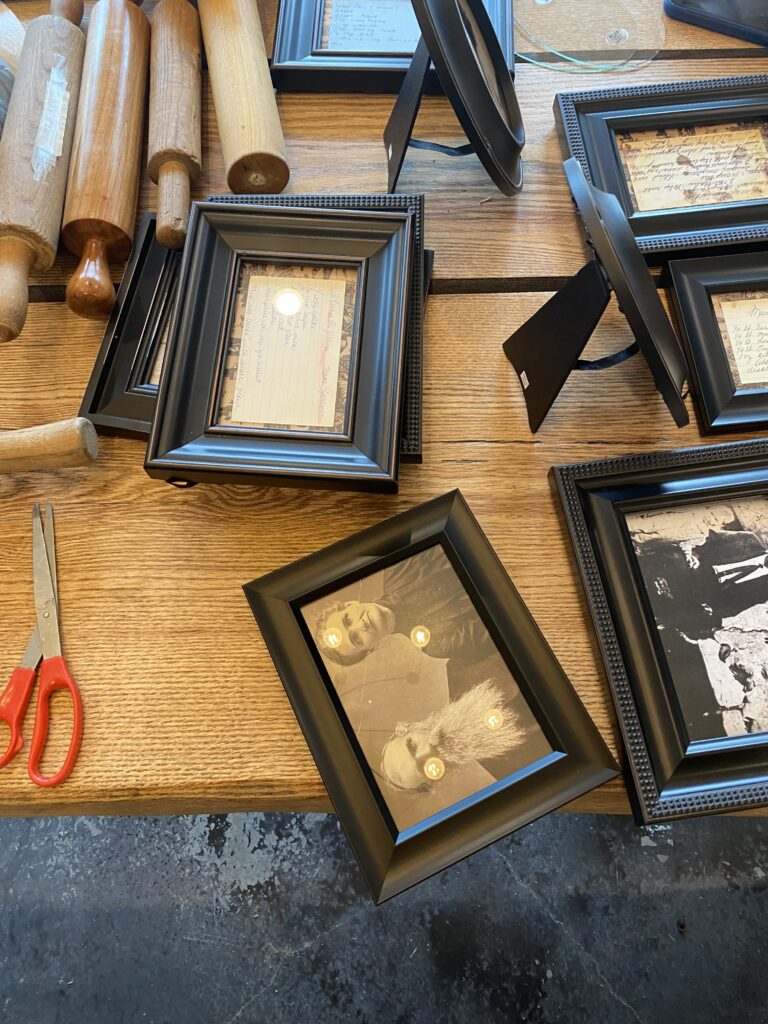 Nana had five rolling pins including her own.  Jerry’s dad gifted me with another one that belonged to his grandmother.  Another rolling pin (mine) came from John Deitrick.  John owns the property where my great, great, great grandparents lived.  He had a cherry tree taken down and my very own rolling pin turned.  In all, I have seven pins to display along with the photos of the ladies who used them and an assortment of recipes that belonged to them as well

We had to decide how to hang the rolling pins.  I opted for wire coat hooks.  They look old and farmhouse to me.  I ordered them from Amazon.  We went to Hobby Lobby next for frames.  I haven’t been in Hobby Lobby since we started working on the house.  I am so glad!  We would be broke!  Each aisle is endless possibility.  I was so distracted.

At any rate, we found frames we loved, but they didn’t have enough of them.  We came home and looked online for them, but they only came in a horizontal orientation and some of our photos are portrait.  Another DIY project!

We went back to Hobby Lobby (to the aisles we needed only…I wore really cute blinders) and bought an assortment of black frames.  We went to the jewelry aisle and bought chains that we could use on the frames. 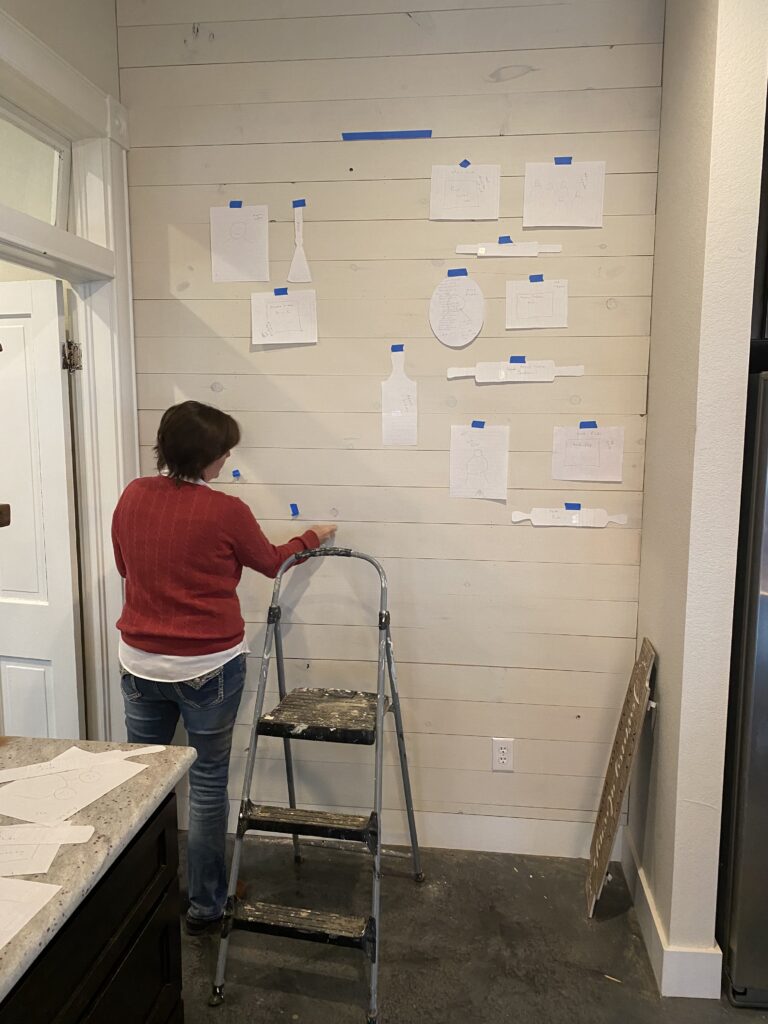 A blank slate is something to fear.  A blank wall is worse.  Bless Jerry’s heart.  He figured out a way to make arranging the wall a snap!  He cut out and labeled all the things that needed to go up on the wall out of paper.  Painters tape allowed me to arrange and rearrange with impunity! 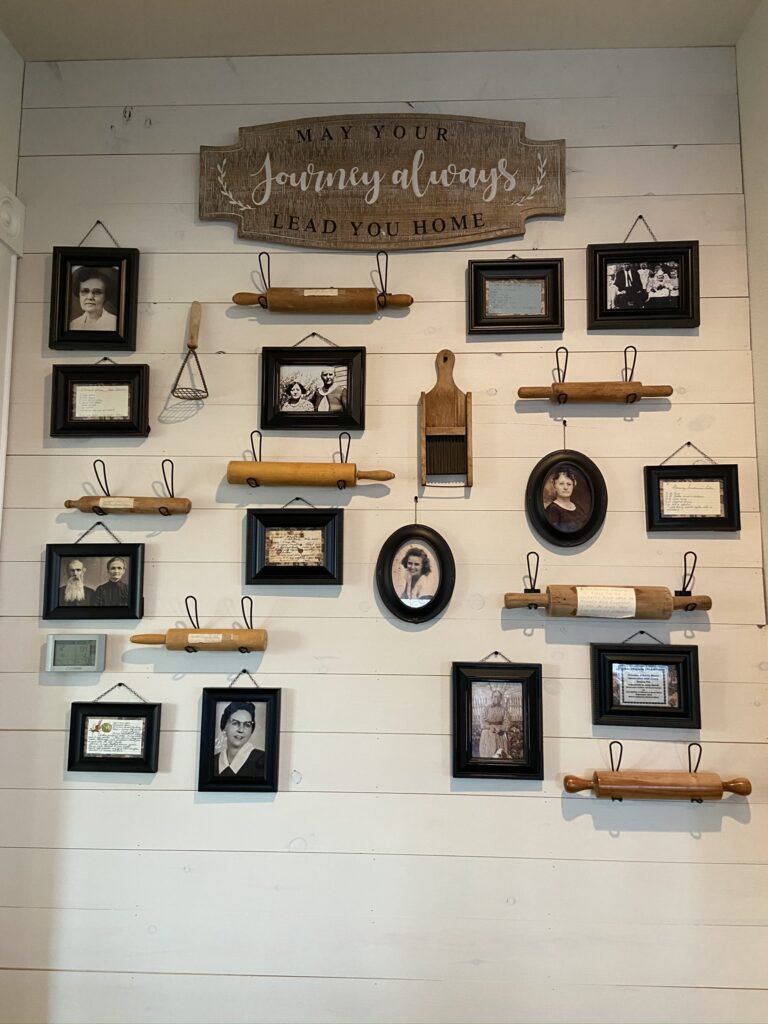 The templates made hanging the items a snap for Jerry.  I stood by and watched as the wall became a reality.  I have to admit that I may have shed tears on a couple (okay, three) occasions.  It was very sentimental to have these ladies in my kitchen watching over me as I continue to do what they did before me.  I did make peace with them.  I am not trying to live up to my ideas of who and what they were, but merely standing on their shoulders and appreciating all the heritage they created for me.

Who knew all of that could come from rolling pins?