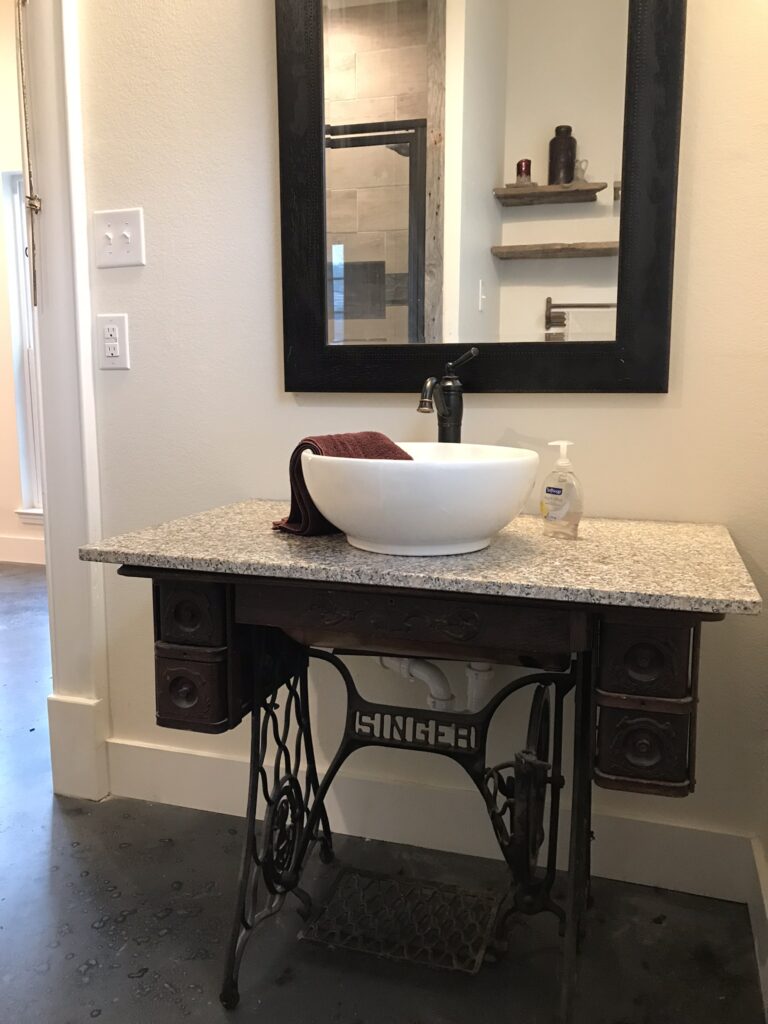 Keep It Old…Make It Old

I wanted to make sure that the old house still looked and felt old once the renovations were completed and that is why I doggedly stuck to my mantra of “keep it original”.  It didn’t matter if we had to scoop it up with a spoon and Spackle it into place, if the original could be patched and kept (within reason, of course) that is what we did.  And I think we did a great job.  I have caught some flack from an old house dude who said that all he could see was replacement windows and siding.

The original windows were already gone and the siding was a hodgepodge of rotting, warped, splitting original boards to asbestos tiles and asphalt roofing shingles nailed to the exterior.  The goal was to save the house while keeping it as original as possible.  We were never interested in getting a National Register of Historic Places plaque.  We just wanted to keep it from falling down and make it to where we could enjoy it.  If we get to pass it down to future generations, fantastic.

But keeping the old house looking old meant that there was going to be a huge difference between that interior and the interior of the addition if we didn’t plan it out correctly.  Another mantra became “put as much old into the addition as possible”.  And so, when something had to come out of the old house (the original flooring, siding, etc…), I knew that we could, should, and therefore would be reusing those materials in the addition.

The Best of Intentions 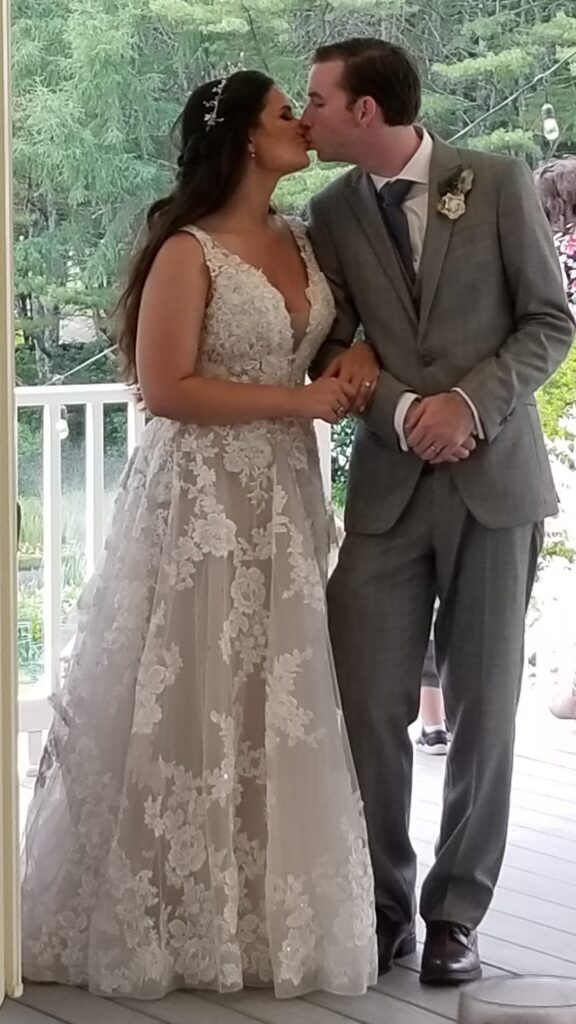 We have been in the house for about eight months now and are getting ready for our first holiday season.  Soon, Thanksgiving will be here and I can’t wait to have everyone around the table and to cook like a crazy woman on a range that is too large for everything I will be doing.  Seriously, y’all understand the holiday kitchen shuffle, right?

Christmas follows soon thereafter and I am very excited about that!  First of all, the grand babies will be all excited and their eyes will twinkle.  They will be so much fun this year.

Christmas will also mark Jordan and Anna’s first visit since we moved into the house.  Typically, they would have been here in September, but they got married in July and the summer was just too full.  All of my babies will be here for Christmas this year.

Oh, and have I mentioned that we are still not finished with the house?  There are so many things that need to be completed.  Some are small and would take no time and others are full on projects.  Why aren’t we plowing through them like we typically do?  Well…

Jerry is presently experiencing a “frozen shoulder”.  I’ll spare you the medical details, but I will tell you that all work on the house has come to a screeching halt.  He is in pain and can’t use the arm at all.  This has been the case for a couple of months.

Jerry is a helper and a doer.  This may sound crazy, but when he is unable to do work, I am sort of shut down as well.  Yes, I need his help on the majority of the projects.   There are several projects that I could be doing by myself, but I would have to be able to finish them while he was at work or he will be here trying to help me or feeling guilty while I work and he watches.

A Glimmer of Completion

Jordan and Anna will be here for Christmas.  We had been pushing back projects on their room because we had time (“We’ll do that later…they won’t be here until Christmas”).  Now we are running out of time and we are short a shoulder.  Luckily for Jordan and Anna, we completed their bathroom before the Great Shoulder Shut Down of 2019.

I wanted to let you guys see what we did in that bathroom because it has some really neat features.  First, the vanity is an antique Singer sewing machine.  The piece of granite on top of it is a piece we hauled back from our tour in Italy back in 1994-1996.  The shelves over the toilet were made from an old board we found in the attic of the old house.  The medicine bottles were found under the house.  I found the little red pitcher in the kitchen.  It has “To Mother, Christmas 1906” etched in it.  The large brown bottle is a baby formula bottle from 1880-1900.

The shower is one of my favorites in the house.  We went to Lowe’s and spent a couple of hours planning the bathrooms in the house.  We wanted them to be different and for them to appeal to the kids who would be using them.  This bathroom is Jordan and Anna’s bathroom, but it is also the powder room for the addition.

We went with a gray barn wood tile for the shower walls to continue the concept of the addition being an old barn we had re-purposed.  The floral tile on the floor is a nod to our sweet Anna being a tad bit of a girlie-girl.  We did an accent row of tile using a stacked slate material to give some definition and texture to the space.

Anna is an avid horsewoman and so our antique print of a hunting scene fit both her interest and the barn theme.  The metal hooks on a piece of original clapboard siding serves as their towel rack. 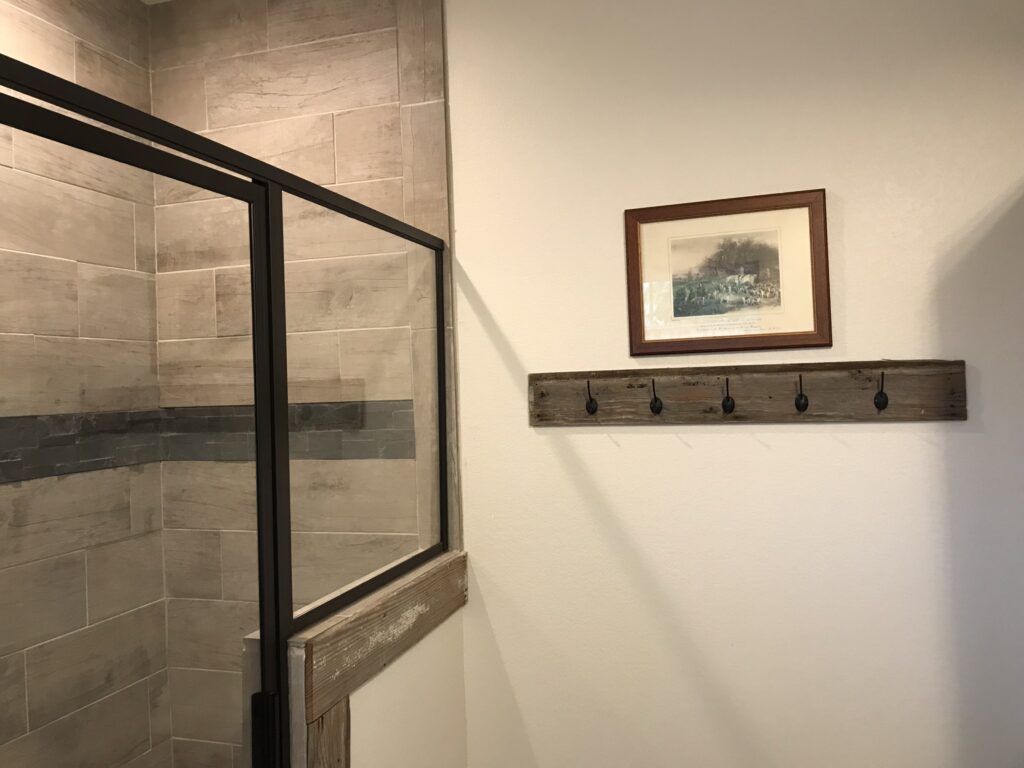 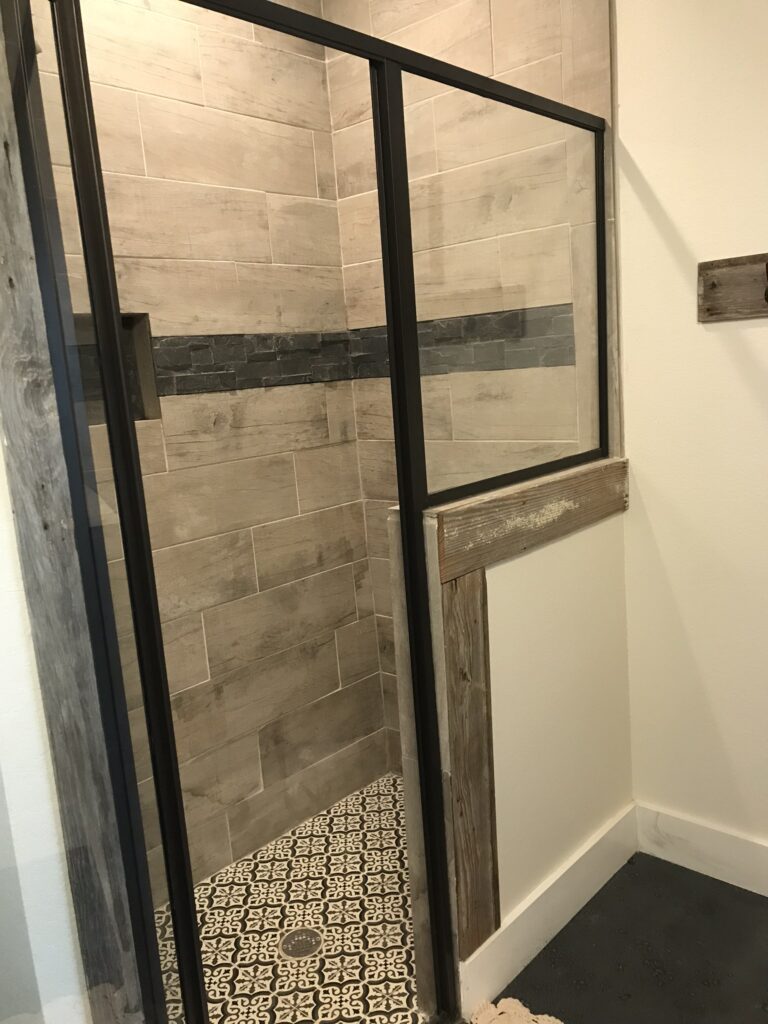 In addition to the above mentioned items, I just wanted to point out that the towel bar above the toilet belonged to my great, great grandmother, Mary Alice Painter Goodman.  She and her husband came to Texas from Virginia in the 1890s.  They built a house just outside of Mertens in Navarro County. They tore this house down years ago, and I don’t think I was ever in it.  However, Nana loved to collect little things that people used.  Mammy Goodman’s towel bar hangs in this bathroom.  Her ceiling lamp is in the entryway of the old house.  Mammy Goodman’s father carved a rolling pin for her when she got married in 1880s and that is in my kitchen.  Also, the embroidered towel hanging on the rack came from Nana’s stash of goodies.  People throw away old linen or keep it  in a drawer.  I think they do this because it can be difficult to find a place to display these pieces.  I’m glad I found a home for at least one piece of her linen to be displayed 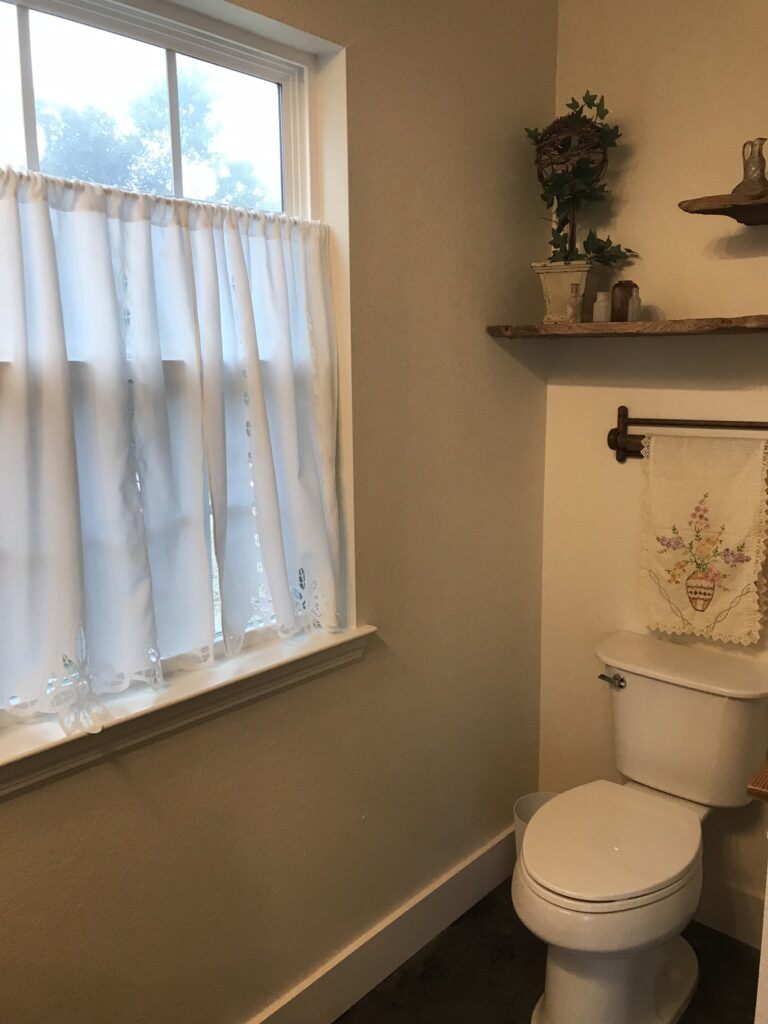